Putin quotes Tolstoy as he and Biden embrace shortcomings of summit 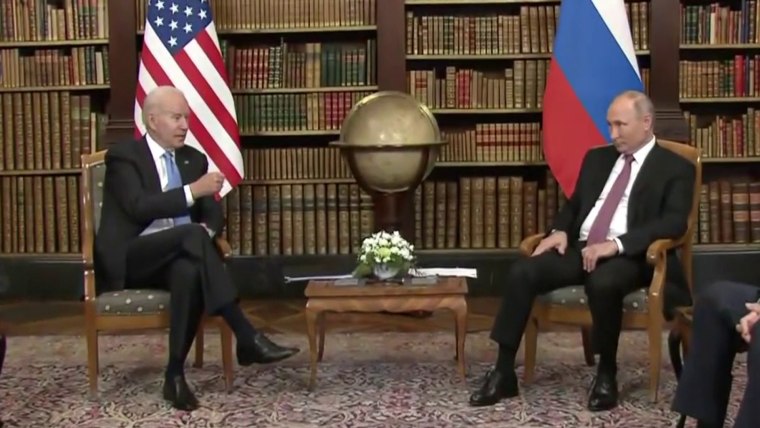 LONDON — Reflecting on his summit with President Joe Biden on Wednesday, Russian President Vladimir Putin reached for the words of a well-known compatriot.

“There is no solid happiness in life, only silent lightnings, a mirage of it on the horizon — cherish those,” Putin said, referring to a quote attributed to Leo Tolstoy, the Russian author. “And it seems to me that in our situation there can be no absolute ‘family trust.’ But I think the silent lightnings of it actually flashed by.”

It was a poetic moment for a strongman leader better known for his bare-chested expressions of macho power — and he wasn’t the only one in an apparently fatalistic mood.

“Look, this is not about trust,” Biden said of the U.S-Russian relationship. “This is about self-interest.”

Before the summit, both leaders agreed relations were at a historic low, and afterward Biden appeared to accept that a sudden rapprochement between the two adversaries was unlikely.

“This is not a ‘kumbaya’ moment,” he said at a news conference in the sun outside the lakeside Swiss villa where he had just met his Russian counterpart.

“I’m not confident he’ll change his behavior,” he said, alluding to the hacking, foreign election interference and human rights abuses allegedly committed under the auspices of Putin’s authoritarian Russia.

After previous failed attempts to normalize Washington-Moscow relations, this was a different message entirely: one of realism in terms of what might be achieved.

“This wasn’t a summit. It was really just a meeting,” Max Bergmann, a senior fellow at the Center for American Progress, told Reuters. “Neither side came expecting to achieve much because there currently isn’t much room for U.S.-Russia cooperation.”

But the pragmatic get-together in Geneva on Wednesday is one that many observers say suits both leaders just fine for the time being.

Russia is not considered a top priority for the White House these days, but rather more of a “nuisance” that needs to be managed so it can focus on the actual priorities of China, Covid-19 and climate change, says Jonathan Eyal, international director at the Royal United Services Institute, a think tank in London.

In this sense, Biden delivered an unambiguous message to Putin, saying the U.S. won’t tolerate Russia’s alleged misdemeanors, drawing up some “red lines” that it shouldn’t cross.

“Where I disagreed, I stated where it was. Where he disagreed, he stated,” Biden said. “But it was not done in a hyperbolic atmosphere.”

And after setting expectations so low, Biden and Putin were in fact able to eke out a few “deliverables,” including the reinstatement of expelled ambassadors and the resumption of strategic stability talks around nuclear arms control.

“This was about the U.S. trying to turn down the temperature in relations and to draw clear red lines with Russia,” Bergmann told Reuters. “The outcomes were thus small but potentially useful and important.”

For his part, Putin got what experts say he wanted: a day cast as a rival superpower — inflating Russia’s diminished geopolitical clout into something resembling its superpower status of old. And all while deploying a familiar tactic of whataboutism, responding to questions about Russia by pointing out flaws within the systems of the U.S. and its allies.

The Kremlin seemed pleased, at least.

“It was productive in the sense that the two leaders had the chance to directly explain their positions,” Putin’s spokesman Dmitry Peskov told Russian radio on Thursday. They were able to “more or less understand where they can cooperate and where, right now, they can’t cooperate because of categorical differences in their views.”

This pragmatism was a long way from 2009, when then-Secretary of State Hillary Clinton presented to her Russian counterpart a mock “reset” button in the hope that fraying ties could be repaired.

It was even further from President Donald Trump’s chaotic summit with Putin in Helsinki in 2018, in which he met Putin alone and unassisted by his aides, and then appeared to side with Putin over his own intelligence community over alleged Russian meddling in the 2016 election.

“There was no expectation this time that this summit was going to result in a settlement between the U.S. and Russia,” Eyal said. “There was never going to be an attempt at an Obama-style ‘reset,’ or an invitation to the family barbecue like George Bush” did when he hosted Putin in Texas in 2001.

Biden and Putin didn’t have lunch together, and there was no joint news conference after the summit where they could be peppered with awkward questions about their many disagreements.

That stood in contrast to the first part of Biden’s first trip abroad as president, where he dined with Queen Elizabeth II and met with leaders from the Group of Seven and NATO, part of his pitch to show the world that “America is back,” as he put it.

Biden was never going to afford the same treatment for Putin, who he recently agreed was a “killer” and reportedly told in 2011, “I don’t think you have a soul.”

The Russian leader has shown a different side in recent interviews, quoting passages from books and other cultural references, something he adopted during his interview with NBC News, broadcast over the weekend.

But while a little circumspection may have suited both men in Geneva, many experts in the West worry that there is still no long-term plan to deal with Russia’s disruptive actions at home or abroad.

“Russia is a mischief-maker,” Eyal said. “That’s the only thing they’ve still got to stay relevant.”