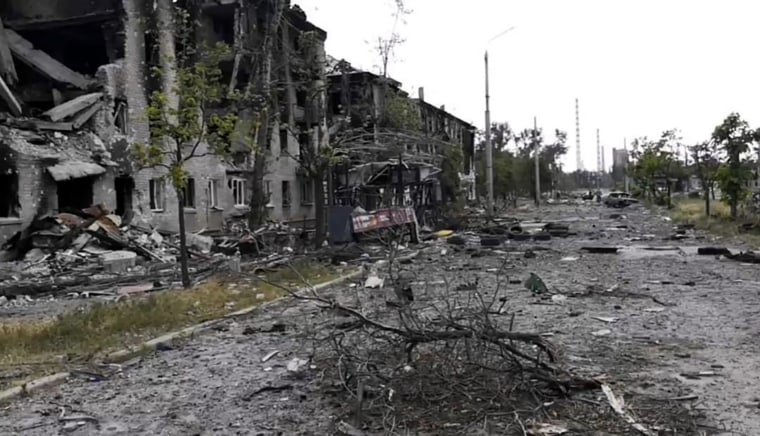 Ukraine appeared to be on the verge of losing a key eastern city Sunday in what would be a major setback in its fight against the Russian invasion.

Defense Minister Sergei Shoigu told President Vladimir Putin that Lysychansk and its surrounding areas were now under Moscow’s control, according to a statement Russia’s defense ministry posted to its Telegram channel on Sunday.

In an earlier statement, the ministry said that its forces had encircled the city, which was Ukraine’s last bastion in the Luhansk province. Russian troops were fighting inside the city, it said, adding that a contingent of Ukrainian forces had been trapped.

Lysychansk’s capture would provide the Kremlin with a major victory in the east after suffering a series of military setbacks early in the invasion, and set up its troops for moving farther into the Donetsk region, which together with Luhansk makes up the industrial region known as the Donbas.

The area has become the key focus for Putin after his troops were forced to retreat from the northern region around Ukraine’s capital, Kyiv.

There was no immediate reaction from Ukrainian officials to Russia’s claims about taking Lysychansk. NBC News has reached out to Ukraine’s defense ministry for comment.

But earlier Sunday, Luhansk’s regional governor Serhiy Gaidai, said in a Telegram post that the Russians were entrenched in the Lysychansk area.

“The city is on fire,” he said, adding that the Russians were attacking the city in “inexplicably brutal tactics.”

Moscow had thrown what appears to be all of its forces at Lysychansk, he said.

NBC News could not independently verify the battlefield reports.

But the Institute for the Study War, a military think tank based in the U.S., said Saturday that Ukrainian forces likely conducted a deliberate withdrawal from Lysychansk, resulting in the Russian seizure of the city.

In a Sunday morning update, Ukraine’s military said that the Russians were “concentrating their main efforts on securing positions” in the city and nearby areas. But it did not say that the city had been taken over.

Were Russian forces to take Lysychansk, it would come just over a week after they seized its twin city of Sievierodonetsk after weeks of intense street fighting.

Elsewhere, at least four people were killed by a series of blasts in the Russian city of Belgorod, the regional governor said Sunday.

Vyacheslav Gladkov said in a Telegram post that 11 apartment buildings and nearly 40 private homes were damaged. He added that three Ukrainian citizens were among the dead.

Russia’s defense ministry later accused Ukraine of striking the city with ballistic missiles. It said the ​​attack was “purposefully planned and carried out against the civilian population.”

There was no immediate reaction from Ukraine to Russia’s claims, but NBC News could not independently verify the reports.

Moscow, however, has repeatedly accused Kyiv of attacks on Belgorod, a city of nearly 400,000 that sits some 25 miles north of the border with Ukraine, as well as on other border cities.

Ukraine has never officially claimed responsibility for the attacks.

Meanwhile, Ivan Fedorov, the exiled mayor of the occupied Ukrainian city of Melitopol, said in a Telegram post Sunday, that Ukrainian forces had fired on one of four military bases in the area.

The head of the Russian-installed council in the Zaporizhzhia region confirmed the strikes but said no one was killed.

Despite being battered in the east, Ukrainian forces have made some advances elsewhere, including forcing Russia to withdraw from Snake Island, a key Black Sea outpost southeast of the port city of Odesa, which Moscow captured at the start of the war.

Russia had used Snake Island to impose a blockade on Ukraine, one of the world’s biggest grain exporters and a major producer of seed for vegetable oils. The disruptions have helped fuel a surge in global grain and food prices.

Moscow denies that it has been blockading Ukraine’s ports, blaming Kyiv for not de-mining the waters instead.