For a week, all eyes were on the Suez. Here’s the story of how it was unblocked.

Home WORLD NEWS For a week, all eyes were on the Suez. Here’s the story of how it was unblocked. 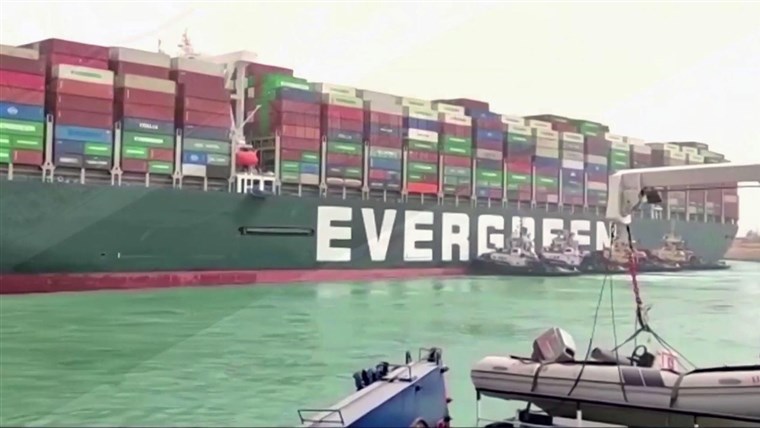 Eslam Negm is no stranger to disarray on the Suez Canal.

As a sailor on rescue tugboat Baraka 1, the Egyptian regularly confronts fires, evacuations and loading problems on the 50 or so cargo ships that transit the canal daily.

But when Negm got a call from his manager last week to help refloat a stranded container vessel, he said pictures did not prepare him for the days of havoc ahead.

The giant ship was traveling from China to the Netherlands, carrying upward of 20,000 shipping containers, when it turned sideways near the southern end of the canal early on March 23. Its bow became jammed in the canal’s sandy eastern wall, with its stern lodged against its western wall.

The canal was blocked, and a good portion of global shipping traffic was backed up behind it.

Early reports suggested strong winds and poor visibility from a sandstorm were to blame, and the causes are now the subject of a lengthy and high-profile investigation.

But for Negm and hundreds of other workers, the remarkable rescue of the Ever Given cargo ship was a job, and a memorable one. In a series of interviews with NBC News, he and other maritime workers described a massive and international operation that relied on hard labor, new technology and ultimately the moon to free the ship. While the world marveled at the skyscraper-size vessel and fretted over the backlog, it was local workers, engineers and tugboat captains who toiled through sleepless nights and hungry days to restore shipping on the canal.

That’s because Suez is not just a cornerstone of national pride and a crucial international trading route, but a vital source of income and job security for thousands of Egyptians.

Sleepless on the Suez

As initial rescue efforts floundered, the Egyptians were joined by international salvage teams that brought the expertise and brawn necessary to dislodge the 220,000-ton ship.

The Suez Canal Authority gave orders while a Dutch firm that specializes in salvage operations acted as project manager, guiding a fleet of tugboats, dredgers and diggers.

Negm and the hundreds more involved in the rescue worked around the clock and against the current in freezing conditions. Acting as a lifeline to the stranded tanker, the Baraka tugboat was connected by cable to the ship’s bow.

Frustrations among its 20 crew members ran high as the Ever Given remained stubbornly unmoved.

To free the ship’s jammed bow, dredgers worked around the clock to clear at least 27,000 metric tons of sand to a depth of 60 feet.

The work was not just difficult but dangerous for those toiling in the Ever Given’s vast shadow.

“We were working under something the size of a 10-story building that could have fallen on us,” said Aly Awamy, a mechanic on the Mashhour dredging ship.

As he looked up at the wedged tanker, Shalabi, the Baraka technician, recalls thinking that it looked as if the boat had been driven like a car swerving another “abruptly and about to hit the pavement.”

Bahaa Ramadan, a mechanical engineer, was walking from his village perched high on the canal’s west bank to his office in Ismailia on the morning of March 24, a day after the initial grounding, when he first spotted the unusual sight of a ship lodged “totally” sideways.

He watched from his office’s roof as each day came and went with little progress in unblocking the waterway. The news consumed the surrounding rural villages, he said — locals hadn’t talked about the canal this much since it closed during the 1967 war, when Egypt and other Arab nations were dealt a crushing defeat by neighboring Israel.

In Cairo, Mohamed el Gamel was fielding frantic WhatsApp messages at 5 a.m. Gamel, the CEO of Maridive, an Egyptian maritime and oil service company, was organizing the arrival of a tugboat that was stationed hours away from the crisis point in the gulf of the canal.

After initially turning down Maridive’s offer to help, canal authorities asked for backup once they realized the size of the task in front of them. The company’s tugboat was eventually positioned on the opposite end of Baraka 1 to help pull out the ship’s stern.

The crisis was now not just the talk of Egypt’s 100 million residents, but much of the world.

And pressure was mounting, with the maritime traffic jam holding up at least $9 billion in trade a day and forcing a growing backlog of vessels carrying oil, consumer goods and livestock.

And by the end of the week the rescue effort had become an international affair. Danish maritime operation provider Svitzer sent two tugboats to sail 10 hours from their station at Port Said to join the growing fleet surrounding the massive cargo ship.

Kaspar Friis Nilaus, the company’s CEO, said, “It was a huge team effort with canal officials coordinating the whole thing.”

The ship made its first move since the grounding on Friday evening, but weather conditions frustrated any hopes of a breakthrough and its bow remained jammed in the sand and dirt.

“It was high adrenaline for several hours,” said Shahira Zeid, chairwoman of Maridive.

A “new generation” Dutch tugboat came to the scene on Sunday with a pulling power double that of the Baraka, playing a major role in eventually liberating the ship, Negm said.

“The arrival of the last ones, the very, very big ones. That was needed,” Nilaus said.

Then at dawn on Monday, March 29, after six days, the elements aligned.

For all the human toil and modern equipment, the rescue efforts ultimately relied upon a power beyond their control: the tides.

“When it comes right down to it, we’re still relying on the same seamanship. It was the moon and a moontide that helped float the vessel,” said Andrew Kinsey, a maritime risk consultant for Allianz.

Staring down from the bridge of the tugboat he had manned for the best part of a week, Negm could scarcely believe his eyes as the Ever Given began to budge.

Said his shipmate, Shalabi: “No matter how hard I try to articulate how I felt, I will never be able to give that feeling justice. Everyone was completely ecstatic.”

Partially refloated in the morning, the ship was finally freed at around 3 p.m. local time, allowing the canal to reopen later that night.

Initially vilified as false rumors surfaced on social media in Egypt that canal workers had intentionally shut down the vital trade route, the Suez rescuers were quickly hailed as heroes by the local press and their government.

Ramadan, the office worker, said many villagers thought the rescue was “an absolute miracle” that defied logic after they had seen just how jammed the ship was.

Chants usually reserved for soccer stadiums swept cafes and outdoor spaces, but for Negm it was his mother crying on the phone as she called to congratulate him that made it all worthwhile.

“She knew how difficult this problem was because she also worked on the Suez,” he said.

As that happiness begins to settle, investigators have many questions to answer, including the cause of the accident and who will pay for the damage done.

After a severe dust storm and strong winds were initially cited as causes for the ship’s grounding, Rabie, the canal authority chairman, said Sunday that “technical or human errors” could have also caused it.

Kinsey, the risk consultant and former ship captain, who has taken dozens of trips down the canal, said that in such crises there is rarely a single cause, but rather a chain of events, or what sailors call an “error chain.” When a ship is that wide, he said, the “delicate balancing act” between its captain and Egyptian canal pilots leaves an extremely slim margin of error.

To pass through the canal, a vital corridor between Europe and Asia that helps shorten voyages and speed up trade, ships must pay authorities an administrative fee and enlist the help of dedicated pilots who help guide their voyage through the narrow channel.

Tales of demands for cartons of cigarettes by canal staffers — many now retired sailors from the Egyptian navy — are common and can add to tense relations.

“They don’t ask for one or two cartons. They go about their numbers, like 12 or 20 cartons,” said Suraj Joshi, a former Merchant Navy sailor.

The pilots are likely to be one focus of the probe in the months to come, but other former sailors and canal officials concurred that ultimate responsibility for navigating the canal lies with the captain.

As the Egyptian authorities lead an investigation that will analyze the ship’s black box, the ship’s fate is managed by what John Konrad, who runs the maritime news website gCaptain, calls an “international conglomerate,” leaving many parties ready to point fingers and shift blame in a maritime compensation battle that will likely last years.

It’s a transcontinental affair, since the ship’s owners are Japanese, the operator is German, the insurance company is British, the charter is Taiwanese and the canal pilots are Egyptian — all while the ship itself is flagged to Panama.

“It’s done that way on purpose,” Konrad, a former ship captain, said. “Because no one has skin in the game except the captain and the cabin crew.”

A spokesperson for Bernhard Schulte Shipmanagement, the ship’s technical operator, told NBC News that initial investigations “have ruled out any mechanical or engine failure onboard.”

The Suez Canal Authority and Shoei Kisen Kaisha Ltd., the company that owns the vessel, both declined to comment on the investigation while it is ongoing. Evergreen Line, the ship’s charter company, did not respond to a request for comment.

Canal officials and experts say answers may lie in the ship’s black box, known as the voyage data recorder.

Rabie, the canal authority chairman, told Egyptian TV on Thursday that the captain hadn’t handed the box over to investigators yet, presumably because he is in the process of hiring a lawyer to represent him.

The ship, meanwhile, may be free but it has not yet left the canal.

Divers are inspecting the Ever Given for damage while it waits indefinitely in the Great Bitter Lake, before finally continuing its voyage.