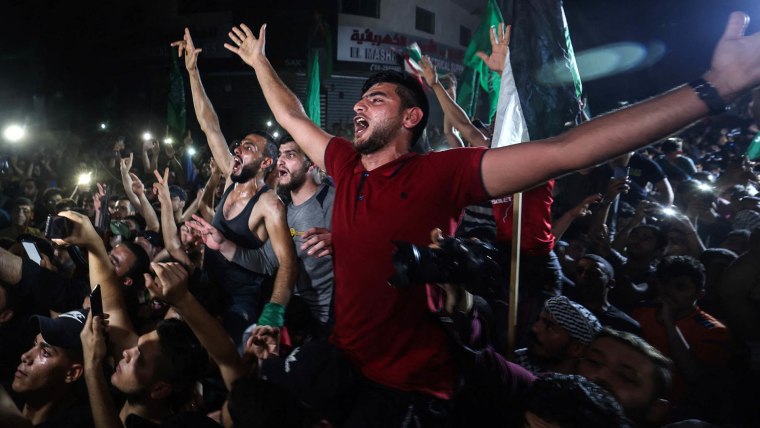 Fresh clashes broke out at the Al-Aqsa Mosque compound in Jerusalem on Friday, just hours after a cease-fire between Israel and the Palestinian militant group Hamas took effect.

Images from the holy site — a flashpoint for the tensions that ignited the 11-day conflict — appeared to show Israeli police firing stun grenades and tear gas, while Palestinian protesters hurled rocks and stones. Police said later that officers only used non-lethal weapons and 16 people were arrested.

It was the first sign of fragility in the truce that brought the latest Gaza conflict to a halt Thursday after nearly two weeks of fighting that left hundreds dead.

There had been no reports of violations early Friday, though each side said it stood ready to retaliate for any rocket attacks or airstrikes by the other side.

Egypt, which mediated the agreement, said it would send two delegations to monitor the cease-fire.

Secretary of State Antony Blinken is also due to travel to the region “in the coming days” and will meet with Israeli, Palestinian and regional counterparts, the State Department said Thursday.

Immediately after Friday prayers, hundreds of Palestinians held a celebratory demonstration at Al-Aqsa in which they waved flags and banners — some in support of Hamas, which governs the Gaza Strip.

It was unclear what triggered the subsequent clashes between the Palestinians and the Israeli forces.

Police in Jerusalem described the disruption at the compound, also known as the Temple Mount, as a “riot.”

“As soon as the noon prayer service ended, a riot broke out,” a spokeswoman said in a statement.

“Following this, the Jerusalem District Commander, Doron Turgeman, ordered the police forces to enter the Temple Mount and deal with the rioters … and at the same time allowed uninvolved people to leave.”

The confrontations died down within about an hour, with Israeli police retreating to positions at the compound’s gates, it said.

He vowed to respond with “a new level of force against any expression of aggression against communities around Gaza and any other part of Israel.”

Palestinians had rallied in the streets by the thousands after the cease-fire took effect, most in a jubilant mood.

More than 10 days of aerial and artillery bombardment killed at least 243 Palestinians — including at least 66 children, according to the Gaza Ministry of Health — and brought devastation to the already impoverished Gaza Strip.

Hamas rocket barrages also brought life to a standstill in parts of Israel and led to at least 12 deaths.

The truce comes after international diplomatic efforts and growing pressure from Israel’s closest ally, the United States, to bring an end to the most intense conflict between Israel and Hamas since the 2014 war in Gaza.

In remarks from the White House shortly after the cease-fire was announced Thursday, President Joe Biden said the United States “fully supports Israel’s right to defend itself.”

He added that there was also a “genuine opportunity” to move toward a situation where Israelis and Palestinians can “live safely and securely, and enjoy equal measures of freedom, prosperity and democracy.”

What began with clashes that first erupted weeks ago in Jerusalem boiled over into a conflict that spread far beyond the city’s ancient walls — leading to a wave of civil unrest within Israel and protests across the world.

Clashes between Israeli police, Palestinian worshippers and nationalist Israelis — as well as plans to evict Palestinian families from land claimed by Jewish settlers in the east Jerusalem neighborhood of Sheikh Jarrah — led to days of violence in and around the Al-Aqsa Mosque earlier this month.

Hamas began launching rockets at Israel on May 10 as the group vowed to make the country pay a heavy price for its treatment of the third-holiest site in Islam, which sits in a compound sacred to both Muslims and Jews. Israel then responded with airstrikes on Gaza.