His country is sinking. So he’s rolling up his pants to make the point at climate summit.

Home WORLD NEWS His country is sinking. So he’s rolling up his pants to make the point at climate summit. 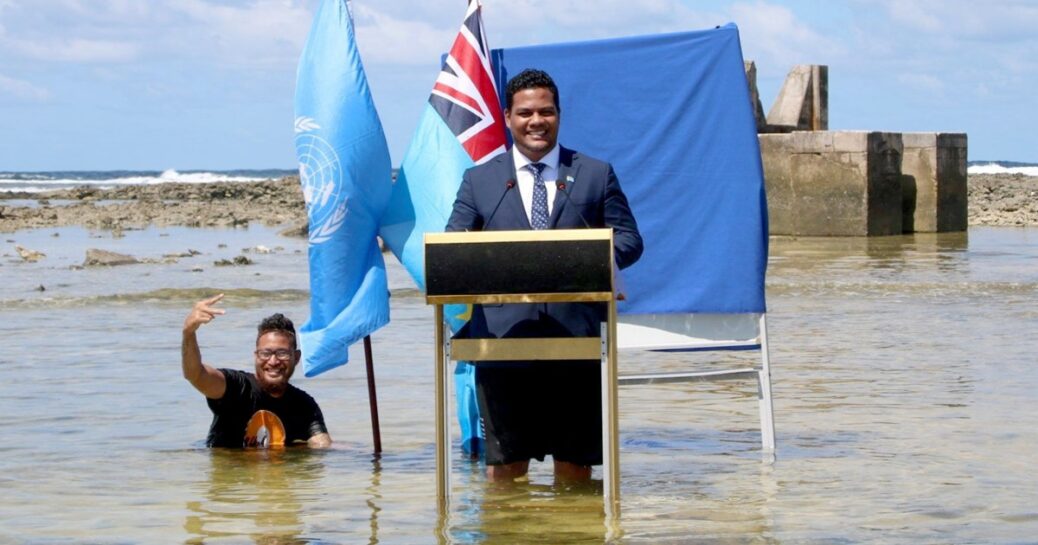 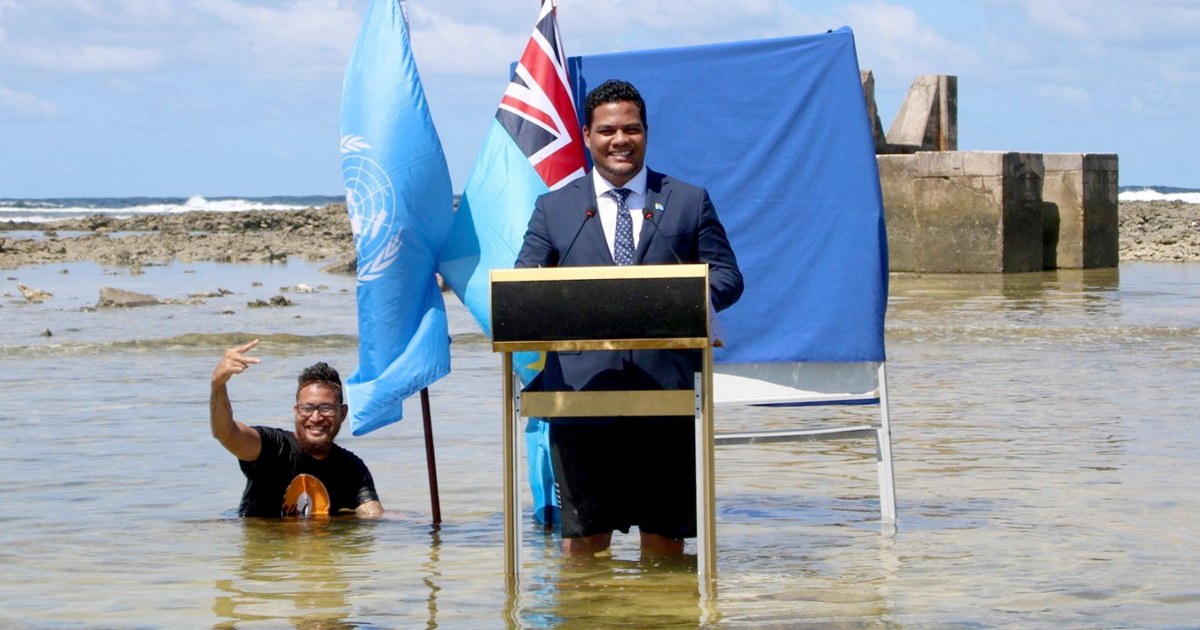 In a prerecorded speech set to be aired at the summit on Tuesday, the Pacific island nation’s Foreign Minister Simon Kofe is dressed in a suit and tie at a lectern in the water, his pant legs rolled up to his knees as he stands on what used to be dry land.

Waters around Tuvalu, whose highest point is about 15 feet above sea level, are rising about 0.2 inches per year — faster than the global average. Like many of its neighbors, Tuvalu is warning that without global action, its land will almost certainly be submerged entirely.

Pacific island nations like Tuvalu are among those most at risk from climate change, but coronavirus outbreaks and the difficulties of traveling in a pandemic have kept most of their leaders from attending the summit in Glasgow, Scotland.

In his speech, Kofe said the eight islands of Tuvalu were “sacred” to its 12,000 people.

Their remoteness combined with early border closures made Pacific island nations among the last places in the world to be touched by the virus, with Tonga recording its first case in October. But some have experienced serious outbreaks this year, raising fears that their health systems could be overwhelmed. Travelers arriving from overseas often face stringent quarantine requirements.

“At the end of the day that’s what we’re talking about, extinction of languages, culture and of people’s lives, and why should we accept that?”

In the end, the summit was personally attended by the leaders of only three Pacific island nations: Fiji, Palau and Tuvalu.

“Definitely you felt that void,” Palau President Surangel Whipps, Jr. said in an interview on Tuesday.

Whipps said that before he left for Scotland he spoke with President David Kabua of the Marshall Islands, an atoll nation averaging seven feet above sea level that the World Bank said last month would be one of the first to face an existential threat from rising sea levels.

“I could feel in his voice when he was talking to me,” Whipps said. “He was saying, ‘I really ask you to represent us because this is our last chance.’”

In his speech at the COP26 World Leaders Summit on Nov. 2, Whipps emphasized the importance of keeping the average global temperature rise to 1.5 degrees Celsius by the end of this century. He also called on industrialized nations to greatly increase their climate funding commitments for developing nations, including funding for climate adaptation.

The resources of Palau, a nation of about 18,000 people, “are disappearing before our eyes,” he said.

“Frankly speaking, there is no dignity to a slow and painful death,” he said in his speech. “You might as well bomb our islands instead of making us suffer.”

Although some Pacific island nations have filled out their COP26 delegations with representatives from their missions in the United States and Europe, as a whole they have fewer high-level government officials and civil society representatives in Glasgow than at previous climate summits. Climate activists say that makes it more difficult to attend every meeting and pressure some of the world’s biggest emitters, including the U.S. and China.

“It’s good when there’s solidarity and everyone is there to lend that voice and of course engage and talk to leaders and get them motivated to make the right choice,” Whipps said.

A group of campaigners said Monday that the largest delegation at COP26 is the one representing the fossil fuel industry. An analysis by the group, led by international nongovernmental organization Global Witness, found that at least 503 industry lobbyists were on the provisional list of attendees. That is more than any single country, with Brazil coming closest at 479 delegates.

Sam Leon, head of major investigations at Global Witness, said many fossil fuel companies represented at COP26 have a history “of denying climate change in the first instance and subsequently pushing false solutions that simply derail or distract from the primary focus, which has to be cutting emissions quite radically.”

In the Pacific, many are watching the summit from afar.

Belyndar Rikimani and Atina Schutz, both climate activists studying law in Vanuatu, began planning their trip to Scotland months ago. But because they are not Vanuatu citizens — Rikimani is from the Solomon Islands, and Schutz is from the Marshall Islands —pandemic border restrictions would have prevented them from re-entering the country and continuing their studies after COP26.

Others in the region, they said, were unable to attend the summit because of border closures, the high cost of flights and accommodation, or lack of access to Covid-19 vaccines.

In Vanuatu, Rikimani said, the cost of a pre-departure Covid test alone was about 25,000 vatu ($225), which for some people is half a month’s salary.

“It was just too much for some of us to afford to get everything in order,” said Rikimani, 24, who is vice president of Pacific Islands Students Fighting Climate Change.

Though Rikimani and Schutz have participated in COP26 virtually along with three others from their group who are in Scotland, they have had to contend with technical glitches and vast time differences.

“Being virtually there is just not the same as being physically present and being able to talk to people,” said Schutz, 23, awareness chairperson of Pacific Islands Students Fighting Climate Change.

Changing weather patterns have also brought intense storms that homes were not built to withstand. And like their counterparts in Tuvalu, officials in Palau worry about the sinking of their islands, which have their own chiefs and sometimes their own language.

“If the island is gone, how can you still be a chief?” Whipps said. “At the end of the day that’s what we’re talking about, extinction of languages, culture and of people’s lives, and why should we accept that?”