Over 750 unmarked graves found near former Indigenous school in Canada 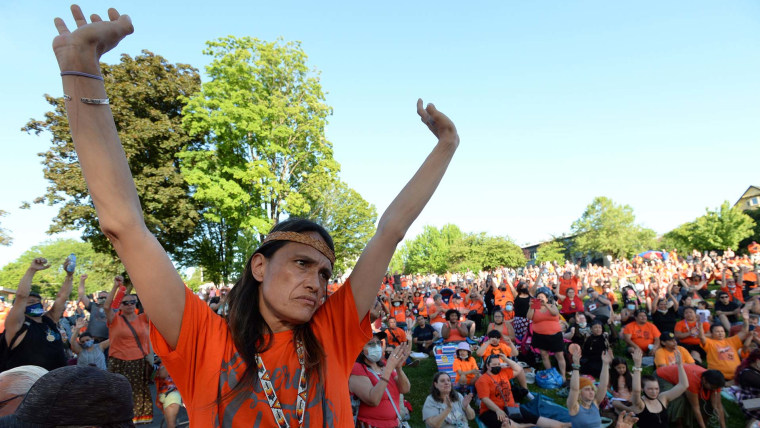 Hundreds of unmarked graves have been located near a former residential school for Indigenous children in Canada, an Indigenous group announced Thursday. The finding follows the discovery last month of human remains at a similar site — prompting a national reckoning of a shameful chapter in Canadian history.

A preliminary investigation by Cowessess First Nation, whose lands are located in the Saskatchewan province, led to an estimated 751 unmarked graves at a cemetery near the former Marieval Indian Residential School, Cowessess Chief Cadmus Delorme said at a virtual news conference. Radar scanning was used in the area as part of the investigation this month.

The school operated from 1899 to about 1996, and the nearby cemetery had been run by the Roman Catholic Church until Cowessess took it over in 1981, CTV News reported.

Delorme emphasized that the findings were of unmarked graves and not a mass gravesite. He said the Catholic Church first removed the cemetery’s headstones in the 1960s.

It is unclear how many of the remains detected belong to children, Delorme said, adding that “there are oral stories that there are adults in this gravesite as well.”

According to Canada’s Truth and Reconciliation Commission, which published a report that found the country’s residential school system amounted to cultural genocide, a cemetery was left on the Marieval site after the school building was demolished.

“We didn’t remove the headstones,” Delorme said. “Removing headstones is a crime in this country. We are treating this like a crime scene.”

The latest revelation comes a month after the remains of 215 children, some as young as 3, were found buried on the site of what was once Canada’s largest Indigenous residential school near Kamloops, British Columbia.

From the 19th century until the 1970s, more than 150,000 First Nations children were required to attend state-funded Christian schools as part of a program to assimilate them into Canadian society. They were forced to convert to Christianity and not allowed to speak their native languages. Many were beaten and verbally abused, and up to 6,000 are said to have died.

The Canadian government apologized in Parliament in 2008 and admitted that physical and sexual abuse in the schools was rampant. Many students recall being beaten for speaking their native languages; they also lost touch with their parents and customs.

Indigenous leaders have cited that legacy of abuse and isolation as the root cause of epidemic rates of alcoholism and drug addiction on reservations.

The discovery in Kamloops had dominated Canadian headlines in recent weeks and forced the country’s leaders to call for Canada to be “confronted with the truth” and investigate further.

“Sadly, this is not an exception or an isolated incident,” Prime Minister Justin Trudeau said earlier this month.

The United States also plans to investigate its own history involving the treatment and abuse of Native American children at boarding schools.

The unprecedented work will include compiling and reviewing records to identify past boarding schools, locate known and possible burial sites at or near those schools, and uncover the names and tribal affiliations of students, U.S. Interior Secretary Deb Haaland announced Tuesday.

“To address the intergenerational impact of Indian boarding schools and to promote spiritual and emotional healing in our communities, we must shed light on the unspoken traumas of the past no matter how hard it will be,” Haaland, a member of New Mexico’s Laguna Pueblo and the first Native American to serve as a Cabinet secretary, said.

Erik Ortiz is a staff writer for NBC News focusing on racial injustice and social inequality.