A Gaza mother struggled for 15 years to conceive her son. A missile killed him in an instant.

Home WORLD NEWS A Gaza mother struggled for 15 years to conceive her son. A missile killed him in an instant. 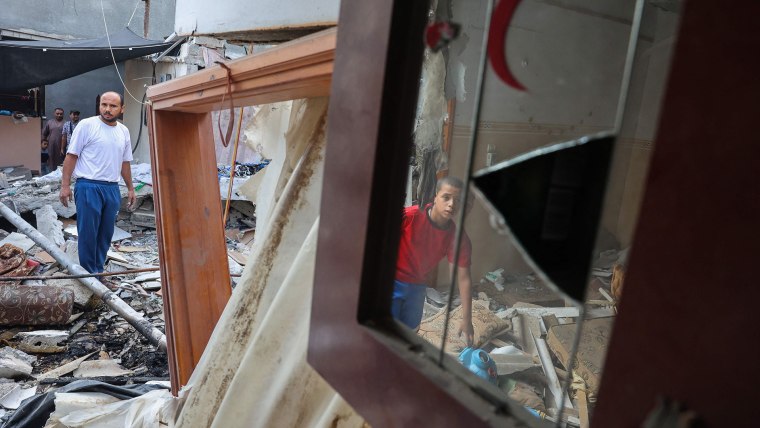 GAZA — It took five rounds of in vitro fertilization treatments for a Palestinian woman named Najwa Abu Hamadeh to conceive her only child.

It took just one missile to take her son away from her forever.

And as Israel and Palestinian militants agreed to an Egyptian-brokered cease-fire that has halted the latest outbreak of fighting in Gaza, she was mourning her boy, 18-year-old Khalil.

“Yesterday, my son and I were having dinner,” Hamadeh, 48, who lives in the crowded Jebaliya refugee camp in northern Gaza, told NBC News on Sunday. “He quickly went out of the house before we finished dinner” to join his friends.

Moment later, she said, “there was a strong bombardment” that shook her home.

Hamadeh said she threw on more clothes and raced out of her house, screaming for her son. She said she ran into a neighbor who was looking for her son Ahmed, also known as Hamada.

It took them just minutes to find where the missile struck Saturday — directly in front of the supermarket near their patched-together homes in this refugee camp not far from southern Israel.

“I found people out like (it was) the day of resurrection,” the grieving mom said, referring to a crowd that had gathered on the spot.

Amid the choking dust and wreckage, a desperate search for survivors was already underway.

It did not take her long to find the body of the child she had struggled for 15 years to conceive. “He is my only son,” she said, still speaking of Khalil in the present tense.

Khalil was one of five people killed on that spot.

Hamadeh said she had been preparing for her son to get married, eager to welcome his future bride and their children into the family’s home in the refugee camp. Now that future has been wiped away in one short burst of this conflict.

“The first thing I saw was the body of my son’s best friend,” Hamadeh told Al Jazeera. “That’s when I screamed and knew that my son might also have been killed. Minutes later, I found my son. He was soaked in his blood and lying on the ground. I was screaming so hard, calling for an ambulance.”

“I wanted him to graduate quickly so that I could find a bride for him,” she told the news network. “I have no one else but him. I can’t believe what happened and I don’t want to believe.”

Over three days, 46 Palestinians were killed, including 16 children and four women, with more than 300 wounded, according to the Palestinian Health Ministry.

Twelve of those killed were Palestinian Islamic Jihad militants, according to the armed faction.

Israel estimated a total of 47 Palestinians were killed, including 14 killed by misfired Palestinian Islamic Jihad rockets — numbers that could include Khalil.

The Israeli military said it carried out no operations in the area of the Jebaliya refugee camp at the time of the strike that killed Khalil. It released video footage that purportedly showed a barrage of rockets fired by militants, with one falling short.

The militant group had announced a rocket attack on the southern Israeli city of Ashkelon, just north of Jebaliya, around the same time as the explosion, according to The Associated Press.

Israel said Islamic Jihad fired 1,100 rockets toward it in total over the three days, with about 200 of them falling short in Gaza.

The militant group has not responded to Israel’s claims that some civilians were killed by the misfired rockets. It has held Israel responsible for all the deaths.

NBC News has not verified the claims of either side.

No Israelis were killed or seriously wounded in the fighting, which had briefly threatened to spiral into an all-out conflict.