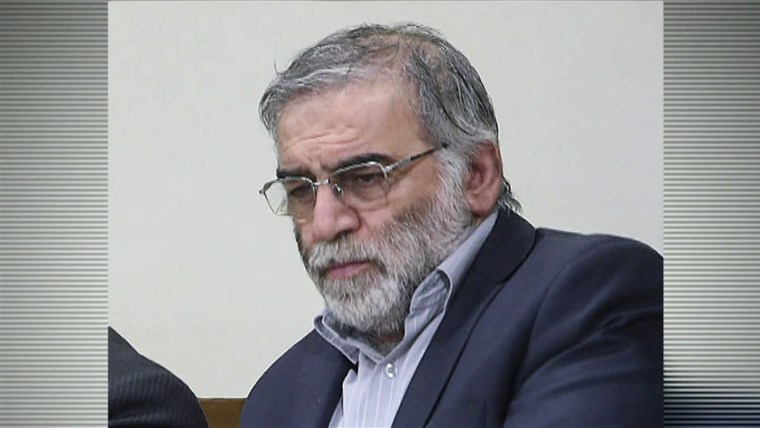 TEHRAN, Iran — A day after the dramatic assassination of the country’s leading nuclear scientist in a roadside attack, Iran’s supreme leader on Saturday vowed to retaliate and pledged to continue Iran’s nuclear work.

Ayatollah Ali Khamenei promised “definitive punishment” in a statement on his official website. Later on Twitter, he promised to pursue the “brutal mercenaries” behind the ambush and killing of scientist Mohsen Fakhrizadeh near Tehran on Friday.

Calling him a “martyr,” Khamenei praised Fakhrizadeh’s work and said he was one of the country’s “eminent scientists in the nuclear and defense fields.” He added that Iran would continue with the “scientific and technological efforts” in which he was engaged.

Fakhrizadeh was killed Friday in an attack on his car in the Absard area of the province of Damavand, about 40 miles east of Tehran, the capital, Iran’s Defense Ministry said.

He was widely regarded by the West as the architect of a covert military nuclear program by Tehran that was halted in 2003. Iran has consistently denied seeking to develop a nuclear weapon.

Iran’s clerical and military rulers, including President Hassan Rouhani, have pointed the finger of blame for Fakhrizadeh’s death at Israel, which could renew tensions in the Middle East and beyond.

“Our people are wiser than to fall in the trap of the Zionist regime (Israel). … Iran will surely respond to the martyrdom of our scientist at the proper time,” Rouhani said in a televised Cabinet meeting on Saturday.

A spokesman for Israel’s foreign ministry, considered Iran’s archenemy, told NBC News on Saturday that the country was “not commenting on security-related matters.”

The death of Fakhrizadeh could provoke confrontation between Iran and its foes in the last weeks of Donald Trump’s presidency. Trump withdrew the U.S. from a landmark nuclear agreement between Iran and world powers in 2018.

It could also complicate any efforts by President-elect Joe Biden to revive America’s relationship with Iran, once he takes office in January.

The U.S. State Department, White House and CIA have not responded to NBC News’ requests for comment, while a spokesperson for the Pentagon declined to comment on Friday. However, Trump retweeted a post on Friday from an Israeli journalist, Yossi Melman, about Fakhrizadeh’s killing.

In the West, Fakhrizadeh was commonly referred to as Iran’s Robert Oppenheimer, the American scientist who helped develop the atomic bomb in 1945, and was considered among the most important nuclear scientists in Iran.

Tehran has viewed the program of assassinations as an attempt to sabotage its nuclear energy program and has always denied pursuing nuclear weapons.

In January, frayed tensions between Washington and Tehran reached a boiling point after Trump ordered the assassination of one of Iran’s top military generals, Qassem Soleimani. He was killed when a U.S. drone targeted his motorcade in Baghdad on Jan. 3.

Iran retaliated less than a week later by firing missiles at American troops in Iraq.

Although most Iranians had not heard of Fakhrizadeh before Friday, his death will likely give rise to feelings of fear over a possible confrontation, Iranian Canadian academic Arash Azizi told NBC News, while the country also battles with one of the worst coronavirus outbreaks in the Middle East and a flagging economy.

Azizi, who has also authored a biography of Soleimani, said many people would be questioning what Trump may do in his remaining weeks in office and how Biden could overcome this latest foreign policy hurdle.

“I think Iran will be prudent in its response and wait for the new American administration,” he said. “The Iranian regime finds itself in a very hard place and it knows a serious confrontation can be lethal to it — it will try to avoid it.”

Elsewhere in the region, many in Israel consider Iran an existential threat. Prime Minister Benjamin Netanyahu has made a tough stance on Iran a top priority. In 2018, Netanyahu gave a presentation in which he unveiled what he described as material stolen by Israel from an Iranian nuclear archive and described Fakhrizadeh as a name to remember.

Former CIA Director John Brennan called the assassination “highly reckless” on Twitter. Warning that “it risks lethal retaliation and a new round of regional conflict,” as he urged Iran to “resist the urge to respond against perceived culprits.”

On Saturday, Iran’s envoy to the United Nations, Majid Takht Ravanchi, wrote a letter to Secretary-General Antonio Guterres and President of the U.N. Security Council Inga Rhonda King, stating that Iran reserved the right to defend itself.

He also claimed there were “serious indications of Israeli responsibility” for Fakhrizadeh’s death, the state-run Islamic Republic News Agency reported.

The office of the spokesperson for the U.N. secretary-general did not confirm to NBC News whether the letter had been received or responded to.

“We have noted the reports that an Iranian nuclear scientist has been assassinated near Tehran yesterday. We urge restraint and the need to avoid any actions that could lead to an escalation of tensions in the region,” Farhan Aziz Haq, deputy spokesman of the U.N. secretary-general, said by email on Saturday.

In Europe, a spokesperson for the European Union’s High Representative for Foreign Affairs and Security Policy Josep Borrell Fontelles called the killing a “criminal act” in a statement on Saturday and urged “all parties to remain calm and exercise maximum restraint.”

Ali Arouzi reported from Tehran and Adela Suliman from London.