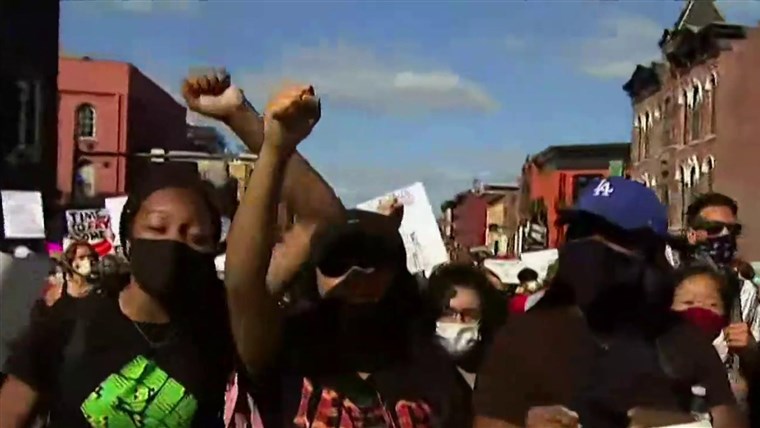 Belarus’ embattled president has a message for tens of thousands of protesters who continue to demand he step down: He’s not going anywhere.

Video shown on state news agency Belta showed a rifle-wielding President Alexander Lukashenko emerging from a helicopter after other unverified video shared on social media showed him hovering over huge protest crowds in the capital Minsk.No ammunition clip was visible in his weapon.

The strongman wearing body armor was show by Belta arriving by helicopter as the crowds approached the edges of his presidential residence grounds before dispersing peacefully.

A voiceover from Belta identified a teen, also in camouflage-style body armor and carrying a rifle, in Lukashenko’s entourage as the president’s 15-year-old son, Nikolai.

An estimated crowd of between 100,000 and 200,000 people attended the rally in Minsk as protests entered their third week after a contested election, which saw Lukashenko, 65, win by a landslide, although the opposition has called the vote rigged.

In the days following the disputed vote, violent clashes with police left thousands of people detained and dozens injured, fueling protests of the size and duration unprecedented for Belarus.

It’s not clear why Lukashenko made the show of force as there were no reports of protesters attempting to enter the presidential residence or its grounds.

A large contingent of security services and police vans were deployed to the rally in the capital, raising fears of a repeat crackdown, but there were no immediate reports of clashes or detentions.

Another video that emerged on social media on Sunday showed Lukashenko greeting riot police officers outside his residence. The president can be heard thanking the officers and calling them “beauties.” The riot police can be heard banging their shields in response. Some can be heard yelling out: “We are with you till the end.”

Belarusians have been protesting every day since the election on Aug. 9. Lukashenko has blamed foreign powers for conspiring to topple him.

He has been stoking fears of NATO forces aggregating on the country’s western border, a claim that the alliance denies.

Meanwhile, Belarusian opposition leader Svetlana Tsikhanouskaya, a political novice and runner-up to Lukashenko, is due to meet with Deputy Secretary of State Stephen Biegun in Lithuania on Monday.

Tsikhanouskaya fled to Lithuania after the election for security reasons.

She has declared herself the legitimate winner and told Polish newspaper Gazeta Wyborcza on Monday that she hoped a dialogue with the authorities will start soon, Reuters reported.

Lukashenko’s crackdown on protesters has caused international condemnation, with European leaders threatening sanctions and the U.S. calling the election “neither free nor fair.”