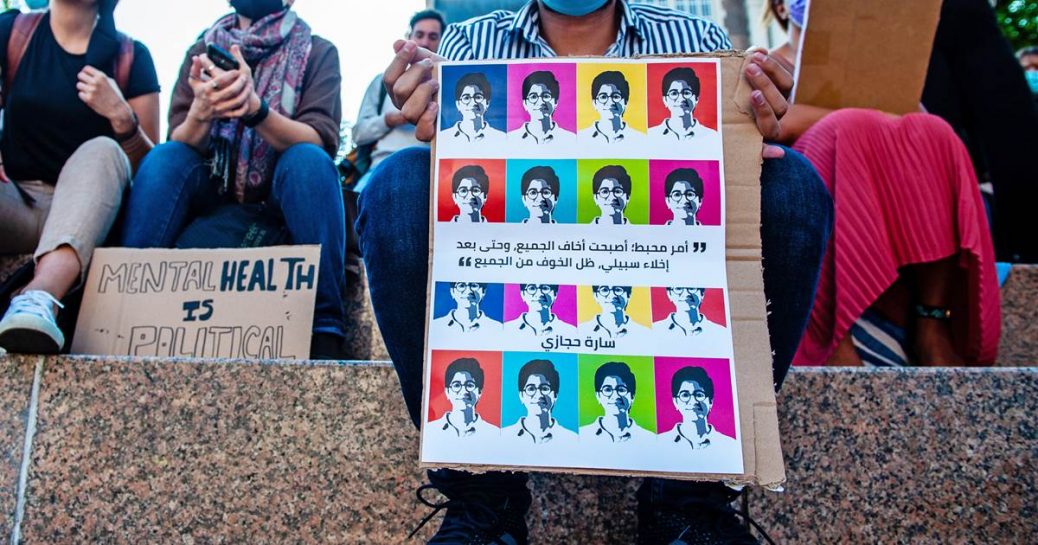 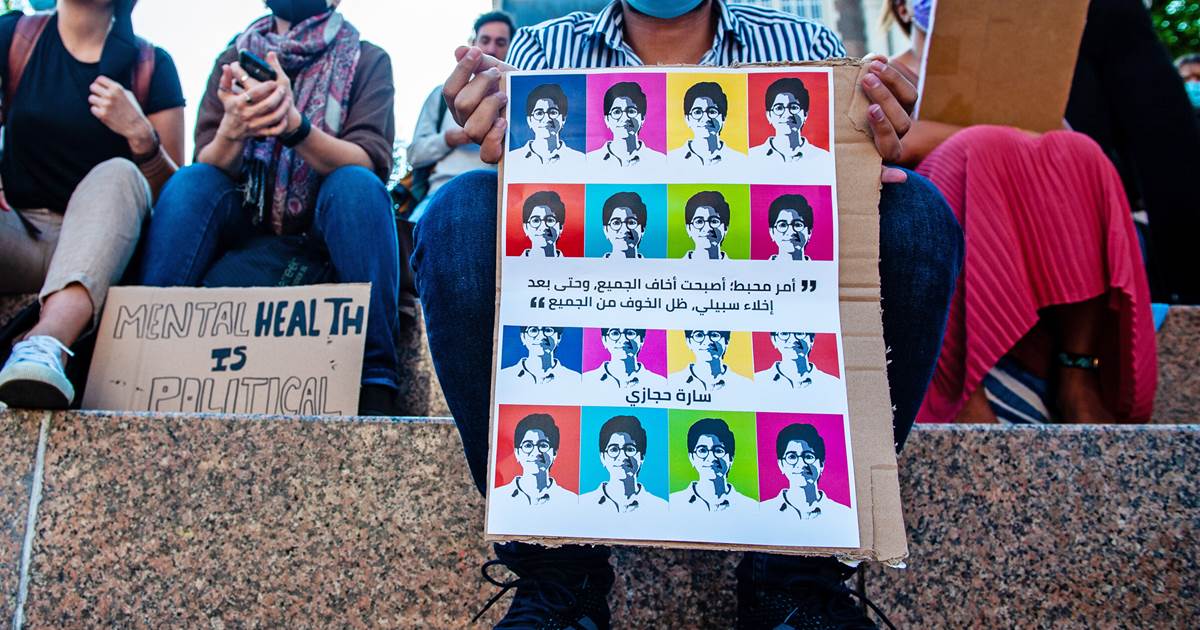 Malak el-Kashif, a political activist and transgender woman living in Egypt, was arrested at her Cairo home last March after participating in a protest and was then subjected to verbal and physical abuse at the hands of Egyptian authorities for months, according to Human Rights Watch. She says she was placed in solitary confinement at a men’s prison for 135 days, where she was refused medical treatment.

El-Kashif is one of 15 people who shared harrowing stories of abuse with Human Rights Watch for its recently published report “Egypt: Security Forces Abuse, Torture LGBT People.” The report’s main findings include arbitrary arrests of people thought to be LGBTQ; entrapment of gay and bisexual men through social networking and dating apps; and torture and prolonged detainment of sexual and gender minorities in state custody.

“Egyptian authorities seem to be competing for the worst record on rights violations against LGBT people in the region, while the international silence is appalling,” Rasha Younes, an LGBTQ rights researcher at Human Rights Watch, stated in the report. “Egypt has unabashedly continued to target and abuse LGBT people simply for who they are.”

‘I was prepared to end my life’

For its report, Human Rights Watch interviewed LGBTQ people who had been prosecuted between 2017 and 2020 under “debauchery” and “prostitution” laws, as well as two defense attorneys. Their accounts allege systemic abuse throughout the judicial system in Egypt, one of approximately 70 countries around the globe that criminalizes homosexuality — whether explicitly or just in practice.

Hossam Ahmed, a 27-year-old transgender man arrested in 2019 and released last month, was placed in a women’s prison where he was given an ID card that said “female” and denied his gender-affirming treatment, according to the report. He was allegedly forced to sleep on “a rotten and smelly mattress” and would sometimes go days without food.

Ahmed Alaa, 24, was arrested in 2017 by officers in civilian clothing who did not inform him of the reason for his arrest, according to the report. Alaa said he was verbally abused and threatened by officers who then put him in solitary confinement.

“I was prepared to end my life if they prolonged my detention,” he told Human Rights Watch.

A change in power

While LGBTQ people have long been subjected to homophobia and transphobia in Egypt, Younes said the situation worsened after its current president, Abdel-Fattah el-Sissi, took power in 2014.

“Before el-Sissi took power, they had some breathing room to at least exist in public without being attacked, arrested or harassed,” Younes said of sexual and gender minorities. “At the same time, LGBTQ rights activists have formed strong networks of resistance and solidarity that allowed them to protect each other from violence.”

A major turning point came in September 2017 following a concert in Cairo by Lebanese band Mashrou’ Leila, whose lead singer is openly gay. After several young people in the audience waved a rainbow flag during the weekend concert, public prosecutor Nabil Sadek ordered an investigation, which led to seven arrests the following Monday, according to The New York Times.

The incident was then followed by a crackdown in which police and state security agencies arrested over 100 suspected LGBTQ people over the following year using social media to entrap them, according to an NPR interview with Dalia Abdel Hameed, head of the gender program for the Egyptian Initiative for Personal Rights, a human rights organization.

Homosexuality is not explicitly a crime in Egypt, according to Paula Gerber, a human rights law professor at Monash University in Australia. Gerber said LGBTQ people are often arrested and charged with prostitution, a broadly written law criminalizing any activity that offends “religion,” “national unity” or “social peace.”

Even if legal charges against LGBTQ people are dismissed, merely being accused of an LGBTQ-related offense can cause individuals to be ostracized from their families, lose their social safety nets or be denied access to employment, medical care or legal protection, according to Younes.

Younes said Egyptian authorities actively monitor social media and city streets to crackdown on LGBTQ people and others who are protesting or organizing for civil rights, all of which are labeled as subversion or even terrorism.

Human Rights Watch said police will set up fake profiles masquerading as gay men on dating apps like Grindr and social media platforms such as Facebook and WhatsApp in an attempt to meet in public or learn the names and meeting places of other queer people for future raids and arrests. Officers will also look through arrested people’s phones with the same goal in mind.

As a result, LGBTQ people find it difficult to date, talk online or seek medical care, said Khalid, an Egyptian native and founder of No Hate Egypt, an online group that uses social media to educate Egyptians about the country’s LGBTQ issues and culture. Khalid asked that his real name not be used because of fear that Egyptian officials may try to track him and other members of his group online.

Fearing surveillance and monitoring, Khalid added, people are guarded with their names, personal photographs or identifying details online. Queer people will often talk for months online before agreeing to meet in public, because — in addition to police — they know that rapists, thieves and blackmailers also target gay men on the apps, knowing they won’t go to police if they’re attacked, according to Human Rights Watch.

Someone wanting to meet in public may get stood up by a reluctant partner several times before the partner finally feels safe enough to actually appear, Khalid said. LGBTQ Egyptians also fear obtaining medical care, such as tests for sexually transmitted illnesses, or will sometimes marry other queer people of the opposite gender, to avoid being outed and persecuted.

Khalid said the Egyptian government has long used anti-LGBTQ arrests to whip up support among Islamic conservatives while distracting citizens from poor living conditions and other civil rights abuses.

Increasingly, he said, Egyptian leaders are parroting “moral” and pseudoscientific rhetoric used by Christian conservatives in the West, accusing queer people of recruiting children and destroying humanity or claiming homosexuality as a disease or mental illness that harms the immune system and infects others.

“If there weren’t problems that warrants reporting, we won’t go looking for them,” Younes said. “Instead of working to remedy these systemic problems, Egypt claims that any criticism and call for accountability directed at its governance is a western imposition and threat to its internal order.”

Egypt, according to the report, has “repeatedly rejected recommendations by several countries to end arrests and discrimination based on sexual orientation and gender identity,” and at the United Nations Human Rights Council in March, Egyptian officials refused to recognize the existence of LGBTQ people.

Neither the Egyptian Embassy in Washington, D.C., nor its consulate general in Los Angeles responded to NBC News’ requests for comment.

A particular point of trauma for LGBTQ Egyptians around the world, Khalid said, is the June 2020 suicide of Sarah Hegazy, a once outspoken Egyptian queer feminist who was detained by el-Sissi’s National Security Agency in 2017 for raising a rainbow flag at the Mashrou’ Leila concert.

Hegazy said police molested her, tortured her with electric shocks and threw her into solitary confinement. After being fired from her job and rejected by her family, Hegazy fled to Canada, where she suffered PTSD and panic attacks which intensified amid the death of her mother soon after. She eventually took her own life, leaving a suicide note.

“The experience has been harsh and I’m too weak to resist. To the world, you’ve been greatly cruel, but I forgive,” Hegazy wrote in the note, which was published in part in The New York Times.

Khalid said queer Egyptians worldwide share a sense of shock and trauma around her story, knowing it can happen to themselves and their friends.

Younes said supporters of LGBTQ rights — whether private individuals or government officials — have a role to play in protecting lesbian, gay, bisexual, transgender and queer people in Egypt.

She encourages the international community to support, promote and empower Egyptian LGBTQ organizations by helping to provide funding and secure platforms where they can connect and organize. As for governmental support, Younes said nations around the world “have a moral and human obligation to hold Egypt accountable to its egregious abuses” in public and private forums.

“Egypt’s partners and those who provide assistance to its abusive security forces should halt their support instead of turn a blind eye,” she said, “so that LGBTQ people can trust that they can turn to their government for protection, not torture.”