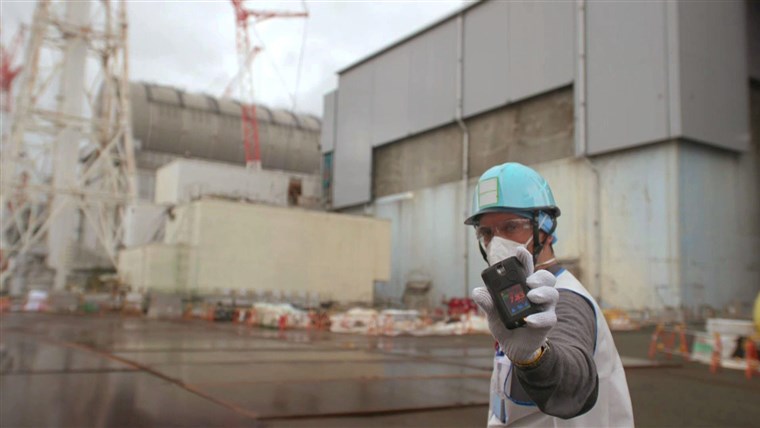 TOKYO — An earthquake, a tsunami and a nuclear disaster.

Japan on Thursday marked 10 years since a triple catastrophe crippled its northeastern region, killing thousands and leaving a trail of devastation that has left many survivors still struggling to piece their lives back together a decade on.

It set off a tsunami that swept far inland, destroying towns and causing meltdowns at the Fukushima Daiichi nuclear power plant.

More than 20,000 people are estimated to have died, mostly in the tsunami, and nearly half a million people were displaced as the region suffered the world’s worst nuclear disaster since Chernobyl.

Ten years later, many in Japan headed for the coast Thursday carrying bouquets or visited graves to pray, while others took part in anti-nuclear protests to mark the anniversary.

Japanese Emperor Naruhito and his wife took part in a somber memorial in Tokyo along with Prime Minister Yoshihide Suga, observing a moment of silence at 2:46 p.m. — the minute the shaking began.

“My heart aches” thinking of those who had lost their loved ones, jobs and communities, Naruhito said, noting that many Fukushima residents still cannot go back.

“I also consider it important to heal emotional scars and watch over the mental and physical health of those afflicted, including the elderly and children,” he told a scaled-back audience who were wearing masks due to the coronavirus pandemic.

Suga, dressed in a black suit, told the memorial that the loss of life was still impossible to contemplate.

The catastrophe has hung over Japanese life for 10 years since it made global headlines, and on Thursday support poured in from abroad.

The singer Lady Gaga, who has a large fan base in the country, voiced a message of solidarity.

“It seems like yesterday that I was watching the shocking footage of the devastating earthquake and tsunami on the news and thinking, ‘What can I do to help?'” she said in a video on Twitter.

Following the disaster, the singer contributed a song to the “Songs for Japan” charity album and $1.5 million to relief funds from the sales of a wristband on her website. She also performed at a benefit show for the Japanese Red Cross.

“Let’s all continue to support each other, be kind to each other and love each other,” she added, drawing comparisons with the ongoing Covid-19 pandemic.

Earthquakes are common in Japan, one of the world’s most seismically active areas. Last month, a magnitude 7.3 earthquake struck off the coast of the Fukushima prefecture, raising fears of a repeat crisis but causing little damage.

Some 40,000 people are still displaced by the disaster, unable to return home to areas near the wrecked plant that are still off-limits due to radioactive contamination.

The government has spent about $300 billion to rebuild the region, but safely decommissioning the plant will take decades and billions of dollars.

In a show of rebirth, Fukushima had been due to host parts of the Summer Olympics that were scheduled to take place in Japan in 2020.

However, the games were delayed to July due to the pandemic and have been hit by a sexism scandal. The resignation of Prime Minister Shinzo Abe due to ill health last August and worsening U.S.-China tensions have further clouded what was supposed to be a year of celebration for the country.

Thursday’s memorial comes two weeks before the Olympic torch run will begin from Fukushima. Suga said the Olympics will showcase Japan’s recovery from the disaster.