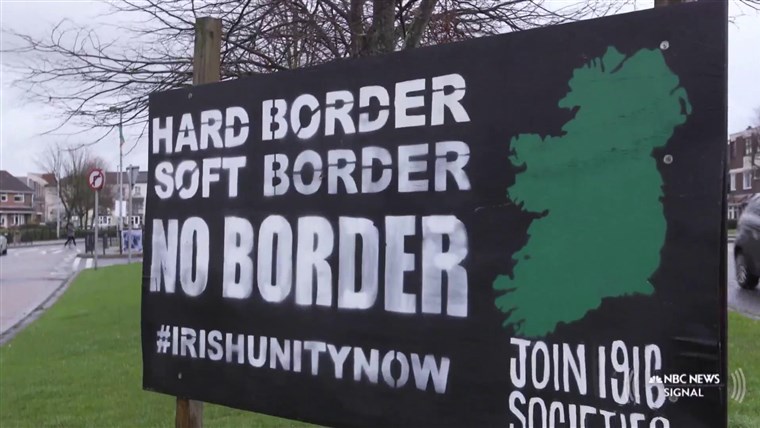 LONDON — The British government has for years hoped that President Donald Trump would give them the post-Brexit trade deal they crave.

But Democratic candidate Joe Biden made it clear Wednesday that he will not support any trade deal with London if it endangers peace in Northern Ireland — an issue that has dominated the United Kingdom’s messy, protracted departure from the European Union.

“We can’t allow the Good Friday Agreement that brought peace to Northern Ireland to become a casualty of Brexit,” Biden said in a tweet.

We can’t allow the Good Friday Agreement that brought peace to Northern Ireland to become a casualty of Brexit.

Any trade deal between the U.S. and U.K. must be contingent upon respect for the Agreement and preventing the return of a hard border. Period. https://t.co/Ecu9jPrcHL

The U.K. voted to leave the E.U. in 2016 and finally departed in January this year. It’s now just over three months away from the end of a year-long transition period, keeping most E.U. rules and regulations while it negotiates a new relationship with the 27-country political and economic club.

But the question about what to do about Northern Ireland, which is a part of the U.K., and its border with the Irish Republic, which is a separate country that will remain inside the E.U., remains unanswered.

Northern Ireland was the scene of a 30-year sectarian war between mostly Catholic “republicans” — who want to leave the U.K. and reunite with Ireland — and mostly Protestant “unionists” — who want to remain part of the U.K.

That conflict ended in 1998 with the Good Friday Agreement, a landmark peace deal that among other things, allowed the militarized Irish border to be erased. This was possible because both the U.K. and Ireland shared E.U. rules, so nothing crossing that boundary needed to be checked.

Brexit means that the U.K. and Ireland will no longer share these rules, so a new border would have to be erected between them.

Both scenarios risk a return to violence that has lain largely dormant for decades.

Biden isn’t the only Democrat worried that the Brexit plans of British Prime Minister Boris Johnson might upset this fragile balance.

On Wednesday, House Speaker Nancy Pelosi met U.K. Foreign Secretary Dominic Raab and emphasized the same message — any Brexit deal must not endanger the Good Friday Agreement, which she called “the bedrock of peace in Northern Ireland and a beacon of hope for peace-loving people throughout the whole world.”

Pelosi met Raab alongside House Ways and Means Chairman Richard Neal, D-Mass., who had earlier signed a letter urging Johnson to “abandon any and all legally questionable and unfair efforts” that might put the Northern Irish settlement in danger.

The issue has been a long-running concern particularly among the pro-Irish lobby in Congress. There are some 30 million Americans who say they have Irish heritage — of which Biden counts himself a proud member.

But there has been fresh alarm after Johnson announced plans for legislation that would allow him to break parts of the withdrawal agreement he signed with the E.U. last year. This move has caused uproar in Britain because it would effectively give ministers the power to bypass international law and disregard a key agreement Johnson had championed just months ago.

This is the “legally questionable” behavior mentioned in the representatives’ letter.

Johnson has attempted to quell anger among lawmakers by saying they can have a vote before he uses any of the contentious powers it would give him.

This does nothing to dispel the mounting opposition in Washington, which calls into question a central pillar of the Brexiteers’ argument.

They have said that a new U.S.-U.K. trade deal would be a central benefit of leaving the E.U.

Unless the seemingly intractable Northern Irish question is addressed, U.S. lawmakers are making clear they will block this from happening.