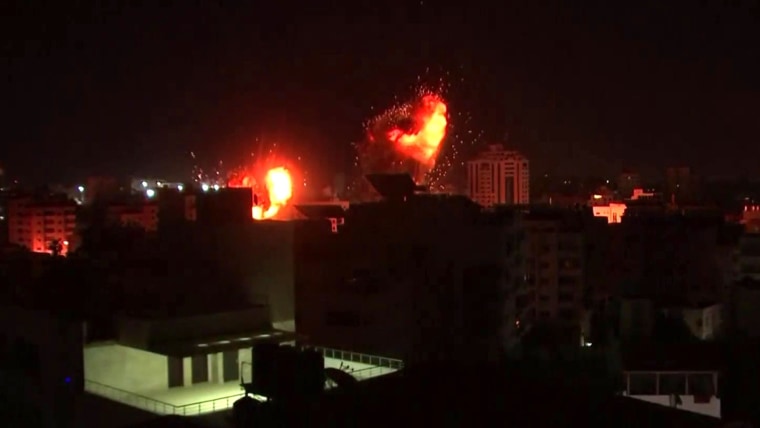 JERUSALEM — In his most emphatic statement since the latest Mideast violence began, President Joe Biden told his Israeli counterpart, Benjamin Netanyahu, on Wednesday that he expects a “significant de-escalation” of violence between Israel and Palestinian militants “on the path to a cease-fire,” the White House said.

Israel and Hamas, the Palestinian militant group that governs the Gaza Strip, have been exchanging airstrikes and rocket attacks for more than a week. At least 219 Palestinians and 12 Israelis have been killed.

Biden and Netanyahu spoke by phone and “had a detailed discussion on the state of events in Gaza, Israel’s progress in degrading the capabilities of Hamas and other terrorist elements, and ongoing diplomatic efforts by regional governments and the United States,” the White House said in a statement.

“The president conveyed to the prime minister that he expected a significant de-escalation today on the path to a ceasefire,” it added.

However, in a statement after the call, Netanyahu said that he was “determined to continue this operation until its objective is achieved: to restore quiet and security to you, citizens of Israel.”

At least 227 Palestinians including 64 children have been killed in the Israeli strikes since last Monday, according to the Gaza Ministry of Health.

Hamas, which is labeled a terror group by Israel and the U.S., launched more rockets into Israel, firing around 50 more in the past 24 hours and bringing the total to around 4,000 rockets in the past week, according to the Israeli military.

Around 90 percent of these are intercepted by Israel’s Iron Dome missile defense system, the Israeli military said. The rockets that have gotten through have killed 12 Israelis including two children, and have lit up the skies of cities such as Tel Aviv and sent residents fleeing to underground bomb shelters.

Meanwhile, four rockets were fired from neighboring Lebanon into Israel on Wednesday, the Israeli military said, the third time this has happened during the past two weeks. One rocket was intercepted, one struck open ground and the other two landed in the sea.

In response, the Israel Defense Forces shot artillery fire at a number of targets inside Lebanon, it said. A similar exchange of fire happened Monday.

The latest exchanges of fire come off the back of protests by Palestinians in the occupied West Bank and Jerusalem on Tuesday against Israel’s bombardment of the Gaza Strip. The demonstrators held a general strike amid clashes with Israeli security forces.

Clashes between Palestinians and Israeli soldiers broke out in Ramallah, a city in the West Bank. Support for Hamas isn’t unanimous here — but some see this as an opportunity to pressure Israel on longer-running issues over Palestinian territory and equal rights.

These historical tensions reignited on May 7 when Israeli police raided Jerusalem’s Al-Aqsa Mosque compound while Palestinian worshippers were praying there during Ramadan, the Muslim holy month. Hamas responded by firing rockets into Israel, which has replied with its own bombing campaign.

A way out of the violence remains elusive.

On Wednesday, the French, Egyptian and Jordanian governments called on all sides to agree to a cease-fire and pledged to work through the United Nations Security Council to achieve this.

“The three leaders emphasized the urgency of addressing the root causes of the Israeli-Palestinian conflict by resuming effective negotiations to achieve a just and lasting peace,” the countries said in a joint statement.

“The three leaders emphasized that the resolution of the Israeli-Palestinian conflict on the basis of the two-state solution remains indispensable for a comprehensive peace in the region.”

The U.S. has repeatedly blocked a statement by the Security Council that called for an end to “the crisis related to Gaza” and for the protection of civilians.

“Our goal is to get to the end of this conflict. We are going to evaluate day by day what the right approach is. It continues to be that quiet, intensive behind-the-scenes discussions are tactically our approach at this time,” White House press secretary Jen Psaki told reporters Tuesday.

Biden has so far resisted pressure, much of it from within his own Democratic Party, to criticize Israel’s actions. The U.S. gives Israel $3.8 billion a year in military aid, equivalent to 20 percent of Israel’s defense budget and nearly three-fifths of U.S. foreign military financing globally.

Netanyahu reiterated in a post on Twitter on Tuesday that Israel’s attacks “will continue for as long as it takes to restore calm” for all of its citizens.

Some 52,000 of Gaza’s 2 million people have been displaced as more than 400 buildings, including homes, hospitals and schools, have been damaged or destroyed, according to U.N. agency officials on the ground.

Gaza, already impoverished and struggling to cope with the Covid-19 pandemic, has had its two primary health care centers “annihilated” by strikes over the past few days, Dr. Medhat Abbas, head of international cooperation at the Palestinian Ministry of Health, said in an interview.

“The situation now is if the numbers of casualties continue to mount with the same rate, I assure you that the health system will collapse in the coming few days,” he added, “There’ll be no room to treat any more victims of this aggression.”

On the other side of the fence, in the Israeli city of Ashkelon near the Gaza border, Dr. Nomy Levin described having to treat all of her patients in an underground shelter during Hamas’ barrage.

“This is the best way to feel like safe during all the bombs,” said Dr. Levin, who works at the Barzilai Medical Center. “They are all connected to machines, so if we hear an alarm or bombs then we cannot disconnect them. So they need to just sit and pray.”