Britain’s daily Covid death toll is one of the worst in the world. What went wrong?

Home WORLD NEWS Britain’s daily Covid death toll is one of the worst in the world. What went wrong? 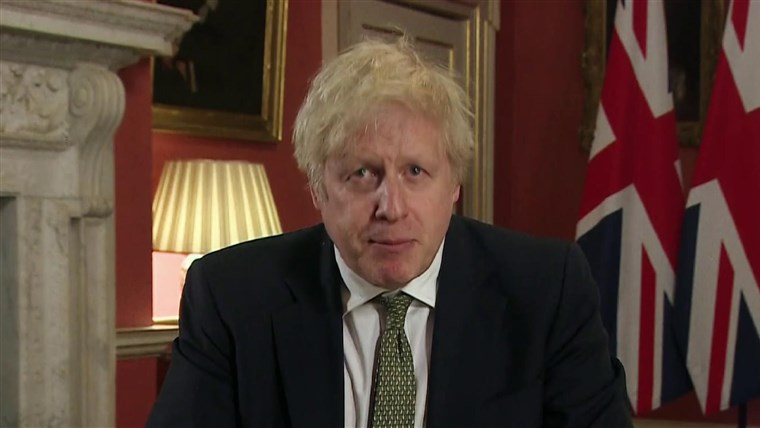 LONDON — The United Kingdom is one of the coronavirus death capitals of the world.

On Wednesday, the country saw its number of recorded Covid-19 fatalities rise by 1,820, and on Thursday by 1,290 again. In total that’s twice as many lives lost as in the sinking of RMS Titanic, comparable to ten Boeing 777s crashing all at once.

And until Thursday the U.K. had the highest per-capita daily death toll of any other country in the world — around twice that of the United States — according to rolling analysis by Oxford University.

Its daily per-capita deaths are currently second only to Portugal, but in terms of major powers right now the U.K. is an outlier, boasting as it does the world’s fifth-largest economy and vast, publicly funded National Health Service.

So what went so wrong? In trying to explain the unfolding daily tragedy, Prime Minister Boris Johnson is quick to point to a new, highly transmissible variant of the virus that appears to have originated in southeast England.

But plenty of experts say that, while Johnson may have been dealt a bad hand, he has played it poorly. For them, the key misstep was the decision to allow tens of millions of people to travel and mix on Christmas Day — while knowing the new variant was rampant.

“We shouldn’t have allowed the cases to continue rising up as we approached Christmas,” Nicola Stonehouse, a professor in molecular virology at the University of Leeds, said. “And then allowing people to mix at Christmas was just… just madness really,” she added, pausing to find the right words to describe that policy decision.

In November, Johnson told people in England that up to three families would be able to mix for five days over the festive period. (Scotland, Wales and Northern Ireland have powers over their own health systems and took similar measures at the time.)

When the new variant emerged, he scaled back his planned Christmas relaxation, ordering 18 million people in the hot spots of London and the southeast to stay at home.

However, most of the country were still allowed to travel and mix indoors on Christmas Day itself. It’s a decision some experts say is now bearing its grim fruit, as many warned it would beforehand.

Danny Altmann, a professor of immunology at Imperial College London, says questions over government policy and existing frailties in the NHS were already stress-testing Britain’s pandemic response to the limit.

The new variant “takes a system that’s almost broken and blows it to bits,” he said.

Today more than 93,000 people in Britain have died with Covid-19. Its NHS is buckling, with ambulances stacking outside hospitals and some cancer surgeries canceled.

Christmas wasn’t an aberration. It capped a year that saw Johnson accused of being too slow to introduce restrictions, failing to build an adequate “test, track and trace” network, and eroding public trust by refusing to fire his top adviser who appeared to break lockdown rules.

There is a frustration at what some see as the government’s attempts to shift blame onto the tiny minority who break the rules, rather than tightening up their own policies. These detractors see a trend: a prime minister who repeatedly waves away experts who are telling him to take swift action, only to cave in weeks later, by which time the numbers are much worse.

Supporters of the prime minister flip that equation on its head.

While others have been urging Johnson to go further with his coronavirus restrictions, some allies are surprised he’s imposed them as far as he has, given his longstanding ideological beliefs.

“Boris without doubt has been a life-long libertarian who wants to stay out of people’s business as much as possible,” said Guto Harri, Johnson’s spokesman when he was mayor of London between 2008 and 2016.

Harri says he’s seen a marked shift in his former boss, perhaps shaped by Johnson’s personal brush with the virus back in April that put him in intensive care and almost killed him. Whereas Johnson may have been hesitant to lock the country down last March, Harri believes that since then he’s struck by the prime minister’s willingness “to impose deep, deep restrictions on people’s way of life.”

On Wednesday Johnson called the spiraling daily death toll “appalling” and warned “there will be tough weeks to come.”

It isn’t all bad news. The U.K. vaccinates people faster than most other major economies. It has given the shots to 8 percent of its population, behind only Israel, the United Arab Emirates and Bahrain, according to Oxford University. The U.S. is at around 5 percent.

The British government is also keen to stress that this is not a national crisis but a global one, with many other countries struggling even without having the misfortune of spawning a new mutant strain.

Indeed, the Centers for Disease Control has warned by March the British variant could become the dominant strain circulating in the U.S. too, leading to further outbreaks.

However, experts like Stonehouse are eager not to let the government off the hook.

“We can’t blame the new variant for all this,” she said. “The new variant makes it worse, and it gets a lot of blame. But the problem was it came into the population at a time when there was a lot of mixing between people, and that’s what gave it the perfect breeding ground.”

She added, “I do think we would be in this situation, or a very similar situation, without the new variant.”