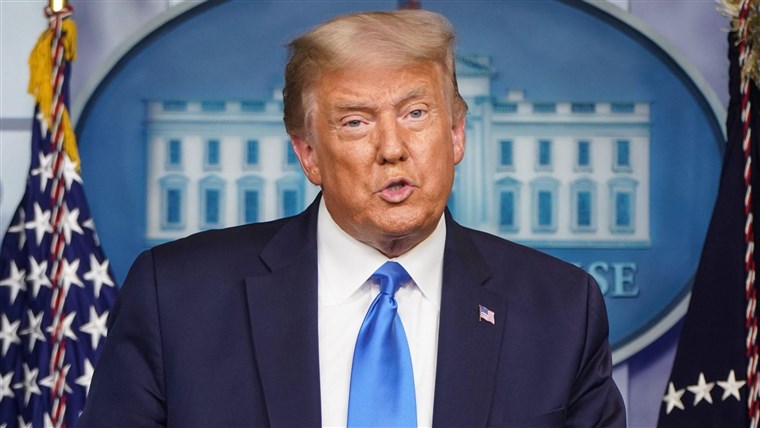 LONDON — President Donald Trump took a swipe at Meghan, Duchess of Sussex, on Wednesday after comments she made urging fellow Americans to vote in the upcoming presidential elections.

“I’m not a fan of hers and I would say this, and she probably has heard that, but I wish a lot of luck to Harry — he’s going to need it,” Trump said at a White House news briefing.

The president’s comments follow a video made by Meghan and her husband, Britain’s Prince Harry, in which she said that every four years elections are stressed to be the “most important election of our lifetime.”

The couple’s video urged Americans to vote and to be mindful of the negative tone of online debates and to seek decency and “build communities of compassion.”

While the Duke and Duchess of Sussex advocated for Americans to vote, neither explicitly named nor endorsed Trump or Democratic presidential nominee Joe Biden, but some have interpreted their comments as being critical of Trump.

“As we approach this November, it’s vital that we reject hate speech, misinformation and online negativity,” Harry, who now lives in California with his wife, said. He also said he has not voted his “entire life,” in line with royal protocols of political neutrality.

British tabloid front pages were filled with images of the royal couple Thursday, as Buckingham Palace appeared to distance itself from their comments, telling the British press the pair were no longer working royals and that Harry was speaking in a “personal capacity.”

In the past, Harry’s grandmother, Queen Elizabeth II, has encouraged people to exercise their right to vote in Britain.

Harry and Meghan caused a stir when they abruptly bowed out of royal duties in January, announcing they would “step back” as senior members of the royal family, with plans to split their time between North America and Britain.

When Harry married the former actress in May 2018, their wedding was heralded as a blast of glamour and modernity into the British monarchy, and helped to make them one of the world’s biggest celebrity couples.

Although their January announcement was a surprise, it was no secret that the couple felt the strain of the constant barrage of media attention and endless negative headlines.

Even so, the couple’s struggles with the media have followed them across the Atlantic. In July, they filed an invasion of privacy suit against unnamed paparazzi, accusing photographers of taking drastic measures to get images of them and their young son, Archie, at their California home.