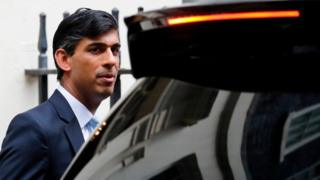 The new measures are expected to replace the furlough scheme, which is set to expire next month.

In July, around five million workers were still receiving some or all of their income through the scheme, many in the hospitality sector.

Pubs and restaurants have warned they will be hit hard by new restrictions.

From Thursday, hospitality venues in England will have to shut at 22:00 BST as the government tries to control the spread of the coronavirus.

Scotland is introducing similar measures, with pubs and restaurants having to close at 22:00 BST from Friday, while in Wales restrictions are limited to stopping alcohol sales at 22:00 from Thursday.

“Lots of businesses will not survive this and we are going to see more and more people lose their jobs,” said Kate Nicholls, chief executive of trade body UKHospitality.

At around 11:45, the chancellor is expected to address the Commons to unveil plans that the government hopes will stem those job losses.

The Treasury said the chancellor had been “preparing contingency plans over the summer in case the pandemic required it”.

It is understood Mr Sunak has been considering different forms of wage subsidy and will announce more financial help.

He is also thought to be looking at options including a salary top-up scheme, similar to those already operating in France and Germany.

The prime minister said Mr Sunak was working on “creative and imaginative” solutions.

Although the Treasury has declined to comment, possible ideas are thought to include allowing firms to reduce employees’ hours while keeping them in a job, with the government paying part of the lost wages.

Mr Sunak also announced on Wednesday that the Autumn Budget would be scrapped this year because of the pandemic.

Paul Johnson, director of the Institute for Fiscal Studies think tank, said he expected a “big rise” in unemployment when the existing furlough scheme expires at the end of next month.

“We’ve already seen something like a reduction of nearly three quarters of a million… in terms of the number of people on payroll and then we’ve got at least another two million or so on furlough not working,” Mr Johnson told the BBC’s Today programme.

“Some of those will likely be supported by this new scheme but not all of them and that implies, I suspect, by the end of the year that we will have something like… two million fewer than we had at the beginning of the year, although oddly that doesn’t seem to be translating at the moment into the official unemployment figures.”

Cancelling the Budget is a big deal, because of what it shows about the big picture: a government still in crisis mode, having to put off medium-term tough decisions, on tax rises, that would have at least been signalled in the contents of a Budget Red Box.

But we will get more spending, more support for jobs. As the chancellor told me last week, that does not mean extending the furlough scheme endlessly, but he has been thinking “creatively”.

The discussions with business groups and unions have centred around supporting employers with cash flow constraints to keep viable jobs. The furlough scheme’s initial purpose was to support people’s wages, expressly for them to stay at home.

The new scheme is likely to take inspiration from continental Europe, by subsidising “short time” work, that is to say, helping top up pay for workers given fewer hours of work in the crisis.

The furlough scheme is regularly lauded by the prime minister, and has undoubtedly been one of the most competently executed policy responses of the Covid crisis. Throw in the fact that the Tory “red wall” is more comfortable with use of state spending, and some Tory thinkers advocate a permanent scheme of wage support, such as occurs in Germany.

We also expect extensions by weeks or months of the various loan guarantee schemes offered by the Treasury. Already banks are fretting about having to call in some of these loans. Now significant swathes of the economy remain under the shadow of the pandemic and of ongoing social restrictions meant to defeat it.

It is difficult to see how a full Spending Review over four years could occur. The Treasury can not calculate the size of the pie to be sliced up. Having a one year review, like last year, also avoids some corrosive internal politics over winners and losers.

So more spending, and more jobs support, as infection rates rise, and restrictions look likely to be strengthened rather than loosened, but not yet accounting for how it is all to be paid for, at a time of high and rising public borrowing.

The government has been under mounting pressure to extend or replace the furlough scheme, which will wind down next month.

The Coronavirus Job Retention Scheme was introduced in March and paid 80% of the wages of workers placed on leave, up to a maximum of £2,500 a month.

Since then, employers have been asked to pay 10% of the wages of those on furlough, plus their National Insurance and pension contributions.

Furloughed workers can also now return to work part-time with the government paying for any remaining hours not worked.

During the weekly Prime Minister’s Questions on Wednesday, Boris Johnson faced calls from MPs from all sides to act quickly to help those businesses hit hardest by the new restrictions on economic and leisure activity.

Citing Whitbread’s announcement that it planned to cut up to 6,000 jobs in the UK, Labour leader Sir Keir Starmer said the threat to employment was “not theoretical”.

“The CBI, the TUC, the Federation of Small Business, the British Chamber of Commerce and the Governor of the Bank of England are all calling on the PM to stop and rethink and don’t withdraw furlough,” he said.

In a televised response to Tuesday’s prime ministerial broadcast, Sir Keir called for a “Plan B” for the economy – “because it makes no sense to bring in new restrictions at the same time as phasing out support for jobs and businesses.”

What are the possible options?

Are you currently on furlough? What would the new scheme mean for you? Have you got any questions about it? Share your experiences by emailing haveyoursay@bbc.co.uk.

Please include a contact number if you are willing to speak to a BBC journalist. You can also get in touch in the following ways:

If you are reading this page and can’t see the form you will need to visit the mobile version of the BBC website to submit your question or comment or you can email us at HaveYourSay@bbc.co.uk. Please include your name, age and location with any submission.