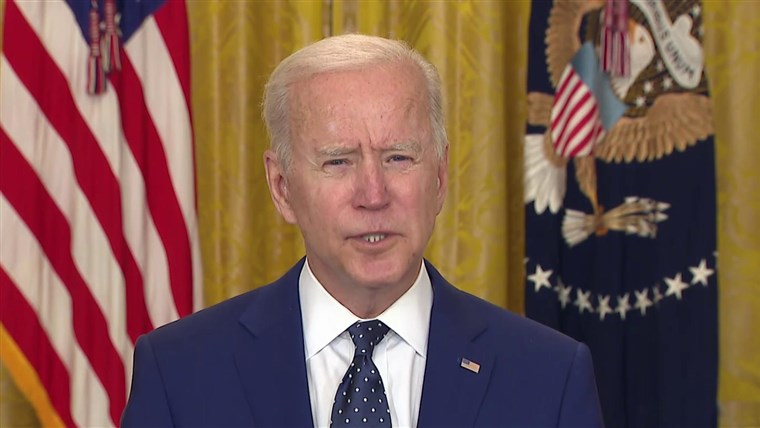 President Joe Biden called for a de-escalation in tensions with Russia on Thursday after hitting the country with fresh sanctions and proposed a meeting with Russian President Vladimir Putin this summer.

“The United States is not looking to kick off a cycle of escalation and conflict with Russia. We want a stable, predictable relationship,” Biden said. “If Russia continues to interfere with our democracy. I’m prepared to take further actions to respond. It is my responsibility as president of the United States to do so.”

Biden said he had a “candid” and “respectful” conversation with Putin earlier this week when he told his counterpart that he would be retaliating for interference in the 2020 presidential election and a sweeping cyberattack against American government. During the conversation, Biden said he proposed a summit in Europe between him and Putin and that aides from the two countries were discussing plans.

“Now is the time to de-escalate. The way forward is through thoughtful dialogue and diplomatic process,” Biden said. “The U.S. is prepared to continue constructively to move through that process. My bottom line is this: where there’s an interest in the United States to work with Russia, we should.”

Biden signed an executive order Thursday morning to strengthen his administration’s response to Russia, the White House said. Under the order, the Treasury Department has blacklisted six Russian technology companies that provide support to the cyber program run by Russia’s intelligence services.

Treasury also sanctioned 32 entities and individuals for “carrying out Russian government-directed attempts to influence the 2020 U.S. presidential election, and other acts of disinformation and interference,” as well as eight individuals and entities associated with Russia’s actions in Crimea.

In a call with reporters Thursday morning, a senior administration official said the U.S.’s response was intended to be “resolute but proportionate” to Russia’s actions, while emphasizing that the U.S. wanted to avoid an “escalatory relationship.”

The official added that elements of the U.S.’s response would “remain unseen.”

One of the Russians listed is Konstantin Kilimnik, a former employee of Trump campaign chairman Paul Manafort whom U.S. officials have identified as a Russian intelligence agent. The Treasury Department said Thursday that Kilimnik provided Russian intelligence services “with sensitive information on polling and campaign strategy” during the U.S. presidential election in 2016 and “sought to promote the narrative that Ukraine, not Russia, had interfered in the 2016 U.S. presidential election.”

The Biden administration is also expelling 10 personnel from the Russian embassy in Washington, D.C., including members of Russian intelligence services.

As part of its actions, the administration is “responding to reports that Russia encouraged Taliban attacks against U.S. and coalition personnel in Afghanistan,” which “is being handled through diplomatic, military, and intelligence channels” due to sensitivity of the matter and safety of forces, the White House said.

The administration official said that U.S. intelligence agencies had “low to moderate confidence” in reports that Russia offered to pay bounties for dead American troops in part because the intelligence “relies on detainee reporting and due to the challenging operating environment in Afghanistan.”

The U.S. also formally named Russia’s Foreign Intelligence Service as the perpetrator of the SolarWinds cyberattack last year, a widespread breach that tore into U.S. government agencies and dozens of corporations.

A spokesperson for Russia’s Ministry of Foreign Affairs vowed a “strong rebuff” in response to “such aggressive actions” and said U.S. ambassador John Sullivan had been called to the ministry.

“The response to the sanctions will be inescapable.” the spokesperson, Maria Zakharova, said.” Washington must realize that they will have to pay for the degradation of bilateral relations. The responsibility for what is happening lies entirely with the United States of America.”

The news of the sanctions was first reported by Bloomberg.

National security adviser Jake Sullivan told reporters outside the White House that Biden informed Russian President Vladimir Putin in their call earlier this week that the U.S. would be imposing the new sanctions.

Biden told Putin that he “made a determination” that Russia took the various harmful actions outlined Thursday and told him he would respond, but not escalate tensions, Sullivan said. Biden also told Putin that he wanted to find a stable and predictable way forward in their relationship and proposed a summit meeting this summer to that end.

Thursday’s sanctions come a month after Biden publicly promised retaliation against Putin for a range of malicious activities that Washington blames on Moscow.

Biden has characterized Putin as a “killer” and said he would “pay the price” for these actions. Russia denies all of these charges, saying the intelligence community’s documentation of its 2020 election interference consisted of “baseless accusations.”

Kremlin spokesman Dmitry Peskov suggested Moscow would respond in kind to any “illegal” sanctions imposed by the U.S.

“We condemn any intentions to impose sanctions, consider them illegal, and in any case the principle of reciprocity operates in this area,” he said Thursday according to Reuters. Russia did not want relations with Washington to be a case of “one step forward and two steps back,” he added.

U.S. officials also blame Russian intelligence services for the SolarWinds cyberattack, which Microsoft President Brad Smith described as “the largest and most sophisticated attack the world has ever seen.”

The National Security Agency, FBI, and the Department of Homeland Security’s Cybersecurity and Infrastructure Agency published an advisory Thursday accusing Russia’s Foreign Intelligence Service of ongoing hacking campaigns and offering technical advice on how to block them.

The administration’s actions mark the first time the U.S. government formally named the Russian agency as responsible for hacking widely used software made by SolarWinds, a Texas-based company, leading to the infiltration of at least nine federal agencies and dozens of companies. Federal cybersecurity staff are still working to clear the hackers from the agencies’ networks.

In January, White House press secretary Jen Psaki said the Biden administration had asked intelligence services for a full assessment of the hack and the 2020 election interference, as well as Russia’s use of “chemical weapons against opposition leader Alexei Navalny, and the alleged bounties on U.S. soldiers in Afghanistan.”

The Biden admin unveiled its first round of sanctions on Moscow for the poisoning and detention of Navalny early last month, in action coordinated with the European Union.

The sanctions expected Thursday come at a time of particular tension after Russia started amassing forces along the border with Ukraine. The Kremlin said the forces are there for a training mission, but few outside the country buy that, and the U.S. and its European allies have called on Russia to withdraw.

In his call with Putin on Tuesday, Biden proposed the summit to tackle issues including the situation around Ukraine.

Analysts say a Russian military offensive is not impossible, but many believe it’s more likely an attempt to intimidate Ukraine and a warning to the U.S. and its other Western backers not to get involved in an area it considers its backyard.