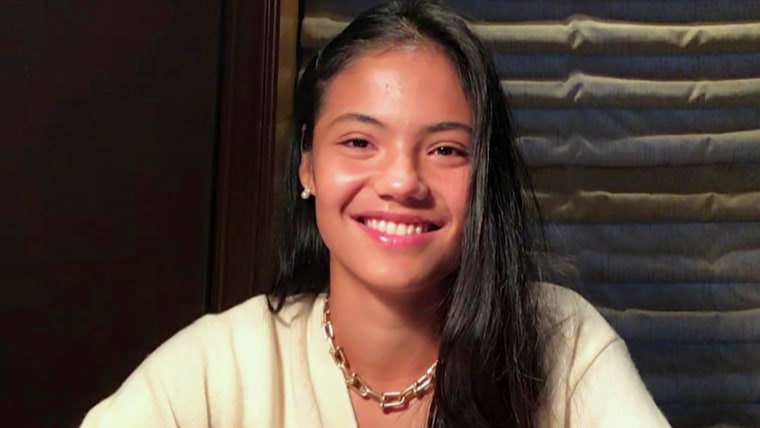 LONDON — Jubilation from ecstatic Britons started rolling in the moment Emma Raducanu dropped her racket in victory after beating Canada’s Leylah Fernandez at the U.S. Open over the weekend.

Queen Elizabeth II, fellow sports stars and politicians joined the chorus of congratulations when Raducanu, 18, on Saturday became the first British woman to win the U.S. Open since 1968.

Her fairy tale has already been repeated countless times.

How, in a matter of months, she went from graduating high school, where she won top grades, to becoming the first qualifier to reach a Grand Slam final in the professional era. And how she was born in Toronto to a Romanian father and a Chinese mother, moved to the United Kingdom at the age of 2, and started playing tennis when she was 5.

But it hasn’t been a total love-in, and her win has highlighted the complicated relationship that Britain has with diversity and immigration. Raducanu herself points to her global upbringing and background on Twitter and Instagram, where her bio doesn’t mention tennis and instead reads “london | toronto | bucharest | shenyang.”

“We embrace and celebrate our diversity. And if you work hard, and get a helping hand, you can achieve anything,” he wrote on the social media platform.

The adulation came from all corners of the political spectrum.

Right wing and anti-immigrant politician Nigel Farage was quickly criticized after he tweeted that she was a “global megastar” and said her win was “truly incredible.” Farage has made a career warning about immigrants, particularly those from Romania, coming to the U.K.

Before the U.K.’s departure from the European Union and shortly before a change in the rules allowed Bulgarian and Romanian citizens to live and work in Britain, a YouGov poll showed that the British were more concerned than their French or German counterparts about an influx of immigrants.

It’s a sentiment that Jonathan Eyal, international director at the Royal United Services Institute, a British defense and security think tank, mocked in a post on Twitter after Raducanu’s win.

“All these Romanian and Chinese migrants coming over here, taking our jobs,” he tweeted.

British diversity often runs up against discrimination and racist abuse in real life and on social media.

More recently, after the Euro final in July, three Black players who missed their penalty kicks were subjected to a torrent of racist abuse on social media. That then led to an outpouring of support for the players on social media and in real life.

Raducanu’s background has some immigrants to Britain, like Cambridge City Councilor Alexandra Bulat, not only celebrating her success, but also cautioning others that they shouldn’t get too hung up on it.

“People of migrant background do not need massive success stories to be able to be accepted and have rights in the U.K.,” Bulat, who moved from Romania to the U.K. nine years ago, said in an email. “Being British is, for many people, a multicultural, multiethnic identity. There is more to Emma and every one of us than our ethnic heritage.”

For her part, Raducanu embraces both her British nationality and her international background. After her win, she posted a photo of her holding both her trophy as well as a British flag. And in interviews, she often speaks about her parents and the countries where they were born.

In the past, she has cited Chinese tennis star Li Na as well as Romanian player Simona Halep as inspirations, and after the tennis final she addressed fans in Mandarin in a short video posted on the U.S. Open’s official account on Weibo, a popular social media platform in China.

Britain wasn’t the only place where people rushed to claim the tennis star as their own. In China, the hashtag “18-year-old ethnic Chinese young player wins U.S. Open championship” was viewed 200 million times on Weibo, and social media users said they were proud of Raducanu because of her Chinese heritage.