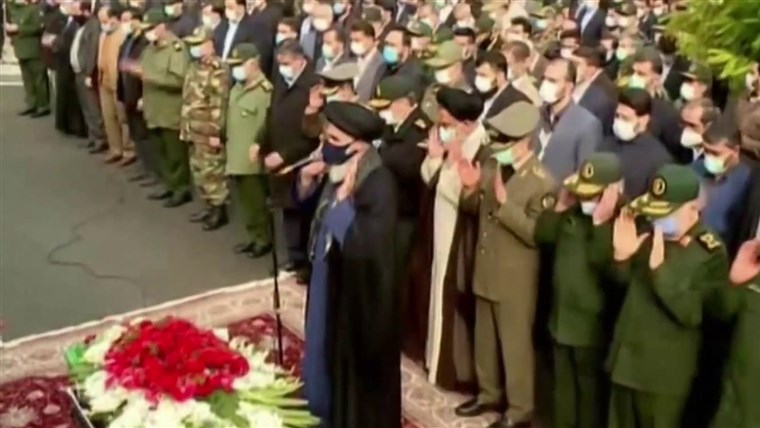 WASHINGTON — The assassination of a senior Iranian nuclear scientist shocked Iran’s leadership but will not derail the country’s nuclear program, which has been steadily advancing despite President Donald Trump’s “maximum pressure” policy, experts say.

When Joe Biden is sworn in as president on Jan. 20, he will have to contend with the reality that Iran has 12 times the amount of enriched uranium that it did in 2018, and that its estimated “breakout” time to build the bomb has dropped from 12 months to three to four months, according to U.N. inspectors.

Although the assassination represented a symbolic and a psychological blow, “it doesn’t fundamentally alter the fact that Iran has a nuclear weapons capability,” she said. “If Iran chooses to pursue nuclear weapons, it has the technical means to do so.”

Fakhrizadeh was killed Friday in an attack on his car about 40 miles east of Tehran in Damavand County, according to Iranian state media. The United States and Western governments believe he oversaw a covert nuclear weapons program, which U.S. intelligence agencies say was shut down in 2003. The non-military nuclear program continued after 2003 and the U.S. and others feared it was a cover for an eventual weapons project.

The U.N. International Atomic Energy Agency suspected Fakhrizadeh managed clandestine efforts to fit a warhead on a ballistic missile and test high explosives suitable for a nuclear weapon. In a 2011 report, the IAEA said that some weapons-related work continued with Fakhrizadeh playing the role of chief organizer.

Iran denies it ever had a nuclear weapons program, and it has accused Israel of orchestrating last week’s assassination. Israel has declined to comment on the incident.

“Iran has always maintained that our nuclear program is for peaceful purposes,” said Alireza Miryousefi, spokesperson for Iran’s mission to the United Nations. He cited a fatwa from the supreme leader, Ayatollah Ali Khamenei, that bans the development of weapons of mass destruction as contrary to Islam.

Despite Fakhrizadeh’s institutional knowledge and powerful connections within the regime, Iran’s nuclear work — which has been underway for decades — is not dependent on one scientist, Davenport said.

“It’s unlikely that removing any one individual is going to be a death blow for Iran’s ability to pursue nuclear weapons if it chooses to do so,” she said. “I don’t see it as a game changer in that sense.”

Fakhrizadeh is not the first senior nuclear scientist to be killed in Iran. Several other Iranian nuclear scientists were killed during the Obama administration, and nuclear facilities have been hit by apparent sabotage over the past decade. But Iran’s nuclear work continued unabated, and its know-how remains intact, experts said.

In 2011, an explosion killed members of a team overseeing Iran’s long-range missile program, but the project got back on course soon afterward, according to Jeffrey Lewis, an arms control expert and professor at the Middlebury Institute of International Studies.

Iran will be able to resume its nuclear weapons program if that’s what Ayatollah Khamenei chooses to do, Lewis wrote. “The graveyards are full of indispensable men. The only difference is that Khamenei now has a much greater incentive to do so,” he added.

Former U.S. officials and European diplomats worry that the assassination could provoke retaliation by Iran and undermine President-elect Joe Biden’s plans to revive diplomacy with Tehran. They say the killing appeared to be an attempt to undercut the next president.

Biden has promised to return the United States to the 2015 nuclear agreement, known as the JCPOA, that imposed strict limits on Iran’s nuclear work in return for an easing of economic sanctions. President Trump withdrew the United States from the multinational deal in 2018, and since then, Iran has increasingly flouted provisions of the accord, surpassing limits on uranium enrichment and centrifuges.

After the killing of Fakhrizadeh, coupled with suspected sabotage of a centrifuge assembly site in Natanz and the assassination of top general Qassem Soleimani, Iran faces a dilemma. If it chooses not to retaliate to keep the door open to diplomacy, the country will look weak and invite yet more covert attacks. But if it takes revenge on Israeli or U.S. targets, it could lose its best chance to lift sanctions that have left its economy in tatters.

Iranian retaliation “risks provoking a chain reaction,” according to Robert Malley, a former senior official in the Obama White House who helped negotiate the Iran deal. “Israel could choose to respond in kind and any such move could further complicate a U.S. return to the nuclear agreement, potentially denying Iran much-needed economic relief,” Malley, president of the International Crisis Group think tank, wrote recently in Foreign Policy.

In the coming weeks and months, Iran will have to consider how to keep its remaining nuclear officials safe, how to deter future attacks and whether retaliation will improve or undermine prospects of a diplomatic agreement with the incoming Biden administration, former U.S. officials said.

However, assassinations of other Iranian nuclear scientists 10 years ago did not dissuade Iran from pursuing diplomacy with the United States and other governments, said David Albright, founder and president of the nonprofit Institute for Science and International Security.

Albright said the death of Fakhrizadeh deprives Iran of an important figure who was adept at managing and organizing sensitive nuclear work.

If Iran chose to rush to build a bomb, it would be well-placed to build a device to detonate underground, Albright said. “I don’t think they would have trouble doing that and it wouldn’t take them that long,” he said.

“I think where his impact would be felt more is if they had to build a nuclear warhead that would work atop a ballistic missile,” Albright said. That would require an elaborate effort to coordinate the work of bomb makers and missile experts, while ensuring a reliable re-entry vehicle, he said.

“In that sense, I think it (the assassination) is a significant blow to their ability to reconstitute and build nuclear weapons, on a crash basis particularly,” he added.

A former senior U.S. intelligence official said “the construction of a nuclear weaponization program involves more than physics,” as it involves building a vast, covert enterprise of personnel, buildings and equipment.

“Fakhrizadeh had that experience as well as the ability to work with technical and defense leadership,” the official said.

Albright said the assassination, along with previous sabotage, sends a signal to Iran that it cannot assume any future nuclear work can be kept secret. “They can’t even protect their top guy,” he said. “They have to really worry.”

Miryousefi of Iran’s U.N. mission said that Iran has disrupted numerous plots and will remain vigilant against threats from abroad, but that the country’s nuclear work will go on.

“While a great scientist and a national hero has been brutally murdered by state-ordered terrorists, Iran’s peaceful nuclear program will continue according to plan,” he told NBC News in an email.