Millions of refugees are crossing back into Ukraine. See where they’re returning from.

Home WORLD NEWS Millions of refugees are crossing back into Ukraine. See where they’re returning from. 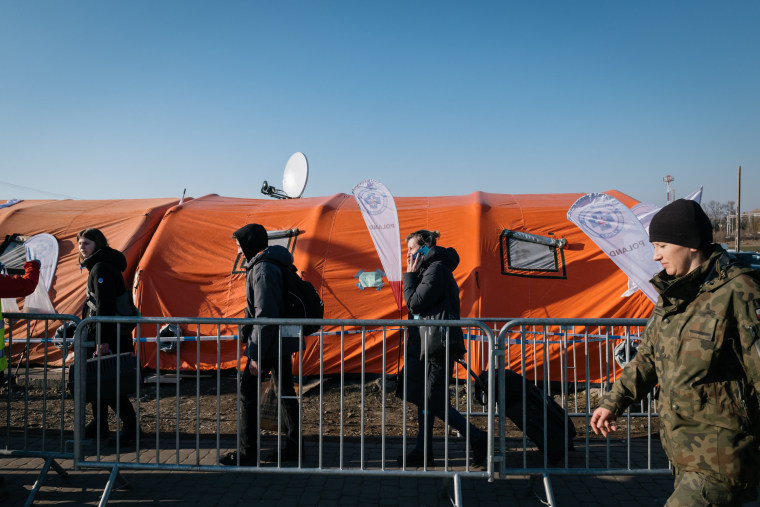 Ukrainians who left the country to escape the war with Russia are increasingly making their way back as the fighting enters its fifth month.

More than 8 million Ukrainians, out of the prewar population of 44 million, left their homes and crossed into neighboring countries such as Poland and Romania to seek safety after the invasion. But the gap between those departing and those re-entering Ukraine is narrowing, according to recent data from the United Nations. Since mid-May, that count has been particularly close, per an NBC News analysis.

“We came back because we really wanted to go home,” said Julia Fedosiuk, an attorney from Kyiv who returned to Ukraine earlier this month after spending more than three months in Poland. She fled the capital Feb. 25, the day after Russia invaded.For Fedosiuk, 37, leaving her home country was a “forced measure” to keep her children, Ivan and Vera, safe, but she said she always knew they would return home.

She decided to come back June 6, feeling that the security situation in Kyiv has improved since the Russian forces retreated in April.

Still, Russia continues to strike cities across the country. She spoke on the same day that Ukrainian officials said two residential buildings were hit by Russian missiles in the capital, killing two people and injuring several others.

While Fedosiuk has returned to work, she has been taking her children to her office in Kyiv every day, too fearful of a potential missile strike to leave them alone.

“We are scared,” she said, but added that they are determined to stay in Kyiv.

As Moscow’s troops began targeting civilian areas in the early days of the invasion, millions of Ukrainians packed whatever belongings they could carry and headed for safer ground in what the U.N. has called the fastest-growing refugee crisis in Europe since World War II.

Many settled in western Ukraine, which has seen the least amount of fighting, but others — mostly women and children, as men of military age are not allowed to leave the country — have moved further across Ukraine’s borders.

As of June 29, the U.N. refugee agency reported the cumulative number of crossings from Ukraine into neighboring countries had reached more than 8.4 million. But with the tally for the other direction at more than 3 million, more than one-third of those who have left may have returned to their home country.

While the gap between those departing and those entering has been shrinking since March, it narrowed to its smallest size in May, when an average of 46,000 refugees departed and 36,000 refugees returned, according to U.N. data. The latest numbers, current as of Wednesday, show an average of 56,000 people leaving and 37,000 returning.

This flow could change depending on the progress on the battlefield. Ukraine’s eastern region of the Donbas has seen the most intense fighting as Moscow tries to get full control of the area in what many observers say is turning into a war of attrition, with the Russian forces continuing to use heavy artillery to strike cities in the east and throughout the country.

Fedosiuk said many of her friends who have returned to Kyiv from Poland and other countries were not forced to leave and had the means to stay longer, but the majority just wanted to come home despite the continued fighting.

“It’s emotionally difficult to stay in another country for a long time,” she said.

More importantly, Fedosiuk said, there is a great desire to be of use in Ukraine.

“I think most people return precisely for the reason that we feel better here at home, even as there is a war going on,” she said.