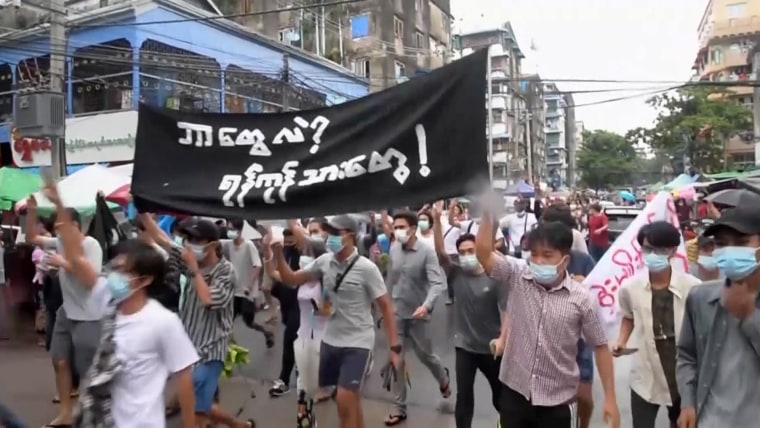 SYDNEY — Win Htet Oo has dreamed about competing in the Olympics since he was 6 years old.

But when the men’s 50-meter freestyle final takes place in Tokyo late Saturday, the swimmer from Myanmar, 27, will be watching at home.

Despite a recent Olympic qualifying time and a national record, he’s boycotting the Games in protest against the military coup that overthrew his country’s elected government six months ago this weekend.

“It’s been two decades in the making, slowly training, slowly improving, aspiring to be at the level where I could represent my country,” he told NBC News from his home in Australia earlier this week.

But then everything changed in the swimmer’s homeland when the military seized power in February.

“I knew it instantly — I could not represent Myanmar — not as long as the military was in charge,” he said.

Instead, he’s hoping to help keep the world’s attention on the country and put pressure on what he calls the “hypocritical” International Olympic Committee.

From hope to despair

Win Htet Oo was born in Malaysia to parents from Myanmar. After attending college in New York, he moved to Melbourne where he has focused on his swimming.

But it was a visit to Myanmar in 2016 that made him double down on his Olympic dream.

After more than 50 years of brutal military rule, a 2015 general election put Nobel Peace Prize winner Aung San Suu Kyi and her party in power, seen as a major step in the country’s troubled road to democracy.

“I saw a lot of hope. I saw a lot of energy and bravery, especially in the creative arts … That really inspired me to consider what I was doing as a swimmer, as an athlete,” he recalled.

The stars looked to be aligning for Tokyo 2020, with Win Htet Oo competing at the 2019 Southeast Asian Games and securing both an Olympic qualifying time and a national record in the 50-meter freestyle event.

Then came the military coup.

“There was disbelief … I felt so hopeful that the transition to democracy was going to succeed, no matter how slow the pace was going,” Win Htet Oo said.

To the alarm of human rights groups, the military has violently crushed protests across the country in a bid to consolidate power.

More than 900 people opposing the junta have been killed by security forces, drawing international condemnation and sanctions, including from the United States.

“Six months since the coup, the military junta has arbitrarily detained thousands, killed hundreds of civilians including dozens of children, and now people are left fending a deadly pandemic on their own,” Manny Maung, a Myanmar researcher at Human Rights Watch, said.

“This shows us how utterly unprepared and unfit the military is to govern … The economy has collapsed, the health care system has collapsed and aid is not reaching the most vulnerable people.”

After the coup, the military also took control of the Myanmar Olympic Committee — another reason why Win Htet Oo said there was no way he could compete in the national team.

He wrote to the International Olympic Committee and asked if he could come to Tokyo as an independent athlete. But the organization turned down his request.

With “no other options,” he withdrew from consideration before the Myanmar team was finalized.

“People need to know that the Myanmar military isn’t just another military that has taken power in some backwater, developing country,” he said.

“People think fascism is long dead after World War II, but no, it exists today in Myanmar and it’s shocking that the world continues to tolerate it.”

“This is a military that stands accused of genocide against the Rohingya and against other ethnic people in Myanmar,” he added, referencing a deadly 2017 crackdown against the Rohingya minority population in the Buddhist-majority country’s Rakhine state, which caused more than 1 million to flee.

“Over the past months, the NOC has repeatedly confirmed its focus on the preparation of its team for the Olympic Games Tokyo 2020,” it said. “In accordance with the Olympic Charter, any qualified/eligible athletes should be entered by their respective IOC-recognized NOCs.”

While the Myanmar Olympic Committee sent a team of seven athletes to the last Olympics in Rio de Janeiro, this time around just two are competing.

Win Htet Oo said he was deeply troubled by the IOC’s response to his request and is now calling for reform around how the organization recognizes national Olympic committees.

“They’re sticking to a political neutrality stance, even though I think the Myanmar Olympic Committee is breaching the Olympic Charter.”

“It’s hypocritical,” he said of the Olympics’ avowed aspirations to foster peace and harmony.

But experts say this is nothing new.

“What the IOC is interested in, is the financial bottom line and putting on a good show,” said Dr. Tom Heenan, who teaches sport studies at Melbourne’s Monash University.

“The Olympic Charter has noble words … But it’s all window dressing. The main aim of the Olympics is revenue for the IOC and the Olympic movement,” he said.

Heenan said turning a blind eye to human rights abuse is “part of the history of the IOC and the Olympic movement,” with the most egregious example being the 1936 Berlin Olympics.

The IOC has repeatedly said it must be “neutral” and stay out of politics, with its president Thomas Bach insisting earlier this year it is “not a super world government.”

It has increased its focus on human rights in recent years, with rights requirements included in the host city contract for the next Summer Games in Paris in 2024.

But it has also faced criticism over next year’s Winter Games, which will be held in Beijing amid growing international backlash against China’s treatment of its Uyghur minority, Hong Kong and Tibet.

China denies wrongdoing and its foreign ministry has criticized “the politicization of sports” and said any boycott is “doomed to failure.”

Meanwhile, Win Htet Oo is left to watch the final he dreamed of taking part in from another continent, knowing that he could have been there.

“[But] I have hope,” he said. “Let’s think about how sport can be a force for protecting fundamental human rights. This is the next big idea that the IOC and athletes need to really think about.”