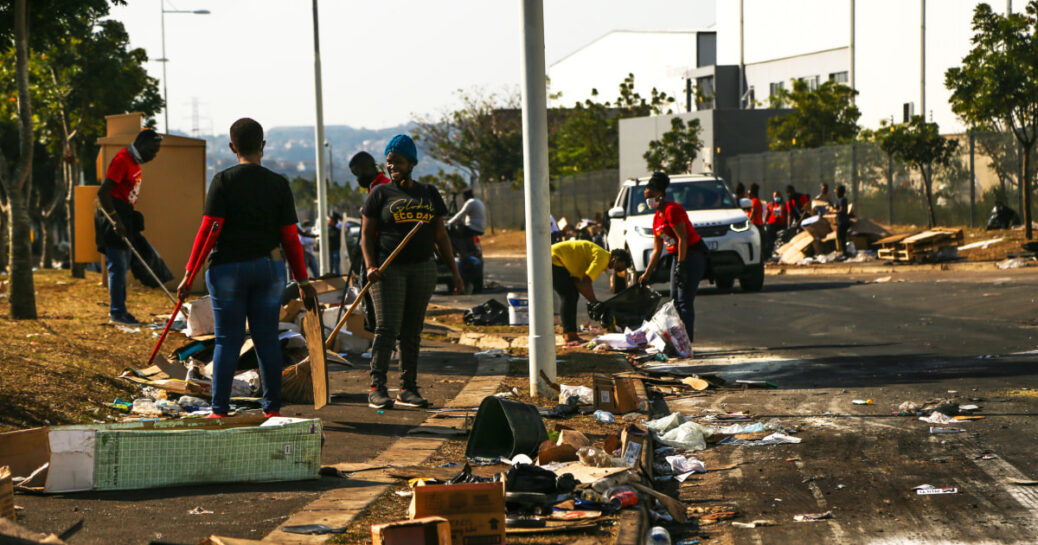 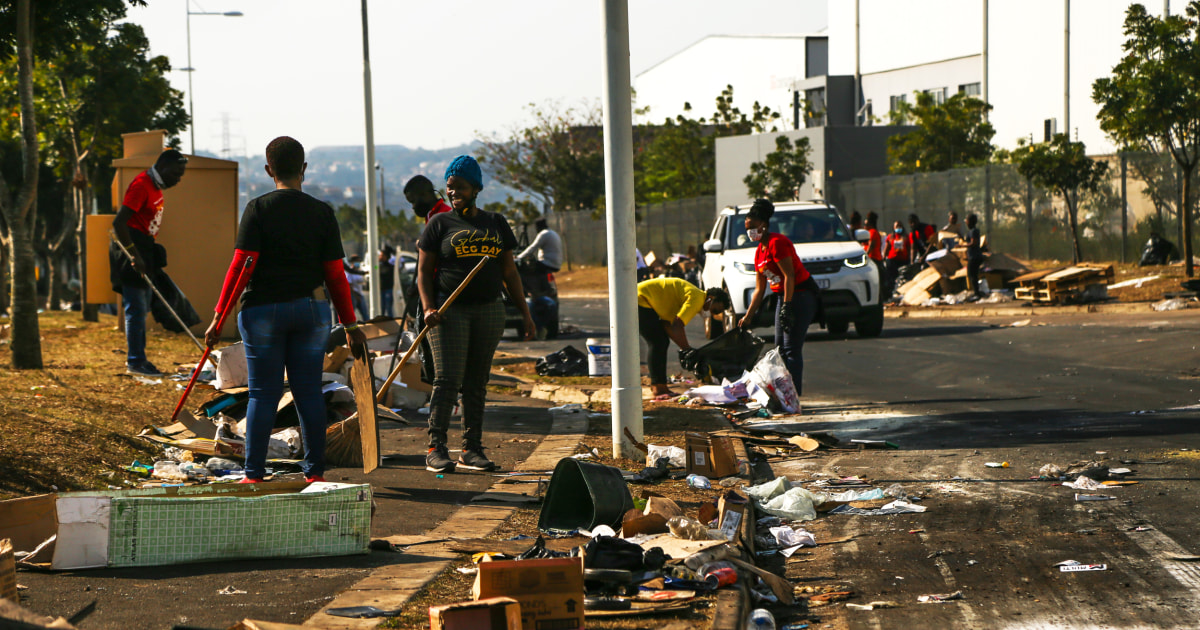 DURBAN, South Africa — Noxious smoke from days of riots and widespread looting hovered over parts of this lush seaside city over the weekend as residents came onto the streets to defend their homes and businesses from further violence.

“We need to stand (our) ground,” Margaret Westerhof, 42, told NBC News at a volunteer-erected traffic checkpoint on the edge of the suburb of Ballito. Normally an interior designer, Westerhof offered to serve as a media liaison for the community organization that sprung up in response to the unrest.

“It’s our duty to continue to support the local authorities … to patrol our areas, keep our businesses safe,” she added.

Nationwide protests began with the arrest of former President Jacob Zuma on July 7. He was sentenced to 15 months in prison for contempt of court after failing to appear before an inquiry investigating corruption and state capture during his administration.

What began as a political demonstration devolved into destruction not just in Durban — a city of 3.7 million where many of Zuma’s supporters live — but in the administrative capital of Pretoria and the largest urban center, Johannesburg.

Tires were set afire in the streets and shopping malls were gutted. At least 212 people were killed across the country, over 2,550 were arrested and more suspects were under surveillance, President Cyril Ramaphosa said Friday in a televised address to the country.

Ramaphosa admitted that the government had been “poorly prepared” to respond to such levels of violence. In an effort to regain stability, 25,000 troops with the South African National Defence Force were deployed to support police around the country, he said.

Until that added security is in place and quelling fears, Westerhof said the hundreds of volunteers in Ballito will control access in and out of the area.

“We really feel that we need to still be present, vigilant. And we can’t let our guard down just yet,” she said of the hundreds of people keeping the checkpoints manned in 4- to 12-hour shifts

After days of violence, Westerhof said the sight of a truck belonging to a supermarket chain breezing through the checkpoint Saturday was “nothing short of a miracle.”

Durban stores that weren’t ransacked have rationed food, gasoline and other supplies to stretch out stock after the distribution of goods was disrupted by truck burnings and highway closings.

While Ballito residents remained on guard, in other areas, the cleanup was underway. About three dozen volunteers from a Durban church methodically swept up debris including raw chicken pieces from a food plant on the streets of a business park.

“We came to show people that they must not only focus on the … bad things happening all over the country. They must also focus on the good,” said Apostle Motsepe, 37, a pastor at the church.

Motsepe said he was hopeful there wouldn’t be another wave of riots. But the complex factors that contributed to the unrest remain unresolved.

Outrage over the jailing of Zuma — a former anti-apartheid freedom fighter — could be triggered again as the corruption inquiry and separate charges against him related to a 1990s arms deal move forward in the courts.

Deeper issues fueling the unrest include extreme poverty and inequality that have been exacerbated by the pandemic. The country’s unemployment rate surpassed 32 percent in the first quarter of the year.

“You can walk across the street and see a Rolls-Royce, but you can walk down the street and find someone without clothes,” Motsepe said. “What you are seeing is a situation where the disgruntled society finally found an opportunity to express themselves.”

The toll of the damage is still being discovered in Durban.

A fire at an agricultural chemical plant hit by rioters was still smoldering Saturday, emitting black smoke and rank fumes. At a nearby lagoon, the water had turned an unnatural turquoise and mounds of dead fish and crabs had surfaced.

“It’s terrible,” said Sihle Ngcobo, 27, who works for a hazardous waste management company that is leading the cleanup of the dead aquatic life.

“Some people eat these fish,” he said, explaining why removing the carcasses was important to public safety.

Despite the fears and the disappointment in local institutions to prevent the riots, Westerhof said the uprising of volunteers across the country has been heartening.

“It’s amazing, the patriotic nature of a South African,” she said. “It’s amazing in a crisis who comes forward.”