Armed with brooms, volunteers descend on Beirut to do job government won’t 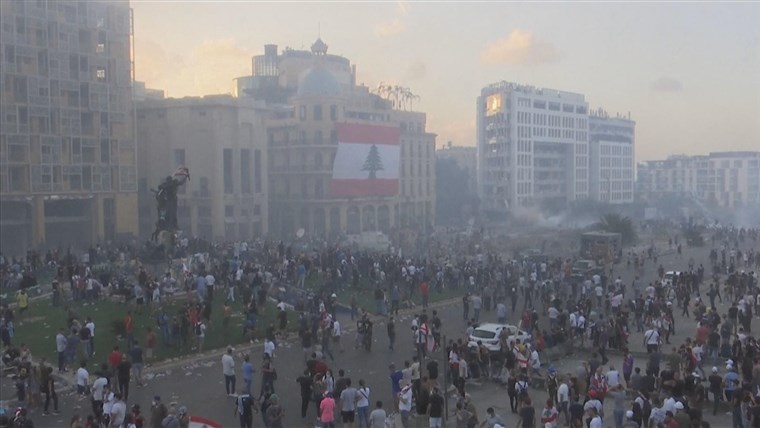 BEIRUT — A citizen’s army descended on the streets of Beirut after last week’s explosion. Arriving on buses from all corners of the country and armed with brooms, thousands of volunteers packed the areas hit hardest by the blast and stayed all week.

Every aspect of the response to the deadly explosion has been volunteer-led. This was the Lebanese people turning out en masse to do a job that, in most countries, would have been handled by the government.

The firefighters ran to the port to try to get the fire under control before the explosion happened. The Civil Defense immediately began digging through the rubble to find survivors. The Red Cross whizzed the injured to hospitals and treated them among the rubble across the city.

The Aug. 4 blast killed at least 171 people and injured thousands occurred when a fire in a port warehouse ignited hundreds of tons of ammonium nitrate.

Outgoing Health Minister Hamad Hassan said Tuesday that between 30 and 40 people are still missing, the Associated Press reported. Of the injured, 1,500 needed special treatment while 120 remain in intensive care, he said.

When the immediate chaos settled, thousands of people took to the streets around the blast site. They would have to move the rubble, wipe the blood and rebuild people’s lives because they knew the government would not. Their instincts were correct.

“We have to come together, the government has done absolutely nothing, not even the municipality. It’s always up to us to rebuild our city when they destroy it like this,” Afif Ayad, the founder of “My People, My Responsibility,” a nongovernmental organization, said.

“We live in a parallel world at the moment and have zero trust in anything the government does. We don’t need them and we don’t care,” Ayad said. “We decide what we want. We feed each other and we fight side-by-side together against them. It’s our city to get back on track, not theirs.”

As volunteers helped clean up, protesters also took to the streets expressing their frustration at the ruling elite and blaming them for chronic mismanagement and corruption that is believed to be behind the explosion as well as the country’s economic crisis and grave inequality.

Lebanese Prime Minister Hassan Diab announced Monday that he and his government were stepping down as the fallout from the explosion deepened a political crisis in Beirut. Diab said in a brief televised address that he had come to the conclusion that corruption in the country is “bigger than the state.”

Most people here are grieving and angry; helping to put the lives of others back together has been the only thing they could do to feel less helpless about their country.

“Even if this wasn’t about coming and doing a job that the government should be doing instead of us — it’s about feeling like I need to do something about all the injustice that happened,” said Rami Mehio, a 26-year-old volunteer.

Sweltering under the August sun, volunteers fortified themselves with donations of food and water. The nightlife hubs of Mar Mikhael and Gemmayzeh were soon busier than a Saturday night.

“We’ve had to turn volunteers away at some points over the last few days, there were so many you could barely move in here,” said Yusef Ahmed, the concierge of a building just 250 meters (about 275 yards) from the blast site.

“Some of the boys trying to do the heavy lifting are just children, but you can’t stop them, they are so determined to help.”

Over 60 volunteers traipsed through metal window frames, doors, glass and broken furniture up and down the blood-soaked stairs where bodies had been pulled just days before.

Many who fled Beirut after the explosion have returned to homes that have already been cleaned up by strangers.

As the volunteers’ rescue-mission drew on, it became increasingly sophisticated and coordinated. NGOs divided up streets, each looking after a certain area so the chaos could be managed effectively.

A week on from the blast, efforts have now turned to long-term recovery.

With Google maps volunteers track where piles of recyclables have been swept so that they can organize pick-ups for the shattered glass to be broken down into sand and then turned into usable glass.

In Gemmayzeh, one of the hardest-hit areas, the NGO “My People, My Responsibility” have set up camp.

On a big paper map of their designated street they tick off the houses that they’ve visited to assess the damage. Their volunteers include architects and structural engineers who are checking homes for structural damage as well as material.

The various NGOs are, between them, sending engineers to every affected house. The data they collect will help the international community figure out what the post-disaster city needs most, said Jack Ata, who is coordinating volunteers at the base camp point.

On Friday, an army truck full of soldiers sat and watched as a group of men tried to pick up a destroyed car from the rubble of a shopfront with their bare hands.

As the piles of debris grew larger over the week, with no one coming to collect them, community groups hired machinery to move it themselves.

“This city has been destroyed 100 times, and each time we rebuild it — but it doesn’t ever get rebuilt by the government. It’s always rebuilt because of the people,” Ayad said.

“If you want to understand the level of disaster that is Lebanon: On a Monday morning, the streets are packed with volunteers. This is what unemployment looks like.”