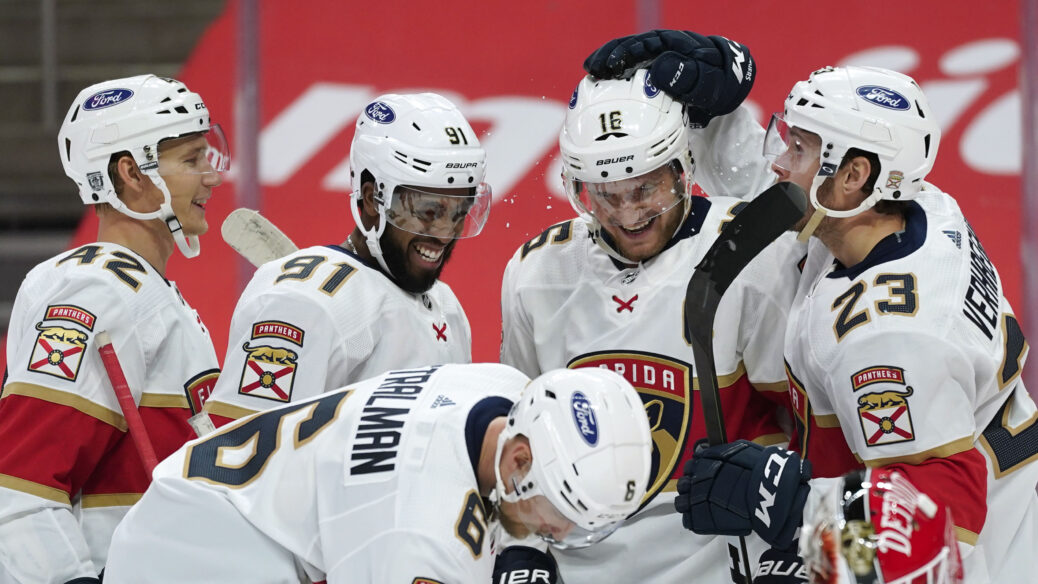 Patric Hornqvist scored in the first and third periods to help the Florida Panthers start and finish strong in a 7-2 victory over the Detroit Red Wings on Friday night.

Juho Lammikko and MacKenzie Weegar had goals on consecutive shots in the opening period, and Hornqvist made it 3-0 in a four-shot stretch that doomed a Detroit team averaging an NHL-low 1.9 goals a game.

“We were all over them in the first period and we were rewarded,” Hornqvist said. “We were on top of them all night.”

Florida’s Chris Driedger made 30 saves, including a spectacular stop by lunging with his stick to deny Darren Helm in the second period.

“I don’t really know what happened I was so out of position,” he said.

“When we’re playing the right way, we’re as good as anyone and that’s what we’re showing right now,” Hornqvist said.

Detroit’s Thomas Greiss gave up four goals and stopped nine shots in the first period. Jonathan Bernier replaced Greiss and had 23 saves over the last two periods for the Red Wings, who matched a season high by allowing seven goals.

After winning an NHL-low 17 games last season, the Red Wings are among the league’s worst teams with 15 losses in 19 games.

“On the road, I thought we figured out what we needed to do to have success, but this wasn’t it,” Detroit center Frans Nielsen said. “This was unacceptable.”

Aleksander Barkov restored the Panthers’ three-goal cushion a little more than a minute after Detroit’s Bobby Ryan scored late in the first period.

Valtteri Filppula was credited with a goal for the Red Wings on a shot that went off Florida forward Anthony Duclair’s stick, separating the teams by three goals for the third time in the game.

“On the ice, I told (Driedger), `My bad,’” Duclair recalled and added his postgame joke. “After the game, I told him he should’ve saved that.”

“It’s a 3-1 game with a lot of hockey left, so the worst thing we could do was to give up a goal right away,” Nielsen said.

Duclair made up for redirecting a shot into his own net with a goal midway through the third to put the Panthers ahead 7-2.

“We were getting beat up the ice and beaten in the corners of our own end,” Nielsen said.

Five of Florida’s 15 games have been against the lowly Red Wings, who have become even more of a common opponent because the Panthers have had series canceled because of COVID-19 issues. The Panthers have won four of five in the eight-game series.

Last month, the Panthers won at Detroit 3-2 on consecutive days. Florida also beat the Red Wings by one goal at home, but also allowed them to earn a rare win and end an eight-game losing streak earlier this month.

The Panthers have won six straight on the road against the Red Wings and 11 of last 13 games overall against them.

Florida’s Jonathan Huberdeau has 22 points, the most by a player in franchise history through 15 games.

Greiss was benched after giving up four goals on 13 shots in the first period. Bernier was in net over the final two periods and was 21.5 seconds away from holding the Panthers scoreless in the second period, but Ekblad scored to put them ahead 5-1. He gave up two more goals in the third.