Bears to hire Matt Eberflus as next head coach: report 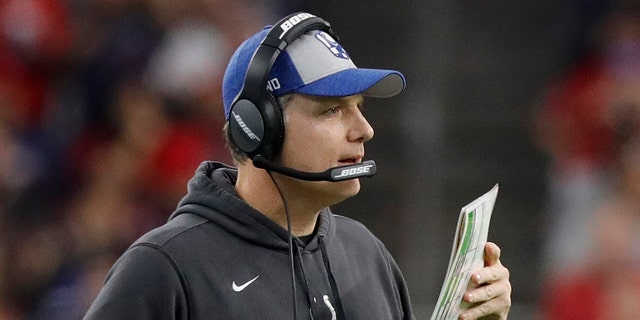 The Chicago Bears reportedly became the latest team on Thursday to hire a new head coach.

The Bears are set to name Indianapolis Colts defensive coordinator Matt Eberflus as their next head coach replacing Matt Nagy, who was fired after the end of the 2021 season, according to ESPN.

Defensive coordinator Matt Eberflus of the Indianapolis Colts calls a play on the sideline in the second half against the Houston Texans during the Wild Card Round at NRG Stadium on Jan. 5, 2019 in Houston, Texas. (Tim Warner/Getty Images)

Eberflus has been in the NFL ranks since 2009 and before that served as an assistant for Toledo from 1992 to 2000 and as the defensive coordinator at Missouri from 2001 to 2008.

BRONCOS TO HIRE NATHANIEL HACKETT AS NEXT HEAD COACH: REPORT

Head coach Matt Nagy of the Chicago Bears reacts on the sidelines during the second quarter of the game against the New York Giants at Soldier Field on Jan. 2, 2022 in Chicago, Illinois. (Quinn Harris/Getty Images)

Before Eberflus got to Indianapolis, the team was 30th in both points and yards allowed.

Chicago is hoping Eberflus will be the guy to lead the Bears back to prominence.

There appeared to be a lot of hope in Nagy’s first season as head coach. The team was 12-4 and won the NFC North division. The team made the playoffs that year but lost in the wild-card round to the Philadelphia Eagles. Nagy and the Bears would have a string of 8-8 seasons with one more playoff appearance yielded. The team finished 4-12 in 2021, leading to his dismissal.

Chicago Bears quarterback Justin Fields looks on during a game against the Minnesota Vikings on Dec. 20, 2021, at Soldier Field in Chicago, Illinois. (Robin Alam/Icon Sportswire via Getty Images)

Chicago will go into the 2022 season with highly touted quarterback Justin Fields at the helm and a bunch of other question marks heading into free agency. Chicago does not have a first-round pick in the upcoming draft.