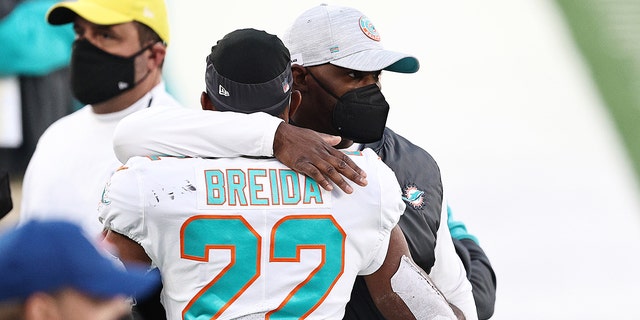 John Elway, the Denver Broncos’ president of football operations, dismissed the claims made by Brian Flores in his racial discrimination lawsuit against the team and the NFL on Thursday.

Elway said in a statement he wasn’t initially going to address Flores’ claims made in the lawsuit filed earlier this week, but he “could not be silent any longer with my character, integrity and professionalism being attacked.”

Flores said in the lawsuit that during his interview with the Broncos before Flores got the Miami Dolphins job, Elway showed up to the interview an hour late and appeared to be hungover. Flores claims he was interviewed for that job because of the Rooney Rule, which is an NFL policy that requires teams to interview minority candidates for head coaching positions. Flores believes he was never a real candidate for the job.

Head coach Brian Flores of the Miami Dolphins hugs Matt Breida on the sidelines during their NFL game against the New York Jets at MetLife Stadium on Nov. 29, 2020, in East Rutherford, New Jersey. (Elsa/Getty Images)

Elway said Thursday he took Flores “very seriously as a candidate” and enjoyed the interview, which lasted more than three hours. He said he was “prepared, ready and fully engaged” during their talk.

“It’s unfortunate and shocking to learn for the first time this week that Brian felt differently about our interview with him,” the former NFL quarterback added.

“For Brian to make an assumption about my appearance and state of mind early that morning was subjective, hurtful and just plain wrong. If I appeared ‘disheveled,’ as he claimed, it as because we had flown in during the middle of the night – immediately following another interview in Denver – and were going on a few hours of sleep to meet the only window provided to us.

“I interviewed Brian in good faith, giving him the same consideration and opportunity as every other candidate for our head coaching position in 2019.”

The Broncos pushed back on Flores’ claim on Tuesday.

John Elway, president of football operations for the Denver Broncos, stands on the field before a game between the Broncos and the Cincinnati Bengals at Empower Field at Mile High on Dec. 19, 2021, in Denver, Colorado. (Dustin Bradford/Icon Sportswire via Getty Images)

“The allegations from Brian Flores directed toward the Denver Broncos in today’s court filing are blatantly false,” the team said. “Our interview with Mr. Flores regarding our head coaching position began promptly at the scheduled time of 7:30 a.m. on Jan. 5, 2019, in a Providence, R.I., hotel. There were five Broncos executives present for the interview, which lasted approximately three-and-a-half hours—the fully allotted time—and concluded shortly before 11 a.m.

“Pages of detailed notes, analysis and evaluations from our interview demonstrate the depth of our conversation and sincere interest in Mr. Flores as a head coaching candidate.

“Our process was thorough and fair to determine the most qualified candidate for our head coaching position. The Broncos will vigorously defend the integrity and values of our organization—and its employees—from such baseless and disparaging claims.”

Flores appeared on CBS’ morning show “CBS Mornings,” along with his attorneys Douglas H. Wigdor and John Elefterakis, and said he hopes the filing would “create some change.”

“We didn’t have to file a lawsuit for the world to know there’s a problem from a hiring standpoint in regards to minority coaches in the National Football League. The numbers speak for themselves. We filed a lawsuit so that we can create some change, and that’s important to me. We’re at a fork in the road right now,” he said. “We’re either gonna keep it the way it is, or we’re gonna go in another direction and actually make some real change where actually changing the hearts and minds of those who make decisions to hire head coaches, executives, etc. We gotta change hearts and minds.”

The Dolphins and New York Giants are also named in Flores’ suit.