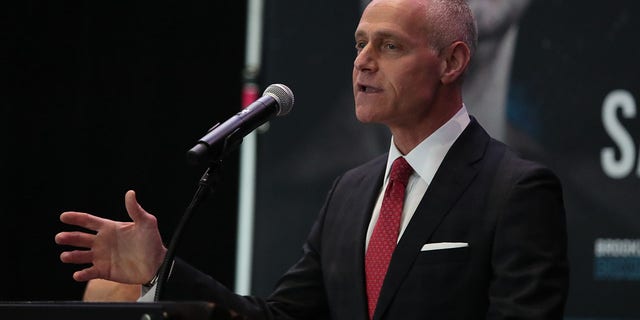 At Big 12 Media Days, Yormark was asked about potentially adding teams from the Pac-12 conference, two weeks after USC and UCLA announced their move to the Big Ten conference in 2024.

Brett Yormark CEO of Barclays Center, talks with members of the media about the upcoming PBC on FOX card at Barclays Center on June 18, 2019, in New York City. ( Photo by Edward Diller/Getty Images)

“As I said in my opening comments, we’re exploring all options,” Yormark said on Wednesday. “And we’re open for business. And optionality is good, and we’re vetting all of them. I think it’s fair to say I’ve received a lot of phone calls, a lot of interest. We’re exploring those levels of interest. Nothing is imminent.”

Following the news out of Los Angeles, the Pac-12 also said they were looking to expand.

“The Pac-12 Board of Directors met this morning and authorized the Conference to explore all expansion options,” the Pac-12 said on Twitter. “The 10 university presidents and chancellors remain committed to a shared mission of academic and athletic excellence on behalf of our student-athletes.”

College athletics is moving toward having two super conferences in the SEC and the Big Ten, with Texas and Oklahoma moving from the Big 12 to the SEC in 2025. The additions of USC and UCLA to the Big Ten changed the landscape of college football as schools try to position themselves moving forward.

Head coach Brent Venables of the Oklahoma Sooners stands with his team for the alma mater during their spring game at Gaylord Family Oklahoma Memorial Stadium on April 23, 2022, in Norman, Oklahoma.   ( Photo by Brian Bahr/Getty Images)

While the Big 12 will be losing Oklahoma and Texas in the next few years, the conference will be adding four schools in 2023, with BYU, UCF, Houston, and Cincinnati joining the conference.

Yormark also discussed the new era of Name, Image, and Likeness (NIL), saying that he’s a proponent for players profiting off of their brands.

A Big 12 logo is seen on the turf during the Orange-White Spring Game at Darrell K Royal-Texas Memorial Stadium on April 23, 2022 in Austin, Texas.  (Photo by Tim Warner/Getty Images)

“I can say at a high level, I’m an advocate of NIL,” Yormark told reporters Wednesday. “I got my feet wet at some degree at Roc Nation, where we had been engaged in NIL. From a personal point of view [I] have not really spoken to our key stakeholders about it. I think there needs to be guardrails. There probably needs to be uniformity. And maybe the conference needs to take a bigger role in what NIL looks like moving forward.”

Yormark will take over duties as Big 12 commissioner on Aug. 1.

Joe Morgan is a Sports Reporter for Fox News.