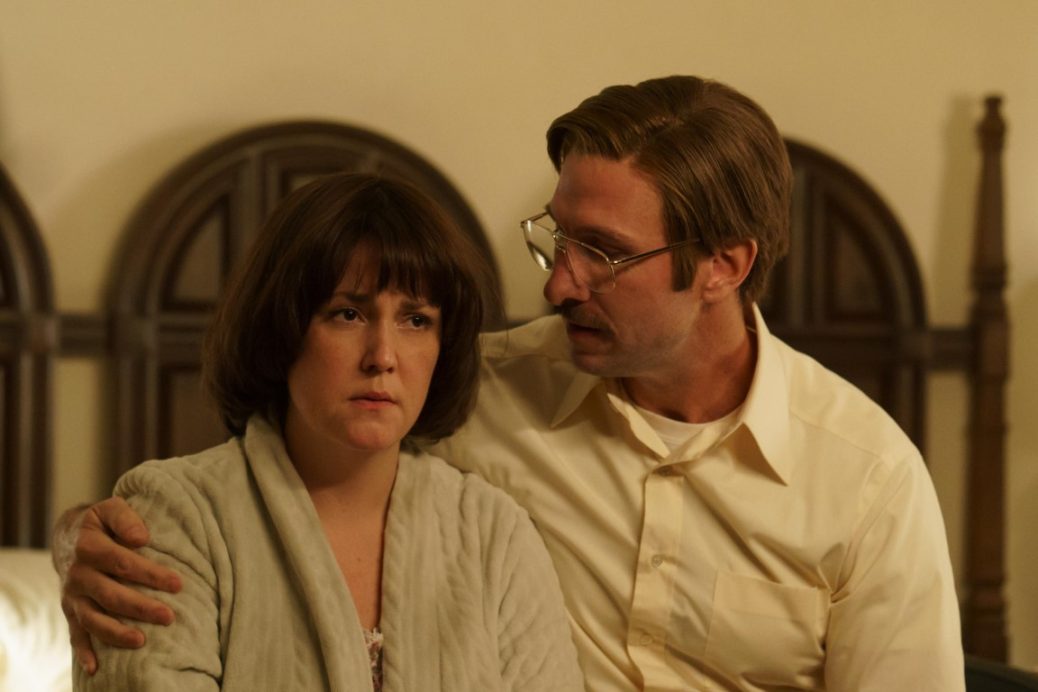 The Pitch: The story of Candy Montgomery is almost too gruesome and eerily-timed to feel true: On Friday, the 13th, one June in 1980, a pleasant, well-liked suburban housewife in a bucolic northeastern Texas town went over to her friend and neighbor Betty Gore’s house, and murdered her with an axe.

She slashed her 41 times, 40 of them while her heart was still beating. Then, she took a shower in Betty’s home to clean off the blood, and drove back home to continue her day like nothing had happened… with Betty’s newborn infant crying in her dead mother’s home for thirteen hours before the body was found.

Even crazier than that? Candy would end up being found not guilty.

Naturally, it’s the kind of lurid true-crime story that would spawn not one, but two miniseries in our murder-happy pop culture landscape: another is set to premiere later this year on HBO Max with Elizabeth Olsen.

But Hulu’s Candy, which stars Jessica Biel in the title role (replacing Elisabeth Moss, who dropped out), reached the finish line first, a five-night limited series event that seeks to emulate the old-fashioned TV miniseries model of airing a new episode each weekday of its release before culminating on, you guessed it, Friday the 13th.

And really, that throwback model may be Candy‘s most novel approach, which is bad news for the show’s sense of novelty. Unfortunately, while creators Nick Antosca (The Act) and Robin Veith (Mad Men, The Expanse) and their creative team have a (literally) killer cast and oodles of atmosphere to work with, there may not be much nutrition behind the sickly-sweet melodrama of Candy‘s ripped-from-the-headlines events.

I Want Candy: In fits and spurts, Candy hopes to be a character study, both of the titular murderer and her prey. Biel, dressing down Monster-style in a frizzy ’80s wig and big round glasses, plays Candy as a woman finally fed up with the repetitive monotony of homemaking.

Her husband, Pat (Veep‘s Timothy Simons) is a gormless, well-meaning dork who’s as nice as he is deeply boring, and a stray story from a fellow church member who recounts her post-separation dalliances lights a fire under her to start an affair of her own. To her credit, Biel does a lot with such a mercurial character, never indicating too closely the extent of Candy’s premeditation that fateful June morning.

Same goes for Melanie Lynskey, who channels a lot of that pent-up rage she’s used so well in Yellowjackets earlier this year; frowning under a bowl-cut wig and swimming hopelessly in mumus, Betty’s pre-murder flashbacks parallel Candy’s own misery nicely. Where Candy finds purpose and life in her delusions, Lynskey’s Betty is beaten down by age, the stresses of work and motherhood, and the relative disinterest of dull mope Allan (Pablo Schreiber, bringing back the ol’ pornstache once more).

Both together and apart, both actresses make a meal out of the humdrum tedium of their characters’ lives, bolstered by Michael Uppendahl’s downright Soderberghian direction — all distanced shots, dimly-lit tacky homes drenched in depressing browns and beiges.

The show is its most cohesive, though, when it explores the nuclear-family hell of heteronormativity that drives Betty to misery and Candy to murder: They’re Betty Drapers without the glamour, women of substance and intelligence hopelessly stuck in meandering lives their church and community told them to have.

One Day at a Time: But like so many of these limited series, especially lately, Candy suffers from some deep-seated pacing and tonal problems. Episode 1 comes out the most unscathed, a neatly-structured hour that shows us the before and after of Candy’s June 13th actions, the calm followed by the barely-concealed panic, before finally circling back to indicate something gone horribly wrong.

But the second and third hours, which exist largely in flashback to show the adulterous circumstances behind the alleged murder, overplay their hand to the show’s detriment. Try as they might, Candy and Betty’s life circumstances aren’t complicated enough to fill two entire hours of hemming and hawing about the ethics of infidelity, and scene after scene of the isolating oppression of suburban wifehood (neither of which break the mold of these kinds of stories).

The actors are putting in fine work, and Ariel Marx’s simmering, frayed-nerve score goes a long way to establishing the living hell of boredom in which both women exist. But that can only take you so far if the moment-by-moment work isn’t that interesting.

The same goes for the last two hours, which finally goes for the slow-burn investigation (featuring some admittedly-cute cameos we won’t spoil here) and bizarre trial proceedings that followed, in which Candy argued she killed Betty in self-defense after the latter discovered the former’s affair.

The final hour gives us a few neat flourishes to shake up the legal-drama proceedings we’ve seen a million times before: Raul Esparza returns to the courtroom post-SVU (Veith was a producer on that show as well) to plead Candy’s case, a role only slightly modified by his big, bushy mustache and the heavy implication he’s more involved in Candy’s personal life than he might like to admit to the court.

And Lynskey returns to the screen in an unexpected way, a witness to her own murder trial, face twisted in disbelief as the justice she (and the audience) expect starts to take perverse new directions.

The Verdict: There’s a distinct voice and sense of style to Candy, to be sure, and Biel is playing the role as if her career depended on it (a valiant attempt to escape the shackles of beautiful movie star to prove she’s got the chops to handle meatier characters).

Trouble is, for how mysterious the real woman and her motivations are, Biel’s stuck playing too many conflicting notes: jealous housewife, traumatized child, Ryan Murphy-level camp queen. And really, it’s that disconnect between the low-wattage horror movie and the John Waters-y camp trappings of the story that keeps Candy from feeling consistent or all that complete.

Where’s It Playing? Candy unwraps itself one morsel at a time each weekday from Monday, May 9th to Friday, May 13th on Hulu.