Trump signs EOs on health care, but does little to change existing legislation 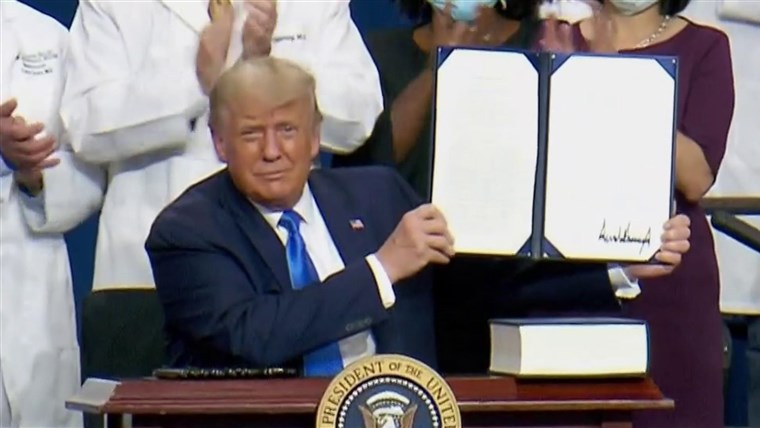 WASHINGTON — President Donald Trump announced two new health care executive orders Thursday on protecting pre-existing conditions and preventing surprise billing as the president seeks to shore up his support on an issue that remains top of mind to voters amid to the ongoing coronavirus pandemic.

The actions, however, have minimal impact. The surprise billing order requires Congress to pass legislation and pre-existing conditions are already protected under the Affordable Care Act, legislation that Trump is currently fighting to get rid of.

Trump has been promising a health care overhaul since his 2016 campaign for president. But nearly four years into his administration and as the country suffers from one of the worst health care crises in its history, Trump has struggled to land on a concrete alternative to the Affordable Care Act, which continues to grow in popularity.

In June the Trump administration asked the Supreme Court to repeal Obamacare, arguing that the individual mandate is unconstitutional and that the rest of the law must be struck down with it. The Supreme Court has scheduled oral arguments for Nov. 10, just a week after Election Day.

“I’m in court to terminate this really, really terrible situation. If we win, we will have a better and less expensive plan that will always protect individuals with pre-existing conditions,” Trump claimed Thursday. “If we lose, what we have now is better than the original version of Obamacare by far, much better.”

Secretary of Health and Human Services Alex Azar defended the need for an executive order on pre-existing conditions to reporters on Thursday, pointing to the Supreme Court case. Azar said that the White House wanted to ensure that Americans will be protected even if the ACA is struck down by the Supreme Court.

But the executive order appears to fall short of that goal. The order states that protecting pre-existing conditions was “the policy of the United States” but did not provide any legislative guarantees that Americans would not lose such protections if the ACA were nixed by the Supreme Court.

“The historic action I’m taking today includes the first-ever executive order to affirm it is the official policy of the United States government to protect patients with pre-existing conditions,” Trump said. “This is affirmed, signed, and done so we can put that to rest.”

When pressed by reporters earlier Thursday on why Trump was signing an executive order directing Congress to pass legislation on surprise billing rather than signing an order to fix the problem right away, Azar said “that is the plan the president plans to announce. It is what it is, as described.”

Just minutes into his speech, which was billed as an official White House event, Trump criticized his opponents, Joe Biden and Kamala Harris, as well as other Democrats for their “socialist” healthcare plans. Trump also spent much of his speech listing off steps he has taken as president to address health care access — ranging from telehealth to veteran choice.

Trump campaigned in 2016 on repealing the ACA but fell just short in Congress in 2017.

Trump has recently used executive actions to address issues important to voters this election cycle, such as coronavirus economic relief. Similar to Thursday’s orders, many of those actions have been largely symbolic and have not led to significant or meaningful policy change.