Is the U.K. coronavirus variant deadlier? It’s too soon to know for sure

Home LIFESTYLE HEALTH & FITNESS Is the U.K. coronavirus variant deadlier? It’s too soon to know for sure 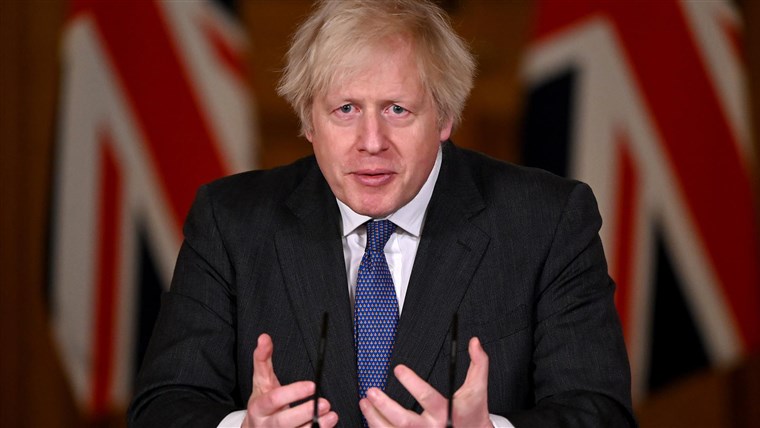 British Prime Minister Boris Johnson suggested Friday that the coronavirus variant discovered in the U.K. may be deadlier than other versions of the virus, though public health officials stressed that there is much uncertainty around this conclusion.

“In addition to spreading more quickly,” Johnson said during a news conference, “it also now appears that there is some evidence that the new variant that was first identified in London … may be associated with a higher degree of mortality.”

The variant was first identified last September and has been linked to the surge of infections observed in the U.K. late last year. It’s widely accepted that the variant is more contagious, though scientists have previously said it does not appear to be more harmful.

Johnson’s announcement was based on a report from the country’s New and Emerging Respiratory Viruses Advisory Group, or NERVTAG. The data are preliminary, and found that among a subset of patients, there appeared to be an increase in mortality in those who were infected by the U.K. variant, called B.1.1.7, compared with other variants.

“If you took a man in their 60s, the average risk is that for a thousand people who got infected, roughly 10 would be expected to unfortunately die of the virus,” Dr. Patrick Vallance, the U.K.’s chief scientific adviser, said during the news conference. “With the new variant, for a thousand people infected, roughly 13 or 14 might be expected to die.”

But Vallance advised caution. “I want to stress that there is a lot of uncertainty around these numbers, and we need more work to get a precise handle on it.”

Others agreed that more research is needed.

“There is evidence from some, but not all, data sources which suggests that the variant of concern which was first detected in the U.K. may lead to a higher risk of death than the nonvariant,” Dr. Susan Hopkins, the strategic response director at Public Health England, said in a statement. “Evidence on this variant is still emerging and more work is underway to fully understand how it behaves.”

The U.S. Centers for Disease Control and Prevention said in a statement that the agency had reached out to colleagues in the U.K., but had “not yet seen the data nor had an opportunity to speak with colleagues in the United Kingdom.”

Angela Rasmussen, a virologist at the Georgetown University Center for Global Health Science and Security in Washington, D.C., said the data from the U.K. are not “particularly convincing” and did not take into account a number of unrelated reasons for a higher death rate, including quality of care.

Dr. Charles Chiu, a professor of lab medicine at the University of California, San Francisco, said he “would be hesitant to draw any conclusions from that information regarding the virulence of the variant without much more data, because there are so many potentially confounding factors that may explain these observations.”

“I haven’t seen any evidence that the new B.1.1.7 variant in the U.K. or any SARS-CoV-2 variant is more deadly,” Chiu said, referring to the virus that causes Covid-19.

The new report from NERVTAG is “hard to dismiss,” said Jason Kindrachuk, an assistant professor of medical microbiology and infectious diseases at the University of Manitoba in Winnipeg. But he also stressed that the findings would have to be confirmed with lab research.

Still, the possibility is worrisome. And for those at high risk of complications from Covid-19, the prospect of a deadlier variant is cause for concern.

“An increased case fatality rate is certainly possible with a virus that has upped its game in transmission,” Ian Jones, a professor of virology at the University of Reading in the U.K., said in a statement. “But grim as it sounds, whether the fatality rate is 1 percent or 1.3 percent doesn’t really change the fact that for a minority of people this is a very dangerous virus that is best avoided.”

The Centers for Disease Control and Prevention recently suggested that the U.K. variant could be the predominant strain in the U.S. by March. Given that there is already evidence the variant makes the virus more transmissible, mitigation efforts, such as face coverings, physical distancing and regular hand-washing, are more important than ever.

Vallance also noted that the Pfizer-BioNTech vaccine appears to be effective against the U.K. variant.

Just two days ago, “Pfizer-BioNTech did studies showing that there was very good neutralization of the variant virus by the blood taken from people who had been vaccinated,” Vallance said.

“So there is increasing confidence, coupled with what I think is a very important clinical observation, that individuals who have been infected previously and have generated antibodies appear to be equally protected against the new virus and the old variant.”

That means it’s essential to get people vaccinated quickly.

“I don’t know if there are any more alarm bells that can be rung to say we have to figure out vaccine rollouts and get vaccines into the arms of people, not only in the U.S. or Canada but across the globe,” Kindrachuk said.

Denise Chow is a reporter for NBC News Science focused on general science and climate change.