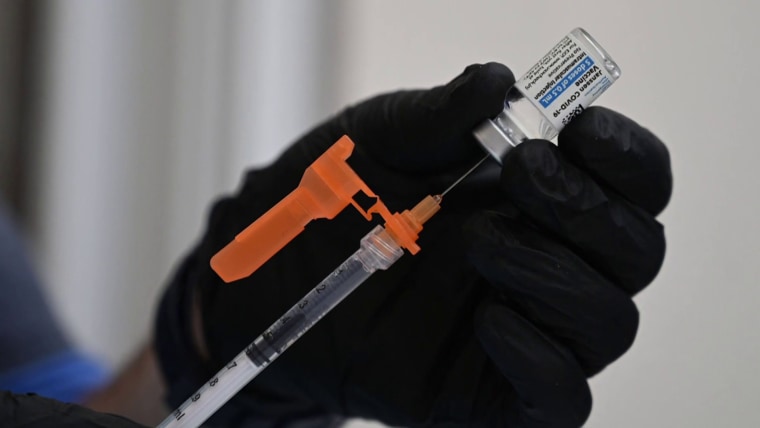 The Pentagon is “preparing a written response” to the request by Oklahoma’s governor that his state’s National Guard be exempt from the Defense Department mandate that all military personnel be vaccinated for Covid, according to Pentagon spokesman John Kirby.

Three senior military officials told NBC News that the Pentagon is not expected to approve the request from Gov. Kevin Stitt, a Republican who asked earlier this month that the 8,000 members of the Oklahoma National Guard be exempted.

Still at issue, however, is whether the Pentagon has the power or the means to force members of the National Guard — who take their commands from state governors in most circumstances — to get the vaccine. More than 400,000 Americans serve in the National Guard.

According to two U.S. military officials, the military is concerned other governors could follow Oklahoma’s lead and exempt their Guard members from the vaccine mandate. “We know other states are watching what happens with Oklahoma,” one official said.

Kirby said Wednesday he is not aware of any other states reaching out to the Pentagon with requests for vaccine exemptions. “If there’s a snowball effect, we haven’t seen it yet.”

Eugene Fidell, who teaches military law at NYU Law School, said he is also concerned by the potential impact of Gov. Stitt’s actions.

“This is a political grenade rolling around the kitchen floor and we don’t know where it’s going to stop,” Fidell said. “This is a very ill-advised initiative by the governor of Oklahoma.”

In August, Austin ordered “all members of the Armed Forces under DoD authority on active duty or in the Ready Reserve, including the National Guard” to get vaccinated.

Earlier this month Stitt sent a letter to the Pentagon asking Defense Secretary Lloyd Austin not to enforce the mandate on the Oklahoma Army and Air National Guard.

“It is irresponsible for the federal government to place mandatory vaccine obligations on Oklahoma national guardsmen which could potentially limit the number of individuals that I can call upon to assist the state during an emergency,” Stitt wrote.

Stitt then fired the existing commander of the Oklahoma National Guard and appointed Army Brig. Gen. Thomas Mancino as the new commander. He ordered Mancino to create a policy allowing members of the Guard to decline vaccination. Mancino complied and announced he would not enforce the Covid vaccine mandate, unleashing a legal back and forth about who has authority over state National Guard members.

Congress established a dual structure for the National Guard, under which members of the Guard answer to both the president and to their state’s governor.

When the Guard is training, it is serving under Title 32 of the federal U.S. code, but it is state-controlled and members take orders from their governor.

On state active duty — for example, when responding to tornadoes or wildfires — the Guard still takes orders from the governor.

When activated by the president, however, the Guard serves under Title 10 of the U.S. code and takes orders from the president and federal government. Examples would include overseas training or military service, as in Iraq and Afghanistan.

National Guard members thus spend most of their time on state duty, answering to the governor.

On Saturday, Mancino said that Gov. Stitt and his chain of command are the only people who can give Oklahoma Guard members a “lawful” order while on state duty.

“If you [Oklahoma Guard members] are not mobilized on Title 10 orders, the only entity that can give you a ‘lawful’ order — that is an order backed by the authority of law — is the governor and his designated state chain of command,” Mancino said. “This is easily seen by the fact that the [Universal Code of Military Justice] does not apply to you in Title 32 status. Instead, you are governed by the Oklahoma Code of Military Justice (OCMJ).”

Mancino said he would carry out the federal mandate if the Oklahoma National Guard is placed on Title 10 federal duty.

Pentagon spokesperson Kirby asserted Wednesday, however, that Secretary Austin has the authority to enforce the Covid vaccine mandate among members of the National Guard even if they are not on Title 10 federal duty status.

“The Secretary of Defense, as well as the service secretaries, have the authorities to establish readiness requirements for all members of the Department of Defense and that includes the National Guard in a Title 32 status,” Kirby said during a Pentagon briefing. “So the Secretary has the authorities he needs to require this vaccine across the force, including the National Guard.”

Military law expert Fidell, however, says Mancino is correct that Oklahoma National Guard members are not subject to the Universal Code of Military Justice when not on Title 10 federal duty, and therefore the federal government’s powers to enforce the vaccine mandate are constrained.

The Pentagon could put the entire Oklahoma National Guard on Title 10 duty and enforce the mandate, said Fidell. “In theory you could federalize the National Guard,” Fidell said, “but the cost to the taxpayers would be considerable.”

Another option, said Fidell, would be for the Pentagon to punish the individual Guard members for obeying the orders issued by their state chain of command. The Pentagon would withdraw the federal recognition of the individual service members, Fidell explained, meaning they would remain in the Guard but not have the federal reservist status that they need for promotion and retirement requirements and to get paid.

On Wednesday, a senior defense official said ultimately vaccine mandates are an issue of medical readiness and those requirements are set by the Pentagon.

“Whether or not a governor enforces that under his or her own authority is another matter, but it in no way relieves members of the National Guard from compliance with medical readiness requirements established by the Secretary of Defense and the secretaries of the military departments,” the official said.

Mancino, the commander of the state Guard, said Saturday he is vaccinated and encourages all Guard members to get vaccinated.