Can regular at-home testing slow the spread of Covid? 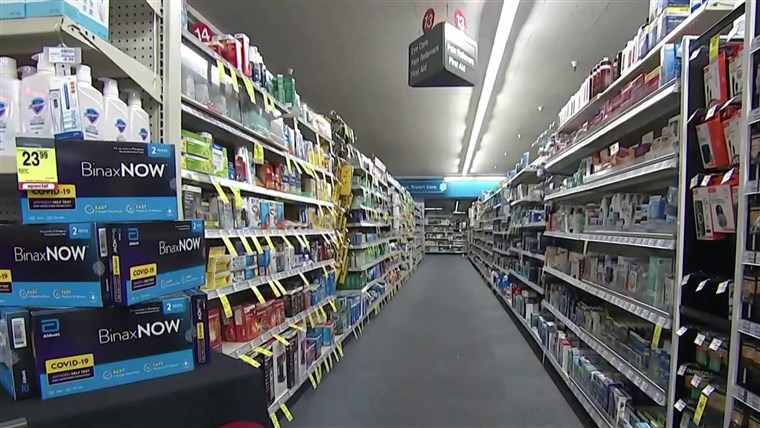 Three times a week, Rodney Coles Sr. gives himself a Covid-19 test in the privacy of his own home.

Coles, founder and CEO of the Churches Outreach Network in Greenville, North Carolina, swabs his nose, then stirs the sample into a little tube filled with a reagent. In 10 minutes, his test result is revealed on a little paper strip, similar to a pregnancy test. If a blue line appears, the test is negative. But a pink line indicates a positive finding.

“Taking this test at home, at your own convenience is easy — whether you are positive or praying that you’re negative,” he said. “But if you’re positive, you can take precautions.”

He received one of the 40,000 at-home testing kits being given out in Pitt County, North Carolina, where the Centers For Disease Control and Prevention and the National Institutes of Health launched the first public health initiative in the United States to see if frequent, at-home testing can stop the spread of the coronavirus.

“The hope of the study is to see if having testing in the home can reduce spread within family groups or cohabitating groups and thereby reduce spread into the community at large,” said Dr. John Silvernail, Pitt County’s public health director.

The program, which is simultaneously being launched in Chattanooga, Tennessee, asks participants to use the tests as a screening tool, testing themselves three times a week — frequent enough to catch an infection and begin isolating before they can spread it.

“It’s one more tool in our toolbox,” Silvernail said. “It gets these folks into isolation sooner. It gets contacts into quarantine sooner.”

Participants are not required to report their results, but CDC and NIH scientists will be watching the county’s case numbers, hospitalization rates and even examining wastewater for traces of the virus, looking for any signs that infections are declining — an indicator that the program is working.

The initiative comes as health officials across the United States struggle to get more people vaccinated and as cases continue to rise in some regions, especially in young people.

That’s what’s happening in Pitt County, where the 7-day average positivity rate just hit 7.2 percent, double from just a few weeks ago. As cases there continue to rise, vaccination rates have remained stagnant, with just 26 percent of the county’s 185,000 residents vaccinated.

“We are battling that,” Silvernail said. “As we have broadened eligibility across the state, we’ve seen some of that vaccine demand wane. You know, the forbidden fruit is always the sweetest. So, when I couldn’t have it, I wanted it. Now that I can get it, maybe I’ll wait.”

But Pitt County, like so many other regions across the U.S., faces other hurdles too. The county’s largest city, Greenville, is mainly a college town, home to East Carolina University, and the student population that seems to be driving the current rise in infections.

Outside of Greenville, the rest of the county is mostly rural, leaving residents with little access to not just vaccinations, but also testing.

“As you get outside of the city, you get rural very, very fast and very rural in many places and it’s often hard to get in from some of our outlying communities to get to health care, to get the testing, to get the vaccine,” Silvernail said.

Issues with access also extend to the county’s large communities of color, which like the rest of the U.S., were hit disproportionately hard by the pandemic.

“It’s been very hard,” said Juvencio Rocha-Peralta, executive director of the Association of Mexicans in North Carolina. “You know one of the things that we had to recognize, some people had to travel 20 miles, 30 miles to get to a public health agency. I mean that cannot be acceptable. I think Covid really highlighted the issues that we face with the Latino community in North Carolina and especially in this region.”

Rocha-Peralta and his organization have spent the last few weeks trying to get the new at-home tests to the Latino community, setting up tables at local taquerias and churches. He said the at-home tests are giving his community better access to testing.

“When we go out to the public, we explain to them what is in it and what they need to do with them and they’re very open,” he said. “So that’s the good positive thing that really we see. That now people are aware that they exist, and they can use it in their own space.”

The hope is that these tests not only solve some of the county’s issues with access, but also bridge the gap between rising cases and plateauing vaccination rates, so that future outbreaks can be stopped. If successful, NIH officials say this program could be a model for reducing transmission in other communities experiencing a surge in cases.

For Coles, every negative test result brings a sense of relief. As the CEO and founder of North Carolina’s Churches Outreach Network, he spends his days surrounded by other people, working to help the county’s homeless and hungry, and meeting with local law enforcement, health officials and politicians.

“I felt that we should have had this at the very beginning,” he said. “I pray that they’re keeping [the program]. You know, there’s an old saying, ‘Don’t leave home without an American Express Card.’ Don’t go home without a home kit.”