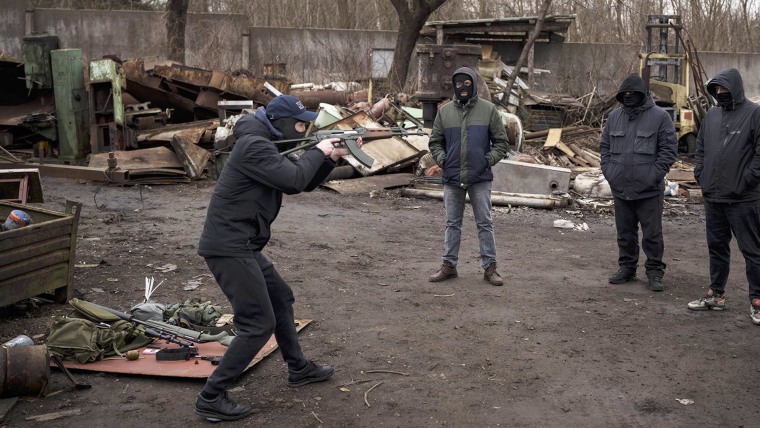 The International Organization for Migration said Friday that as many as 1.25 million people have now fled the country.

UNICEF said that around half of those fleeing are children, with around 500,000 children, including infants, forced to leave their homes behind, according to the agency’s estimates. It said the exodus was “unprecedented in scale and speed.”

Civilians who have stayed have been forced to shelter in basements and metro stations, while others have taken up arms to join the fight.

In a tweet, he urged the world not to “let Putin turn Ukraine into Syria.”

“We are ready to fight. We will continue fighting. But we need partners to help us with concrete, resolute and swift actions, now,” he said.

Western officials have warned that the darkest days of the invasion lie ahead, with Putin warning neighboring countries not to intervene in Russia’s war.

“There are no bad intentions toward our neighbors,” the Russian leader said Friday, “and I would also advise them not to escalate the situation, not to introduce any restrictions.”

Moscow says it was provoked by the West and launched the conflict to disarm Ukraine and capture leaders it calls neo-Nazis. Ukraine and its allies say that is a baseless pretext for a war to conquer the country of 44 million people Putin has made clear he sees as rightfully part of Russia.

He also said the alliance was prepared to defend “every inch” of its territory from any attack.

“Ours is a defensive alliance,” he said, as he arrived for the meeting in Brussels. “We seek no conflict, but if conflict comes to us, we’re ready for it and we will defend every inch of NATO territory.”

Ukraine is not a member of NATO. Countries within the alliance have so far sent arms to Ukraine, but have resisted engaging in any action that might bring them into direct conflict with Russia, such as establishing a no-fly zone.

But global condemnation has been allied with crippling sanctions that have sent Russia’s economy spiraling.

The Biden administration said the new sanctions would allow yachts, luxury apartments, money and other assets linked to oligarchs to be seized in a bid to increase pressure on Putin to de-escalate the situation in Ukraine.

Companies such as Ikea have shut down their operations in Russia, while the country’s stock market remained closed on Friday.

With his global isolation growing, Putin has tightened his grip domestically.

The country’s parliament passed a bill Friday introducing sentences of up to 15 years in prison for intentionally spreading “fake” information about military action.

Putin’s security services have intensified a crackdown on dissent and moved to quash any protests as well as coverage of the war that doesn’t meet the Kremlin’s strict requirements.

Russia’s communications watchdog has restricted access to the BBC Russian service as well as Voice of America, Radio Liberty and other foreign-based media outlets for spreading what it cast as false information about the conflict, the RIA state news agency reported.

The independent radio network Echo of Moscow and the television station TV Rain also said they were halting operations Thursday.

Alicia Victoria Lozano is a California-based reporter for NBC News focusing on climate change, wildfires and the changing politics of drug laws.