Year after devastating blast pulverized swaths of Beirut, city is still on its knees. 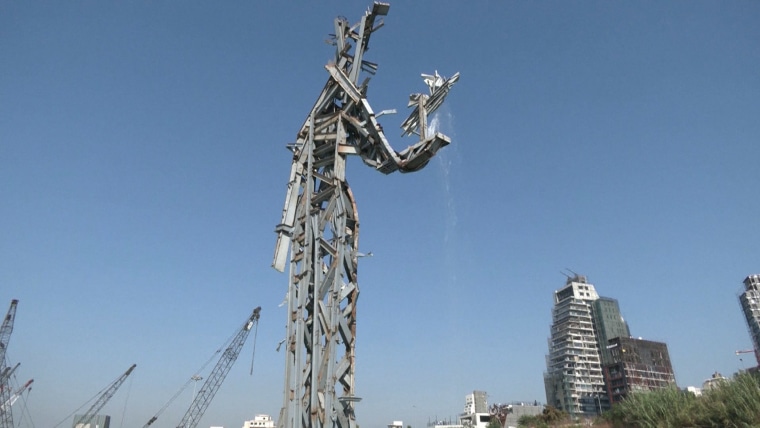 BEIRUT — A year after an explosion pulverized the port of Beirut, there are still days that Aline Kamakian has to ask herself whether she is really alive.

How could she be, her logic goes, when a year ago to the day one of the largest nonnuclear explosions in history tore through her restaurant in the capital of Lebanon —a wildly diverse city that is a melting pot of different religions, sects and nationalities.

On other days, Kamakian feels guilty: She’s alive when others are not. She can still see while her colleague was blinded by the blast.

“We are full of scars, some of them you can see and most of them you can’t,” she told NBC News from her newly refurbished Mayrig restaurant. “The one that you don’t see, it hurts a lot.”

Kamakian is among countless Beirut residents still traumatized by the blast that ripped through this ancient and cosmopolitan city’s neighborhoods, killing more than 200 people and injuring thousands.

It sucker-punched the nation of 6.8 million people when it was already on its knees under the weight of overlapping economic, political and health care crises.

Kamakian first spoke to NBC News in the aftermath of the explosion last year, when the chef Jose Andres and his U.S.-based World Central Kitchen team showed up and started churning out meals for the tens of thousands of people who had lost their homes in the blast. A year on, the team is still feeding 500 people a day, in addition to Kamakian’s paying customers.

“I believe in Lebanon, I believe in the people, otherwise I wouldn’t be here,” Kamakian said.

Twelve months after the blast, there has still been no accountability for it and a political stalemate has left the country without a functioning government.

Lebanon’s economic unraveling is so severe the World Bank has described it as one of the worst economic crises in 150 years.

A dramatic currency crash and hyperinflation have plunged more than half the population below the poverty line and 77 percent of households do not have enough food or money to buy it, according to a July 1 UNICEF report. Wealthy and middle-class families are fleeing the country in search of brighter futures.

Families of blast victims, and supporters, were set to march to the port at around 3:30 p.m. (8:30 a.m. ET) Wednesday, where the names of those who lost their lives in the blast were to be read out, and attend prayers and religious ceremonies in their memory.

“This is the moment for Lebanon,” said Kamakian, who planned on taking part in the demonstration ending at the port to commemorate the tragedy and call for justice.

“I think Lebanese people understood finally that it’s only together that we can do the change.”

She is not the only one that is hoping the anniversary will mark the beginning of Lebanon’s physical and emotional reconstruction and accountability for Lebanon’s leaders.

The blast tore through the city with such force it was felt across the country — the result of tons of ammonium nitrate igniting after a fire broke out at the port. It was a disaster that a Human Rights Watch report said happened within a context of long-standing corruption and mismanagement at the port, itself emblematic of the failures of post-war state building and political sectarianism in Lebanon.

The report released Tuesday concluded that there was strong evidence to suggest some Lebanese officials knew about and tacitly accepted the lethal risks posed by the ammonium nitrate stored at the port before the blast.

The New York-based group called on the United Nations Human Rights Council to mandate an investigation, and countries to sanction officials implicated in ongoing rights violations resulting from the explosion.

Frustration is palpable on the city’s streets.

“It’s sad to say that it’s expected because we’ve been accustomed to not getting any justice done in this country,” Ramsey Khalaf, a 34-year-old musician, said about the lack of accountability for those responsible for the blast.

“But again, what happened is so big that I think this time that people will have a hard time letting it pass without seeing actual justice,” he added. “There are way too many people being affected.”

Molly Hunter is a London-based correspondent for NBC News.