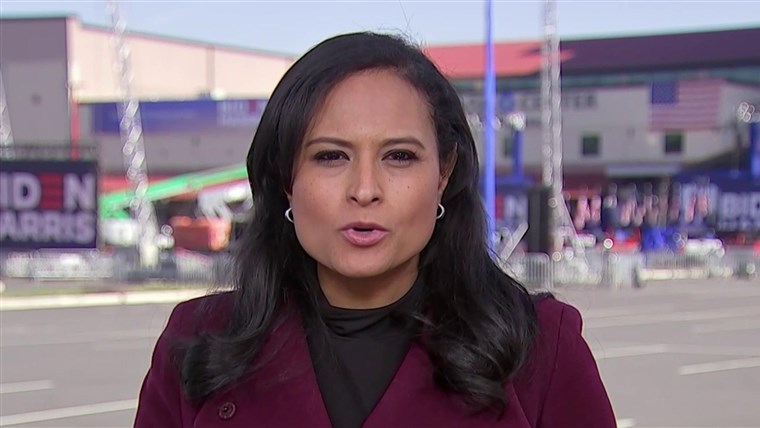 LONDON — Sighs of relief rippled through capitals of longtime U.S. allies around the world Saturday after Joe Biden became president-elect.

Many leaders have been battered by four years of the convention-smashing President Donald Trump and see in Biden a counterpart who will try and return America onto a path of multilateralism and international cooperation.

Canadian Prime Minister Justin Trudeau, who had a fraught relationship with Trump, was among the first world leaders to issue a statement congratulating Biden and his running mate, Kamala Harris.

“Our two countries are close friends, partners, and allies. We share a relationship that’s unique on the world stage,” Trudeau wrote soon after news emerged that Biden had won the pivotal state of Pennsylvania, according to NBC News projections. “I’m really looking forward to working together and building on that with you both.”

“Welcome back America!” she wrote on Twitter. “Congratulations to Joe Biden and Kamala Harris for their election!”

Messages from foreign leadersand officials are common when a new U.S. president is elected. Less common, however, is the number this time around who have been referring to the previous administration — perhaps tacitly signposting their relief that it’s over — when delivering their congratulations.

There were many mentions of the challenges the new White House faced.

Swedish Prime Minister Stefan Löfven congratulated Biden and mentioned the need for “multilateralism” — something the Trump administration has explicitly shunned.

My warmest congratulations to @JoeBiden and @KamalaHarris. Looking forward to strengthening excellent US-Swedish relations and to work jointly for multilateralism, democracy and global security. Together, we can lead a green transition creating jobs for the future.

New Zealand Prime Minster Jacinda Ardern — lauded for her response to the coronavirus pandemic and the March 2019 Christchurch mosque attacks that killed 51 people — celebrated Biden’s victory before saying there were “so many issues facing the international community.”

The Americans have chosen their President. Congratulations @JoeBiden and @KamalaHarris! We have a lot to do to overcome today’s challenges. Let’s work together!

The rush of congratulations from many Europeans made sense given Biden’s long track record as a supporter of strong trans-Atlantic ties.

“Biden will be more diplomatic toward allies across the board, but particularly toward Europeans,” Hans Kundnani, a senior research fellow focusing on Europe and trans-Atlantic relations at the U.K.-based think tank Chatham House, said before the election. “Europeans will be extremely relieved.”

Norbert Röettgen, who chairs Germany’s parliamentary foreign affairs committee, welcomed Biden but signaled that there may not be a return to the way things were before Trump.

“The E.U. must present its own proposals for the partnership,” he wrote.

“This is a moment of relief and joy,” he added. “Let’s all take a break to celebrate that decency won. I am very happy for all my American friends and for this great chance to revive our trans-Atlantic friendship.”

Relations with the European Union, NATO and, in particular, Germany were strained under Trump.

“I know Joe Biden as a strong supporter of our alliance,” NATO Secretary General Jens Stoltenberg wrote. “A strong NATO is good for both North America and Europe.”

While U.K. Prime Minister ‘s Boris Johnson also quickly issued a congratulatory message, referring to the U.S. as Britain’s “most important ally,” his message was not as enthusiastic as those of some of his counterparts.

Biden has spoken against Britain’s exit from Europe, a cause championed by Johnson, and in December he referred to Johnson as the “physical and emotional clone” of Trump, according to The Hill.

Elsewhere, not everyone may be overjoyed at the prospect of a Biden presidency.

A sense of unease is likely coursing through parts of the Middle East, where Trump’s White House has had especially close relationships with the leaders of longtime U.S. partners Saudi Arabia, the United Arab Emirates, Israel and Egypt.

“They are going to try to coexist with Biden and make the best of a bad situation from their point of view,” said Fawaz Gerges, a professor of international relations at the London School of Economics. “They put most of their eggs in Trump’s basket — he’s been good to them.”

Russian President Vladimir Putin has said Moscow will work with any U.S. leader, but Biden’s win will be a net negative for Russia, Vladimir Frolov, a Moscow-based political analyst, said before the election.

“Moscow is paying close attention to this and does not like what it sees,” Frolov said.