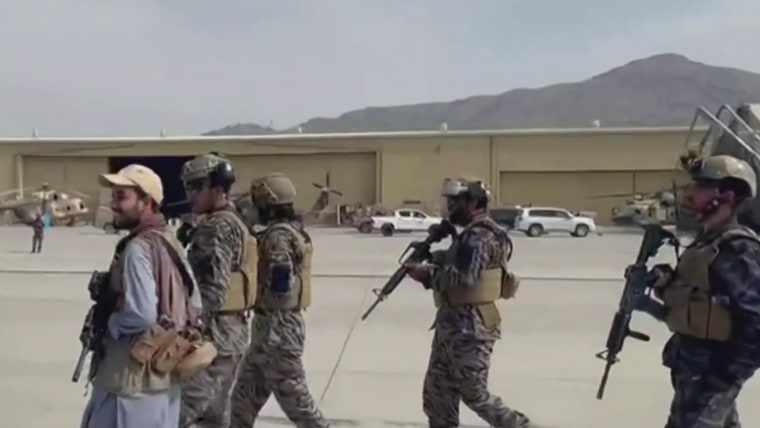 The U.S. plans to send at least two Afghan evacuees back out of the country to Kosovo because of security concerns raised after they arrived at a U.S. airport, said two sources familiar with the U.S. evacuation.

The Afghans will undergo a further review in Kosovo.

The sources caution, however, that federal officials are acting out of abundance of caution, and just because a person is flagged does not mean they are a terrorist or pose a threat. Something in their profile — their name, background or a number in their cellphone — raised enough concern that they could not be permitted to stay in the U.S. pending additional review, according to the sources.

“A lot of people were moved very quickly and the intelligence community has been working hard to evaluate whether any of them pose a threat,” said a senior federal law enforcement official. “Some of the vetting occurs while they are overseas, and some of it occurs here … We are not going to allow people to intentionally be released into the community if they have unresolved derogatory information.”

Any other evacuees who trigger similar concerns will also be sent to Kosovo, said the sources.

Of more than 30,000 evacuees from Afghanistan to the U.S., about 10,000 needed additional screening as of Friday, said the sources, and of those about 100 were flagged for possible ties to the Taliban or terror groups. Two of those 100 raised enough concern for additional review.

Other evacuees who are currently being evaluated in the D.C. area were found to have been deported from the U.S. previously for past criminal offenses, said two sources briefed on the data. The Department of Homeland Security is now deciding what to do with the individuals.

In a statement, a DHS spokesperson said, “The federal government has established a robust and multi-layered screening and vetting process with dual goals of protecting the homeland and providing protections for vulnerable Afghans.”

In addition, U.S. officials are trying to arrange placement for unaccompanied minors, with up to 10 Afghans under the age of 18 arriving in the U.S. per day. DHS Secretary Alejandro Mayorkas said Friday that Afghan children arriving in the U.S. unaccompanied would be sheltered by Health and Human Services while the agency finds a permanent home with a relative or sponsor.

Evacuees have been subject to screening while waiting on planes on the tarmac in Kabul to leave Afghanistan, before deplaning in the U.S., and also in third countries while in route to the U.S. Third countries where evacuees were vetted include Qatar, Bahrain, Kuwait, Italy, Spain, and Germany, among others.

“If and when we obtain derogatory information, we know how to address that. Those muscles are very well exercised,” Mayorkas told reporters at a press briefing Friday.

As NBC News previously reported, Mayorkas said Friday that some evacuees whose names were on terror watchlists were prevented from entering the U.S.

“We are working with our international allies to address the disposition of those individuals,” Mayorkas said.

The appearance of a name on a terror watchlist does not necessarily mean that an individual poses a threat.

Jonathan Dienst is a reporter for WNBC-TV in New York, leading its investigative reporting team and covering justice and law enforcement issues.