They’re rioting against government failure. In the process, millions are going hungry. 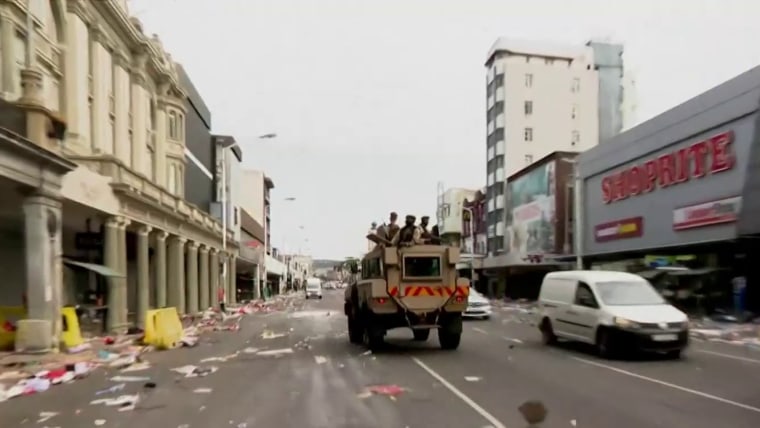 DURBAN, South Africa — South Africa was already beset by rampant poverty. The pandemic exacerbated the struggle for many of the country’s poorest. Now weeks of riots have left stores torched, shelves empty and many hungry.

President Cyril Ramaphosa has reassured the country that “immediate food relief” was being distributed in the wake of deadly unrest that saw access to food disrupted after trucks, warehouses and shops were burned and pillaged.

But in towns around Durban, the hard-hit capital of the KwaZulu-Natal province, that relief wasn’t to be found.

As he stood at the end of a road in a pristine beach town on Sunday, Bilai told NBC News he felt close to tears as he watched a group of volunteers from a restaurant chain load up his car with food.

“I’ve had old women come and knock on my door and they fall down and they say they are hungry,” Bilai said. “This is a lifeline for someone. Tonight someone will go home and eat.”

The riots began as demonstrations over the arrest of the country’s former president Jacob Zuma, who faces a swath of corruption charges related to a 1990s arms deal and an inquiry into corruption during a nine-year tenure that ended in 2018.

His reign cost the country’s economy more than an estimated $35 billion — about a tenth of the overall gross domestic product — if not double that, Ramaphosa said at the Financial Times Africa Summit in London in 2019.

In that time, an additional 3 million South Africans slipped below the poverty line, according to government data. It means the poor account for more than half of the country’s 58 million people.

Hunger and malnourishment rates have also nearly doubled. The 1.8 million people without enough food in 2008 increased to 3.8 million by 2020, according to the United Nations’ Food and Agriculture Organization. Nearly a quarter of children are stunted — falling behind in physical growth and mental development because of inadequate nutrition.

“The picture was bleak to start with,” said Lise Korsten, co-director of the Centre of Excellence in Food Security at the University of Pretoria.

Blaming the poor for the recent unrest would be unfair, Korsten said. But it’s easy to see how people in desperate circumstances could be manipulated to act out for political or criminal purposes. “A hungry adult is an angry adult,” she said.

Like those who suffered the most from funds siphoned from government coffers, it was the poorest without stocked pantries and reliable vehicles who struggled in the aftermath of this month’s riots.

“If things are like this, we can’t get to the shops, we can’t get to the malls. It’s really sad for the country,” said a 29-year-old woman in a town north of Durban, while receiving privately donated formula, bread and diapers. She asked to remain anonymous out of fear she could be targeted in the event of another round of unrest.

Carrying her 2-year-old son, she said she relies on a child benefit grant that amounts to just over $30 a month per child to survive. “This thing of unemployment, it’s spreading each and every day,” she said.

The situation for many has been exacerbated not just by the riots but by the pandemic that has shuttered businesses amid lockdowns and killed tourism.

The government established a temporary grant in response, which ended this year. It was not available to everyone and, at barely $25 a month, many still struggled.

In the absence of sufficient help from the state, Korsten said businesses filled the void to ensure that food that couldn’t be exported because ports were closed was redistributed throughout the country. “But that’s not the long-term solution we need,” she said.

Instead, Korsten envisions a culture of home and community gardens, and even community kitchens, that would help ensure that people aren’t just being fed basic grains and sugar to fill their stomachs but eating healthily.

Until the government launches such programming, individual South Africans are taking the lead.

When Nonhlanhla Joye was diagnosed with cancer in 2014, she could no longer work and had no other source of income or aid. Desperate, she took inspiration from her farming parents and began to plant her own garden in sacks of soil, she said.

It worked. With an abundance of vegetables, she started to sell produce and realized the power a simple garden could offer a household. “I made it a mission in my life, to actually teach people to grow their own food,” Joye said.

She formed the cooperative Umgibe Farming Organics, and it has since expanded around KwaZulu Natal, employing hundreds of both young people and grandmothers and feeding thousands.

While the pandemic and riots disrupted production, she said the cooperative pushed ahead as they saw the need for food escalate. It’s also given her hope by putting the realities of inequality in the spotlight.

“What has just happened should be a lesson,” she said. “We should be asking ourselves what lesson were we meant to learn from … this food security issue in this country.”