They found love in Hong Kong. Now, its fate may force their family to break apart.

Home WORLD NEWS They found love in Hong Kong. Now, its fate may force their family to break apart. 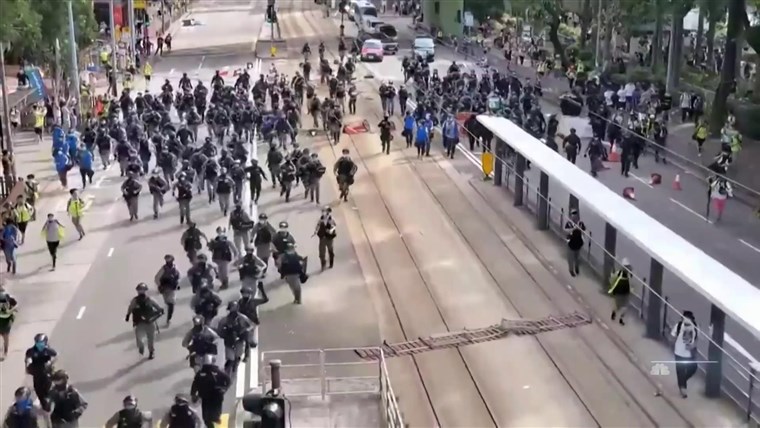 Fearing punishment for being interviewed about politically sensitive issues, the subjects in this story spoke to NBC News on the condition that their full identities not be revealed, so only their middle names are being used.

HONG KONG — Like love stories the world over, theirs began with a chance meeting.

Spotting someone she thought was a familiar figure on a motorcycle near her house in Hong Kong, Ying waved the person over for a chat. When the man took off his helmet, she realized it wasn’t her friend. But the two started chatting, and an embarrassing mistake morphed into a delightful surprise.

Over the course of days and weeks, Ying learned that the man, Chung, was kind. She liked that he tried to warn older people in their village about potential scam artists. Chung, whose quiet intensity contrasts with Ying’s effervescence, was drawn to her creativity.

Now, 10 years later, Ying and Chung share an apartment with Sum, their 9-year-old daughter, a gray parrot, a white cat and a palm-size hamster. But despite the memories, creatures and commitments binding them, their marriage is being torn apart by the same forces that are dividing Hong Kong.

Ying, 46, has had enough: She is determined to leave and take her family with her.

Since June 2019, she has participated in almost every large-scale anti-government demonstration to paralyze the city. On the other hand, Chung, 49, considers protesting against the Hong Kong and Chinese governments a “betrayal.”

Holding a cup of black coffee, she speaks in the living room of the couple’s 400-square-foot apartment in one of the busiest districts in Hong Kong. Her frustration is palpable, and she returns to the subject over and over.

“He is a former police officer, so he refused to point the finger at them,” she says, referring to the charges of brutality that have followed the police’s handling of demonstrators. What happens to the family next has everything to do with politics.

Beijing has recently tightened its grip on Hong Kong, a former British colony that became part of China again in 1997 in an agreement that promised that it could keep its unique freedoms for 50 years. But since 2019, massive anti-government protests have paralyzed the territory, and in July, a highly contentious national security law was implemented, allowing Beijing to imprison those it deems subversive and seditious.

The issue has become fodder for the geopolitical struggle between the United States and China, with Washington repeatedly taking Beijing to task for its treatment of protesters.

The pro-democracy movement has witnessed frequent clashes between the police and protesters. Demonstrators have hurled Molotov cocktails and vandalized metro stations, while the police have responded by shooting tear gas, rubber-coated bullets and even live rounds at times.

On Nov. 11, almost all of its pro-democracy lawmakers resigned in protest after the mainland deemed four of them threats to national security. That triggered the mass resignations of the opposition bloc, effectively creating a rubber-stamp legislature. The U.S. followed up by imposing sanctions on leading figures in Hong Kong’s government and related Chinese government departments.

At first, the conflict made Ying even more determined to fight for the territory’s dying freedoms. Meanwhile, Chung’s allegiance to China remains strong.

Chung, who is now an engineer, is less voluble than his wife and generally reluctant to share his thoughts out of fear that they will provoke one of their frequent arguments.

Neither talks about these sensitive issues when the other is in the room, but when Ying briefly steps away, he speaks.

“Democracy is not real — can you tell me which country in the world could actually realize true democracy?” Chung says. “Every system has its pros and cons, so I don’t see how other governments are better than the ones in Hong Kong or China.”

“I am a Chinese Hong Konger, and we should be under Chinese rules,” he says. “Hong Kong is like the son of China.”

Chung weaves in another argument for why it is better to obey the authorities, regardless of people’s individual opinions.

“If God allows someone to manage a city or country and he or she makes mistakes, God will have his judgment,” he says. “I dare not become someone to judge the manager, because I am not God.”

Having said his piece, Chung leaves to practice the saxophone. Soon, peaceful music fills the apartment.

Ying returns, plops down on the dining room chair and talks about her love for Hong Kong and China and why it motivated her to join millions in protest.

“We love it and want to improve the system, so we criticize it,” she says.

Ying, a successful entrepreneur, has been to multiple demonstrations, as well as court hearings, to show support for arrested protesters. But it wasn’t too long ago that she was on the other side of the political spectrum.

“In 2014, I was on the same page with my husband and blamed the pro-democracy protesters for creating chaos,” she says.

But that year, the so-called umbrella movement triggered many discussions with her younger cousins. And that opened her eyes, she says.

Ying tells how, during a 2019 protest on Hong Kong Island, she helped a young female protester evade police inspection at a clash by holding her hand and pretending they hadn’t been at the demonstration. It helped that people Ying’s age generally tend to be pro-Beijing, or at least politically apathetic, she says.

“I could feel her sweat in her palm and how she was shaking a little,” she says. “I knew I had to protect her.”

While she still supports the protesters, Ying has started to despair, and recently she decided to put the family’s apartment up for sale and leave Hong Kong — probably for the United Kingdom.

“The city isn’t what it used to be — our values are being taken away by the mainland bit by bit. Hong Kong now is not the Hong Kong of the past, especially in terms of the rule of law and our legal system,” she says.

She is most concerned about her daughter’s education. In October, a schoolteacher was deregistered on the grounds of professional misconduct after he was found using teaching materials that involved pro-independence activists, which fueled her fears.

“I want her to have critical thinking,” Ying says of Sum. “I brought her to protests sometimes so she can decide for herself what’s right and wrong.”

And that sort of “critical thinking” isn’t encouraged in the new Hong Kong, she says.

“If she stays here, she either becomes very frustrated in a pro-China environment or she will be brainwashed by schools to be blindly patriotic,” Ying says. “She won’t be happy either way.”

While he doesn’t agree with his wife on politics, Chung says he’s willing to give up everything to seek a better education for Sum. After all, the family comes first, he says.

“We are a family, and we are going to stick together, no matter what,” he says.

Later, Ying says her husband hopes they will stop fighting over politics after they move.

Asked where the family is looking to go, a bubbly Sum yells from her room, “The U.K., of course!”

The U.K. is, indeed, among their top choices for emigration, as they have some relatives in the country. The family, along with about 350,000 other Hong Kongers, have British national overseas passports, which enable holders a path to British citizenship by allowing them to reside in the U.K. for five years with the ability to work or study. The U.K. has had a huge surge in applications for the passports, feeding fears of a mass migration from its former territory.

But even as Ying and Chung make plans to leave as soon as possible, potentially next year, she remains torn.

“If it weren’t for Sum, I would want to stay,” she said. “I am not sure I can really abandon the young people who fight so hard for their future.”