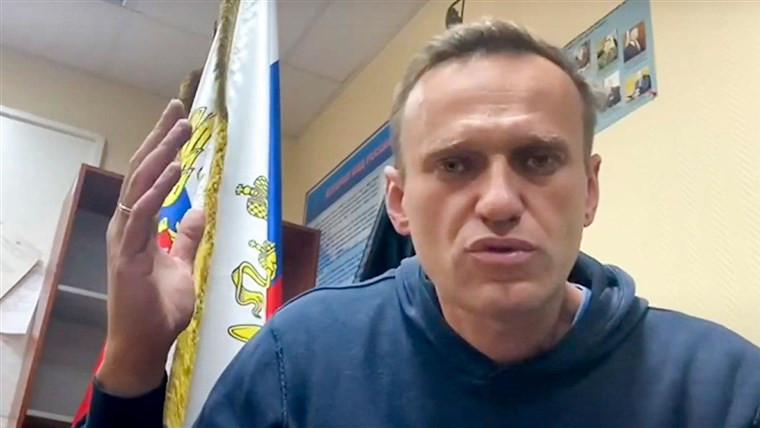 MOSCOW — Russian opposition leader Alexei Navalny’s return to his homeland Sunday was, from the very start, meant to be a symbolic act of defiance.

He was arrested on arrival and now sits in Moscow’s most notorious detention facility awaiting a trial that could see him jailed for years, under guard by the same regime he says tried to kill him with a Soviet-era nerve agent.

When Navalny announced he would finally return to Russia, after recovering from Novichok poisoning in a German hospital, it begged the question: why? The Kremlin had made it clear for months it did not want President Vladimir Putin’s most outspoken opponent to return, and was willing to play dirty to discourage it

In the days since Navalny’s return, it appears he’s returned for what could be his final fight.

“They are afraid,” he said in a video recorded from a makeshift courtroom outside Moscow on Monday, where he was sentenced to 30 days pretrial detention.

When Navalny left Russia in August on a German air ambulance, he clung to life in a medically induced coma. Scientists in multiple countries determined that he was poisoned, and nearly killed, with Novichok, a variant of Soviet-made nerve agents — the same type of chemical weapon used against former Russian spy Sergei Skripal in the United Kingdom in 2018.

To Navalny’s supporters, it was immediately obvious who tried to kill him: Russia’s Federal Security Service. After all, they argued, who else could get their hands on such a weapon? When Navalny, under the care of German specialists, awoke from his coma weeks later, he was unequivocal in placing blame directly on Putin. The Russian government has denied any involvement.

Navalny’s national campaign is organizing protests Saturday across the country in support of the jailed opposition icon. On Feb. 2, he will appear in court, where a judge will consider the state’s request to turn a suspended sentence into hard time served. If this happens, he faces imprisonment of up to three and a half years under the current charges. Protests, his allies say, are his only hope.

This was already a high-stakes situation by the standards of Russia’s stifled, heavily controlled domestic politics. But Navalny dramatically raised the stakes Tuesday night. In a move that can only be interpreted as him going all in on an epic, final confrontation with Putin: his team released one of the largest investigations into Putin’s wealth.

In the introduction to the two-hour video detailing his team’s investigation into the financing behind “Putin’s palace,” Navalny tells viewers that his team decided to move forward with the investigation when he was still in intensive care, and immediately agreed that they would release it when he returned home to Moscow, “because we do not want the main character of this film to think we are afraid of him.”

The report details Putin’s rise to wealth and power and the construction of the massive $1.4 billion palace on the Black Sea coast. NBC News has not independently confirmed the report’s findings.

Though Navalny says he decided to pursue this investigation after waking from his coma, the scope of the effort and the nature of the material presented suggests that this is the culmination of years of work, following a decade of smaller-scale investigations into the figures who surround Putin. Until now, Navalny has never taken such direct shots at the leader.

In 48 hours since going on YouTube, it has been viewed 38 million times and was the No. 1 trending video in Russia. Yet, the question remains: Is it enough to inspire a large-scale show of support Feb. 2 when he goes to trial?

If not, and even with the prospect of possible international sanctions over the issue, the Kremlin may see the cost of jailing Navalny as entirely affordable.