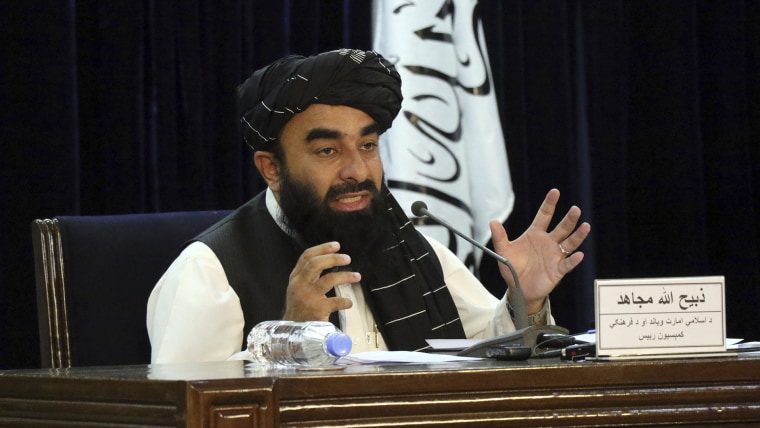 Twenty years after being ousted by American forces, the Taliban on Tuesday unveiled an interim government dominated by the militant group’s old guard.

As the group consolidated its hold on the country after the U.S. withdrawal, Taliban spokesman Zabihullah Mujahid announced at a news conference that Hassan Akhund had been appointed acting prime minister. Akhund headed the Taliban government in Kabul during the last years of its previous rule, The Associated Press reported.

One of the founding members of the Taliban and its political leader, Abdul Ghani Baradar, was named acting deputy prime minister.

Baradar was arrested more than a decade ago in a joint U.S.-Pakistani operation before being released in 2018. He served as chief negotiator for the group during peace talks with the U.S. in Qatar and recently held a secret meeting with CIA chief William Burns.

Sirajuddin Haqqani, leader of the powerful Haqqani network, which the U.S. considers a terrorist organization, was named acting interior minister. Mohammad Yaqoob, son of Mullah Omar, the one-eyed cleric who founded the Taliban and died in 2013, was appointed acting defense minister.

The timing of the announcement was striking, coming almost 20 years to the day after 9/11, which precipitated the American invasion after the Taliban government refused to hand over the attacks’ architect, Al Qaeda leader Osama bin Laden.

Mujahid said the declaration of the interim government is not final as these are acting positions. The rest of the government posts will be announced at a later date, he said, without specifying.

There were no non-Taliban figures immediately announced — an indication that the militants had not bowed to domestic and international pressure to create an inclusive regime.

The group has been tightening its hold on Afghanistan, and this week declared it was in control of Panjshir province, the last holdout of anti-Taliban forces in the country after their sweep of Afghanistan last month. Their claims were refuted by the resistance forces that said they were still fighting the militants in the area.

Ahmad Massoud, the son of an iconic anti-Taliban fighter, posted a defiant audio message to social media, calling for a national “uprising” against the Taliban.

NBC News was not able to confirm any of the claims.

Earlier in the Afghan capital of Kabul, Taliban gunmen fired in the air to scatter protesters, witnesses told Reuters, as video showed scores of people scurrying to escape volleys of gunfire. There were no immediate reports of injuries.

Hundreds of men and women shouting slogans such as “Long live the resistance” demonstrated against the Taliban, the news agency reported. Video posted on social media also appeared to show men and women taking to the streets of Kabul.

The Associated Press also reported that the Taliban fired their weapons into the air and arrested several journalists covering the demonstration.

The Taliban may be forming a government, but the U.S. for one is not in a hurry to establish official ties.

Asked whether the U.S. would recognize the Taliban, President Joe Biden told reporters at the White House late Monday, “That’s a long way off.”

Secretary of State Antony Blinken said Tuesday there were still around 100 U.S. citizens left in Afghanistan who wanted to leave after the last U.S. plane departed last week ending America’s 20-year presence in the country. Blinked added that the State Department was working with the Taliban to facilitate chartered flights to get people out.

U.S. rivals Russia, China and Iran, among others, have established relations with the Taliban leaders, and are expected to forge ties with the new government of Afghanistan.

Before completing its withdrawal, the U.S. said it had evacuated about 124,000 U.S. citizens and at-risk Afghans, but thousands were left behind.

Speaking at a news conference in Qatar — where many of the evacuees went — Blinken said that the Taliban had reasserted that U.S. and Afghan citizens with valid papers would be allowed to freely leave.

“They have said they will let people with travel documents depart,” he said. “We will hold them to that.”