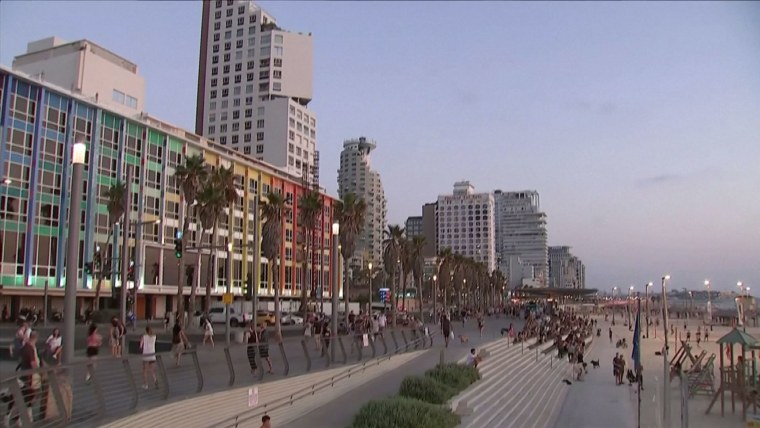 TEL AVIV — A cease-fire took effect at 11:30 p.m. local time Sunday after two days of fighting that led to the deaths of more than two dozen people, including leaders of the Palestinian Islamic Jihad group.

The announcement by the Israeli government thanked Egypt for its efforts to broker the cease-fire. It was accompanied by a warning that “if the ceasefire is violated, the State of Israel maintains the right to respond strongly.”

“We will not allow any disruption to the lives of the citizens of the State of Israel,” the statement said.

Khaled Mansour was killed in an airstrike in southern Gaza late Saturday, the Israeli Defense Forces, or IDF, said in a statement Sunday. It added that two other operatives, including Mansour’s deputy, were also killed.

The Al-Quds Brigades, the armed wing of the Iran-backed Islamic Jihad group, later confirmed his death in a statement, saying it would “ignite the battle to defend Jerusalem.” The statement also said two more of its members, Ziyad Ahmad al-Mudallal and Raafat Saleh Sheikh al-Eid, had also been killed.

It was Israel’s second such targeted attack since it launched its high-stakes military offensive against the militant group Friday. Taiseer al-Jabari, the senior commanding officer of Islamic Jihad’s northern Gaza division, was also killed Friday, both Israel and the militant group confirmed.

Five civilians were also killed Sunday, bringing the death toll to 31 since the start of the offensive on Friday, the Palestinian Health Ministry said in a statement Sunday.

Six children and four women were among the dead, it said, adding that more than 250 people had been wounded.

The IDF said in a statement Saturday that a rocket fired from Gaza was responsible for the deaths of at least four children after it hit a Palestinian home in the Jebaliya refugee camp, where the Health Ministry said six people were killed.

Israeli Prime Minister Yair Lapid said in a statement Sunday that the operation would continue “as long as necessary,” adding that his military was acting in a “precise and responsible way,” with minimal harm to civilians.

Some see the latest round of violence as a litmus test for Lapid, who took on the role of caretaker prime minister in June after the eight-party coalition of his predecessor, Naftali Bennett, collapsed. The next elections are scheduled for November.

In a separate news release Sunday, the IDF said more than 97% of the rockets that have been launched have been shot down by the Iron Dome Aerial Defense System.

So far, Hamas, which rules Gaza, has appeared to be staying on the sidelines. But it did pay tribute to Mansour in a statement Sunday, describing him and the other dead Islamic Jihad members as “martyrs.”

Hamas is larger than the Islamic Jihad, and the groups share many key demands and ideologies, including a refusal to acknowledge the existence of the state of Israel.

Israel and Hamas have fought four wars and several smaller battles over the past 15 years. Hamas has a strong incentive to avoid another war, as last year’s conflict exacted a staggering toll on the impoverished territory’s 2.3 million Palestinian residents.

Since the last war, Israel and Hamas have reached a tacit understanding based on trading calm for work permits and a slight easing of the border blockade Israel and Egypt imposed when Hamas overran the territory 15 years ago.

U.S. Defense Secretary Lloyd Austin, in a call with Israeli Defense Minister Benjamin Gantz on Saturday, reiterated U.S. support for Israel and its right to defend itself while urging de-escalation steps. He also said he was concerned about reports of civilian deaths and called for “a timely and thorough” investigation.