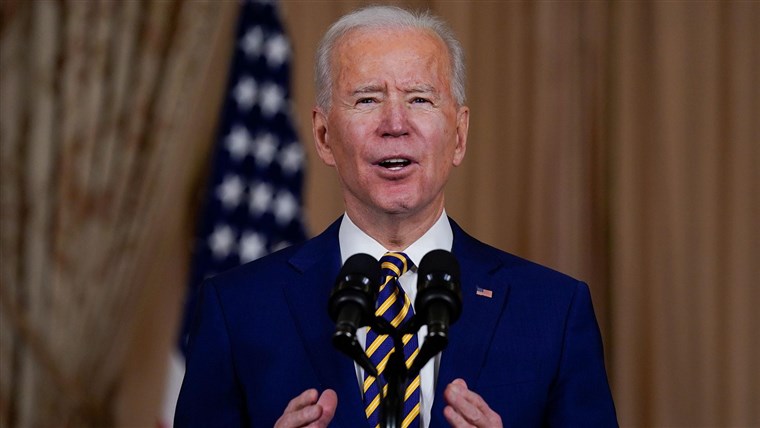 WASHINGTON — President Joe Biden criticized Russia in his first visit to the State Department on Thursday, part of the new leader’s effort to reverse the foreign policy posture of his predecessor.

“I made it clear to President Putin in a manner very different from my predecessor that the days of the United States rolling over in the face of Russia’s aggressive actions — interfering with our elections, cyber attacks, poisoning its citizens — are over. We will not hesitate to the raise the cost on Russia and defend our vital interest and our people,” Biden said.

Former President Donald Trump was reluctant throughout his term to publicly speak out against Vladimir Putin. Trump suggested in 2018 that he believed Putin over American intelligence when the Russian president denied that he meddled in the 2016 election, he refused to condemn the poisoning of Russian opposition leader Alexei Navalny and was quiet on Russia’s hacking of U.S. government agencies last year. Trump’s ties to Russia were also the subject of special counsel Robert Mueller’s probe.

“The politically motivated jailing of Alexei Navalny and the Russian efforts to suppress freedom of expression and peaceful assembly are a matter of deep concern to us and the international community,” Biden said, adding that Navalny had been “targeted” for exposing corruption and should be “released immediately and without condition.”

In addition to signaling a new approach towards Russia, Biden announced a number of steps he will take to unwind Trump’s foreign policy, which rested on an “America First” approach to interacting with the world.

Biden said he will order an end to American support for offensive operations in Yemen, calling the war a “humanitarian and strategic catastrophe,” and will order a freeze on the withdrawal of U.S. troops from Germany initiated by Trump.

Biden said he will also sign an executive order to restore the refugee admission program which was drastically cut under Trump, with the goal of approving 125,000 refugees in the first full fiscal year of his presidency, and he will issue a memorandum protecting the rights of LGBTQ individuals around the world.

Trump vetoed a bipartisan resolution in 2019 calling on the U.S. to end involvement in Yemen. Trump’s decision was largely seen as an effort to side with Saudi Arabia, who the former president courted to purchase U.S. weapons.

Biden stressed the importance of officials in the foreign and civil service, signaling another break from Trump who frequently criticized career officials as part of the “deep state” and threatened to cut the department’s budget. Trump’s first secretary, Rex Tillerson, was seen as dismantling the agency and hollowing out the ranks of career employees and the department’s civilian workforce shrank under Trump’s administration.

“I want the people who work in this building and in our embassies and consulates around the world to know that I value your expertise, and I respect you,” Biden said. “I will have your back. This administration is going to empower you to do your jobs, not target or politicize you.”

National Security Advisor Jake Sullivan told reporters ahead of Biden’s visit that it was “not an accident that he has chosen the State Department as the venue for these first remarks,” adding that Biden “wants to send a clear message that our national security strategy will lead with diplomacy.”

In his speech, Biden said that he has already been in touch with many world leaders to “begin re-forming the habits of cooperation and rebuilding the muscles of democratic alliances that have atrophied from four years of neglect and abuse.”

Thursday’s actions build off a number of foreign policy moves Biden has taken in his first two weeks in office. He rejoined the Paris Climate Accords and the World Health Organization, ended a ban on U.S. entry from majority-Muslim countries and extended a crucial nuclear arms control treaty with Russia until 2026.

Biden’s speech comes as he is already confronting new international crises in just his first two weeks in office: the imprisonment of Navalny and a military coup in Myanmar.

“There can be no doubt: In a democracy, force should never seek to overrule the will of the people or attempt to erase the outcome of a credible election. The Burmese military should relinquish power,” Biden said.

Biden also referenced the Jan. 6th insurrection at the U.S. Capitol that targeted American democracy, saying that the nation’s values were “pushed to the brink in the last few weeks” but that “the American people will emerge from this stronger, more determined, and better equipped to unite the world in fighting to defend democracy – because we have fought for it ourselves.”

White House press secretary Jen Psaki has said that there are no foreign trips in the works as of now and many global meetings with world leaders are expected to be virtual this year due to the coronavirus pandemic.