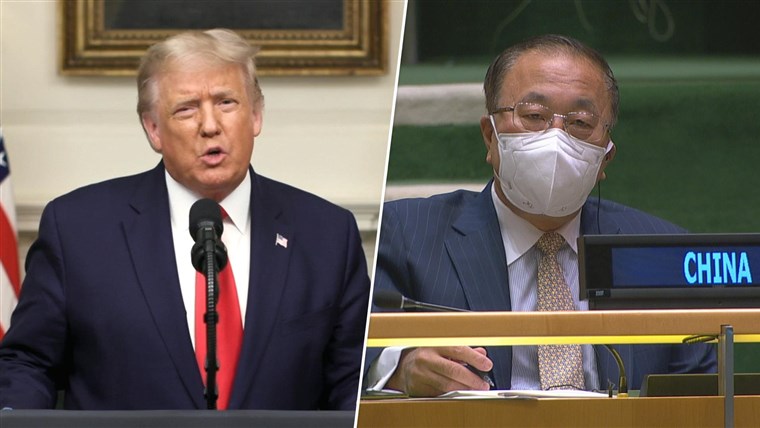 Secretary of State Mike Pompeo met with some of Washington’s closest Asian allies on Tuesday in Tokyo, as Washington drives to build support for its tough line on Beijing among China’s neighbors.

The foreign ministers of the United States, Japan, Australia and India — known as the “Quad” alliance — last met in New York in 2019.

“As partners in this Quad, it is more critical now than ever that we collaborate to protect our people and partners from the CCP’s exploitation, corruption and coercion,” Pompeo told reporters in Tokyo, referring to the ruling Chinese Communist Party.

“America stands with each of you,” added Pompeo, a longtime critic of Beijing.

China has previously denounced the grouping as an attempt to contain its development, and last week warned against “exclusive cliques.”

“We hope the relevant countries can think more of the regional countries’ common interests and contribute to regional peace, stability and development rather than doing the opposite,” China’s Foreign Ministry spokesman Wang Wenbin said in a statement.

Some of China’s neighbors have grown nervous of the country’s growing ambitions under President Xi Jinping.

Japan is wary of Chinese incursions around East China Sea islands controlled by Tokyo but claimed by Beijing. While India had deadly clashes with China along its contested Himalayan border earlier this year, as tensions rise in the region.

Pompeo’s Asia trip, which was supposed to include stops in Mongolia and South Korea, was cut short after President Donald Trump was diagnosed with Covid-19 last week. But comes as ties between the U.S. and strategic rival China are at their most strained in decades.

The world’s two biggest economies have clashed on issues from Hong Kong’s autonomy, to China’s ambitions in the South China Sea and human rights abuses of its Uighur Muslim minority. Most recently, during a trip to the Vatican, Pompeo spoke of the Catholic Church’s role in protecting religious freedoms in China.

Trump, who last month told the United Nations that China had “unleashed” the coronavirus “plague” that has killed more than a million people around the world, has made a hard line against Beijing a central part of his Nov. 3 reelection bid.

Meanwhile Pompeo has led a rhetorical assault on China’s handling of the pandemic. On Tuesday he told Japan’s NHK broadcaster that he was “confident that these four countries will be real leaders in pushing back against the Chinese model for how to respond to this virus,” he said, calling out China for trying to “deceive the world ” — claims China vehemently denies.

The Quad meeting is unlikely to yield a specific action plan, although the gathering itself will likely irk Chinese officials and play to fears that the network could one day grow into a formalized structure like the NATO alliance — established to counter threats from the former Soviet Union.

“Its intention is clear — to solidify China’s neighboring countries in a bid to balance and check China,” a commentary in the state-owned Global Times newspaper said on Saturday.

“The current situation in the Indo-Pacific is totally different from the Cold War. Regional countries are reluctant to take sides between China and the U.S.,” it added, speculating that the U.S. was “devoting more energy” to adding countries to the alliance, including Vietnam, South Korea and New Zealand.

Pompeo also held a separate meeting with his Australian counterpart, Marise Payne, in Tokyo on Tuesday where the pair discussed “China’s malign activity in the region,” a U.S. State Department official said in a statement. Language likely to elicit a response from Beijing.