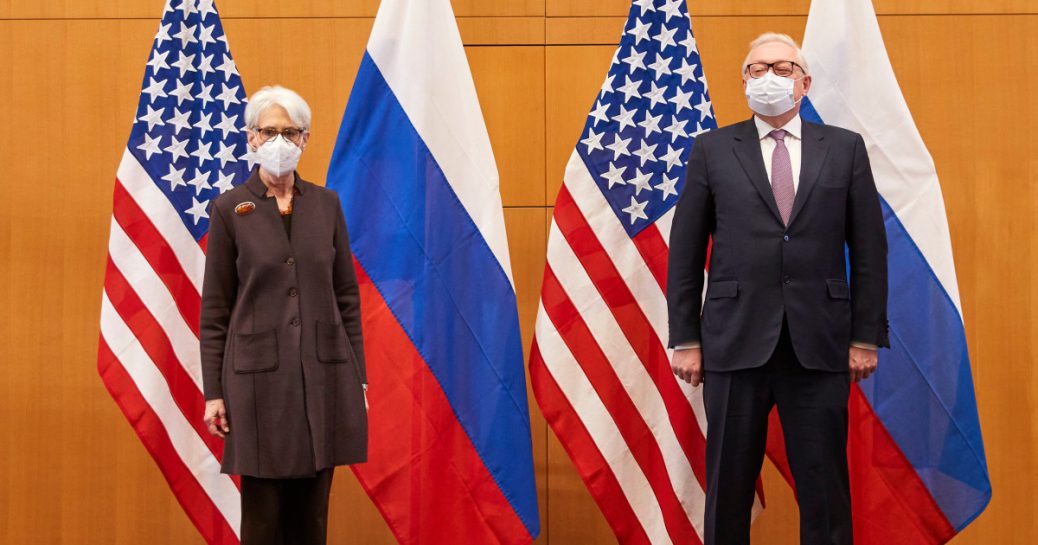 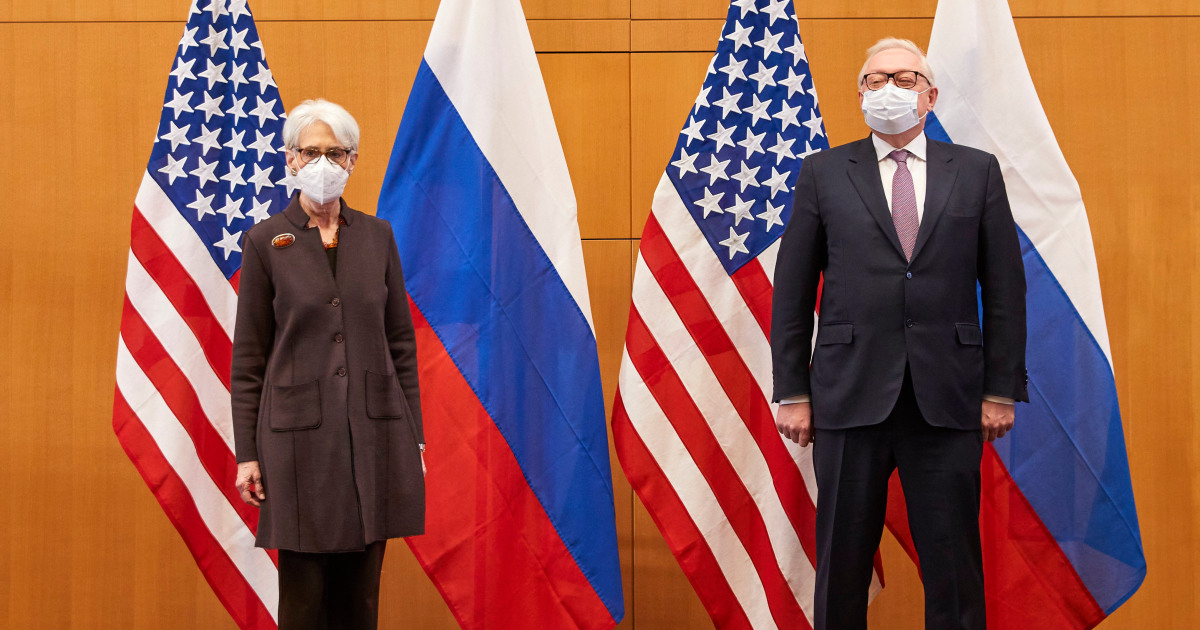 The United States and Russia concluded high-stakes security talks Monday as part of a diplomatic effort to defuse soaring tensions over a Russian military buildup on its border with Ukraine.

A breakthrough had appeared unlikely in the talks, which ended after about seven hours, with Moscow’s threats and low expectations from both sides clouding the possibility of an end to fears that Russia is planning to invade its neighbor.

Ahead of a flurry of diplomatic activity in Europe this week, Deputy Secretary of State Wendy Sherman held face-to-face talks with Russian Deputy Foreign Minister Sergei Ryabkov at the U.S. diplomatic mission in Geneva.

“If Russia stays at the table and takes concrete steps to de-escalate tensions, we believe we can achieve progress,” Sherman told reporters afterward. “But if Russia walks away from the diplomatic path, it may well be quite apparent that they were never serious about pursuing diplomacy at all.”

At a separate news conference, Ryabkov said, “We believe in a balance of powers, a balance of interests. It is possible here. We have laid out the points that we cannot back down from.”

However, the biggest point of difference remained Ukraine and NATO: Russia wants it blocked from ever joining the alliance; the U.S. says that’s a nonstarter.

While Ryabkov said “it is absolutely mandatory to make sure that Ukraine never, never ever becomes a member of NATO,” Sherman made clear that the U.S. and its allies “will not allow anyone to slam close NATO’s open-door policy.”

Russian officials are set to hold more talks with NATO and European officials later this week. They come after Russian President Vladimir Putin said the “ball is in their court” for the West to respond to a list of demands the Kremlin issued last month that would significantly redraw Europe’s security landscape and that were largely dismissed by Washington and the military alliance.

“The U.S. will listen to Russia’s concerns and share our own, but we have been clear we will not discuss European security without our allies and partners,” Sherman said in a tweet before the talks kicked off early Monday.

He said Monday that it was the U.S. and NATO’s turn to “show flexibility,” as Russia has done for the last 30 years, according to Russian news agency RIA Novosti.

Should they fail to do so, “they will face a worsening situation in their own security sphere,” Ryabkov was quoted as saying.

Ryabkov also told RIA that Russia will not deviate from its demands during the talks and “the American side must prepare for compromises” instead.

Neither U.S. President Joe Biden nor his Russian counterpart will be directly participating in the talks.

Speaking to RIA on Sunday, Ryabkov said Russia would not make concessions should the U.S. apply pressure and talk to Russia “in the regime of threats.”

U.S. Secretary of State Antony Blinken also played down expectations that the talks might produce any real solutions.

“I don’t think we’re going to see any breakthroughs next week,” Blinken said in an interview with ABC’s “This Week” on Sunday.

He warned Russia would face economic, financial and other “massive” consequences from the U.S. and its allies if Moscow “renews its aggression.”

But Blinken also previewed some of what the U.S. plans to bring to the table, including limits on troop exercises and other “confidence-building measures.”

In a separate interview with CNN’s “State of the Union,” Blinken said it was hard to make progress while Russia has “a gun to Ukraine’s head.”

“So if we’re actually going to make progress, we’re going to have to see de-escalation, Russia pulling back from the threat that it currently poses to Ukraine,” the secretary of state added.

Russia has amassed an estimated 100,000 troops near the Ukrainian border, raising fears from Kyiv and the West about an imminent invasion. Moscow has steadfastly denied that it has any plans to attack its neighbor.

Russia annexed Ukraine’s Crimean Peninsula in 2014, drawing condemnation and sanctions from the West. Shortly afterward, Moscow backed a separatist rebellion in the country’s east, where fighting has killed over 14,000 people and devastated Ukraine’s industrial heartland.

The Kremlin has been seeking a string of concessions from the U.S. and its allies, including guarantees that NATO will no longer expand eastward into former Soviet states like Ukraine and that the U.S. will roll back its military deployments in the region.

The Biden administration has repeatedly threatened sanctions and other tough steps if Russia does launch fresh military action.

On Saturday it issued new, forceful warnings, including measures that could have overwhelming costs for Russia’s economy, The Associated Press reported, citing U.S. officials.