Race to evacuate resumes, day after more than 100 are killed in Kabul blast

Home WORLD NEWS Race to evacuate resumes, day after more than 100 are killed in Kabul blast 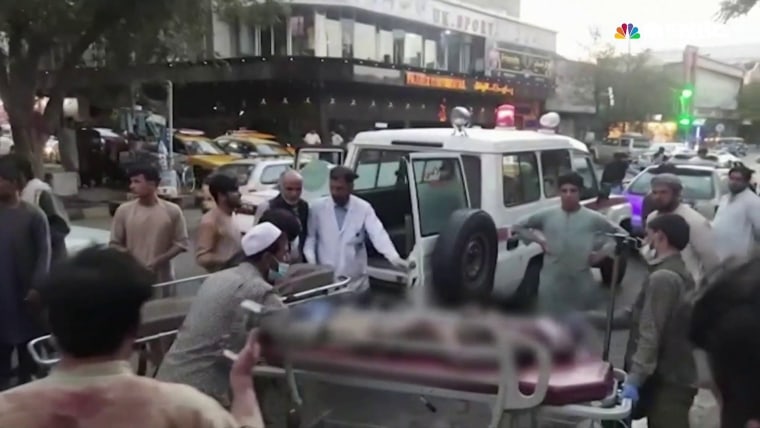 KABUL, Afghanistan — Crowds returned to Kabul’s airport Friday in an increasingly desperate attempt to escape the country a day after a terrorist attack killed more than 100 civilians and 13 U.S. service members.

Evacuation flights resumed with fresh urgency as U.S. forces braced for more attacks ahead of President Joe Biden’s deadline Tuesday to withdraw from the country.

A Navy medic, Maxton Soviak, was among the Americans killed in Thursday’s attack outside Kabul’s Hamid Karzai International Airport, his family said in a statement.

Describing him as “a wonderful son” who loved his family and community, they said that words could not “express how heartbroken we are with this news.”

The Army also confirmed in a statement that one soldier had been killed. It said no further information would be released “until 24-hours after next of kin notification is complete.”

The number of civilians killed had grown to 113 by early Friday, according to an unnamed Afghan health ministry source. At least 180 people were injured.

Even as U.S. forces rush to get many Americans and Afghan allies out of the country, the State Department is weighing whether to keep a diplomatic presence in Kabul, according to a person familiar with the discussions.

The Taliban is asking the world’s nations to maintain their ties to Afghanistan, and the Biden administration is still deciding how many, if any, diplomats Washington should keep in the war-torn nation.

In a letter sent to all State Department employees on Friday, Secretary Antony Blinken reminded his colleagues of the valor shown every day by U.S. Marines tasked with keeping Americans overseas safe.

“The State Department has a special relationship with the U.S. Marines,” Blinken said in the letter obtained by NBC News. “They guard our embassies around the world, making it possible for us to conduct diplomacy in high-risk places. We couldn’t do our jobs without them. And still in Kabul now, they’re standing guard.”

Video taken in the aftermath showed bodies of civilians in a sewage ditch, their efforts to escape a militant group’s rule destroyed by a far more radical terror group.

Mohamed Safer, 27, said he was standing outside the airport where there was no Taliban presence when he was hit during the attack.

“It was my fate that the bullet didn’t go straight (through me), and I’m alive,” he told NBC News.

Safer was taken to a hospital. “Everyone was leaving the country. I was one of them,” he said. “I just wanted to leave.”

The airport has been a hub for violent and chaotic scenes since the Taliban took control of Kabul nearly two weeks ago. The group’s fighters have patrolled the area outside, using force at checkpoints but struggling to bring order or screen those seeking access.

Each day, civilians have gathered in the sweltering heat, risking everything in a bid to make it out of the country — or make sure their children do so.

On Friday, the crowds were smaller and faced an even taller task.

One man, Ahmadullah Herawi, told The Associated Press that he believed an explosion could occur at any moment, but he had risked going to the airport anyway.

“Believe me, I think that an explosion will happen any second or minute, God is my witness,” he said. “But we have lots of challenges in our lives. That is why we take the risk to come here and we overcome fear.”

In Washington, Pentagon spokesman John Kirby told the reporters the U.S. believed there are still “specific, credible” threats to the airport.

“We certainly are prepared and would expect future attempts,” he said, adding that the U.S. was “monitoring these threats, very, very specifically, virtually in real time.”

Kirby said that just under 7,000 Afghans had entered the U.S. since the operation began.

Army Maj. Gen. William Taylor also said Friday that there had been only one explosion, at the airport gate, not at a nearby hotel, as U.S. officials had said on Thursday.

“I can confirm for you that we do not believe that there was a second explosion at or near the Baron Hotel, that it was one suicide bomber,” he said.

He added that U.S. troops wounded in the attack were now being treated in Germany.

Biden on Thursday promised to continue evacuation efforts, holding firm to his deadline of Aug. 31 for U.S. forces to complete their withdrawal despite pressure to extend it.

The president vowed to respond “with force” to the terrorists behind the attacks in an emotional speech from the White House.

But some U.S. allies have said they are ending their airlifts.

Britain said Friday its evacuations from Afghanistan will end within hours, and its main processing center for eligible Afghans has been closed. Two British nationals and the child of a third British national were killed in Thursday’s attack, Foreign Minister Dominic Raab said Friday.

After a shaky start, the pace of evacuations has increased in recent days.

The U.S. has had a military presence in Afghanistan since 2001, when it invaded and toppled the Taliban regime after the group sheltered Osama bin Laden, the founder of Al Qaeda and the mastermind of the 9/11 terror attacks.