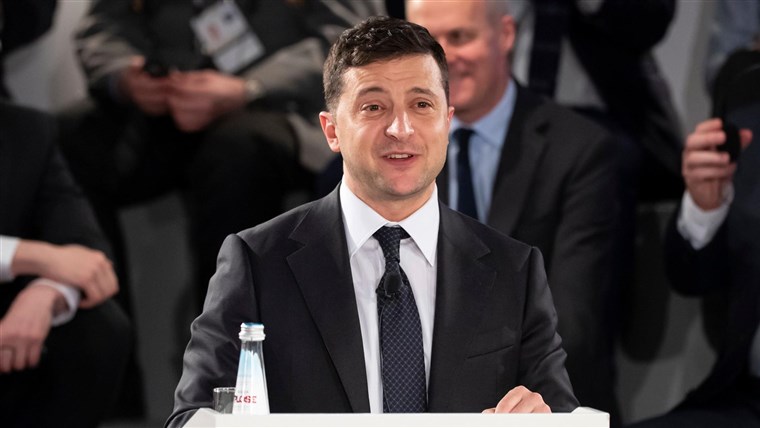 “I want Ukraine to be independent,” Mykola Mykytenko wrote on Instagram, hours before he set himself on fire in Kyiv’s central Maidan Square.

The 49-year-old died Oct. 14, three days after his extreme protest in the heart of the country’s capital, where months of massive anti-government demonstrations took place at the end of 2013 and the beginning of 2014.

His daughter Yulia told reporters at a memorial event shortly after his death that he was protesting against Ukrainian President Volodymyr Zelenskiy.

Mykytenko, a veteran of the military conflict against Russian-backed separatist forces in eastern Ukraine, which has claimed more than 13,000 lives since it began almost six years ago, was frustrated with his leader’s policy toward Moscow, she said.

Running on an anti-corruption ticket and promising to curb the power of oligarchs, Zelenskiy, a political novice who played a president on a television series, vowed to end the conflict in the east with Russia and improve relations with Moscow before he defeated incumbent President Petro Poroshenko in April 2019.

But the former comedian’s popularity has waned since he took over the leadership of the country, which sits on the frontline of the West’s standoff with Russia, as he has struggled to manage the coronavirus pandemic and revive its battered economy.

His approval rating sat at 46 percent in a national poll conducted by the highly respected Rating Group think tank earlier this month, while 51 percent said they did not trust him. However, this was higher than that of many of his rivals.

Opponents in the country of 42 million, in which a significant minority of the population uses Russian as its first language particularly in the cities and the industrialized east, have accused him of leaning too closely to the West.

Others have accused Zelenskiy, who was hospitalized with Covid-19 earlier this month, of favoring Moscow.

“Winners always lose the electoral support during the first year in power in Ukraine,” Volodymyr Paniotto, director general of the Kyiv International Institute of Sociology, said. He added that people had reverted to traditional parties, which have mobilized their resources against Zelenskiy.

This was demonstrated when the pro-Kremlin Opposition Platform for Life party — co-chaired by Viktor Medvedchuk, a close friend of Russian President Vladimir Putin — made a strong showing at local elections last month.

“They feel his lack of experience and use it against him,” Oleksandr Danylyuk, Ukraine’s former national security chief, said.

Outrage about an Oct. 28 ruling by the Constitutional Court of Ukraine has also dented Zelenskiy’s popularity both at home and abroad.

Eleven of the 15 judges struck down a compulsory asset register for public servants and removed some of the most essential powers of the key National Agency for Preventing Corruption, or NAZK, which lost the right to check the accuracy of information in the declarations of officials, as well as to carry out inspections at state agencies. Free public access to officials’ declarations was also made illegal.

The ruling also declared it illegal to hold officials criminally liable for false information in their asset declarations.

Activists claimed the ruling was part of a systematic attempt by the court to dismantle anti-corruption institutions and pointed to the fact that the lawsuit was filed by 47 pro-Russian lawmakers including Medvedchuk.

Questioning the decision a day after the ruling, Zelenskiy said that Ukraine would lose the support of the World Bank, leaving “a big hole in the budget.”

The same day, the European Union echoed his claim. In a statement, it said that the court’s decision called “into question a number of international commitments which Ukraine assumed in relation to its international partners, including the E.U.”

Zelenskiy responded by presenting a bill to annul the ruling, sack Constitutional Court justices and appoint new ones. But this was rejected by his fellow lawmakers, including several members of his ruling Servant of the People party. Some accused him of a power grab.

Instead, another bill which would restore the rules struck down by the court has been submitted. It has yet to be debated.

Zelenskiy has also been criticized for a lack of progress with Russia, although he was able to strike a deal for troops to withdraw from key front-line areas in eastern Ukraine in October 2019 and he secured prisoner exchanges in September and December 2019.

Hailing this as a success, he told NBC News last month that some of his rivals had claimed that the withdrawal would encourage attacks from Russian-backed forces. “Instead, there’s an ongoing cease-fire,” he said.

However, sporadic exchanges of fire continue along the 250-mile front line and the Organization for Security and Cooperation in Europe reports that there were almost 14,000 cease-fire violations between July and September 2020. Three civilians were killed, it said.

For some like Dmytro Filimonenko, 25, an information technology specialist from Kyiv, Zelenskiy is making progress, albeit slowly.

“I voted for Zelenskiy because I expected rapid changes,” he said. “He wants to do this. However, in a year, I understand that one person cannot change everything.”

But for veterans, some of whom tried to physically prevent Ukrainian troops from leaving the front-line, the withdrawal was seen as an act of capitulation.

Mykytenko gave up his life over the issue.

“He wanted to be heard,” his daughter Yuliya said.