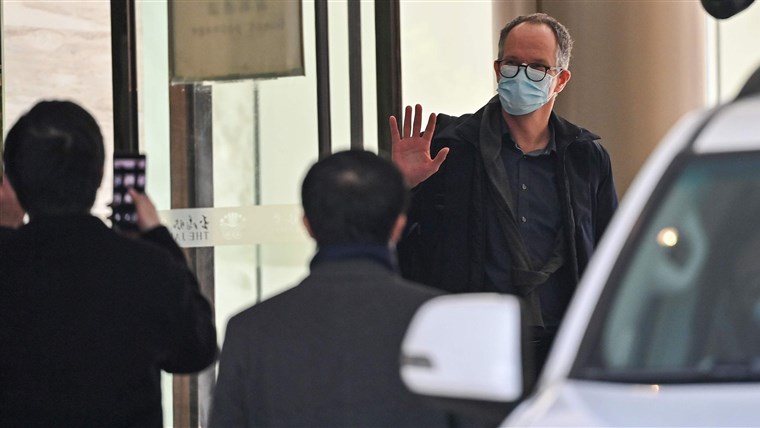 WUHAN, China — Zhang Hai has a warning to World Health Organization-led scientists researching the origin of the coronavirus in Wuhan, China: Don’t be fooled.

“If you only work behind the doors with government officials, going to places and reading documents arranged by them, you will be easily fooled,” said Zhang, who said his father died in February 2020 after going into a hospital for a routine fracture operation and contracting the virus.

As the WHO team of scientists began its field work into the origins of Covid-19 in Wuhan on Friday, Zhang is among a group of bereaved Chinese families seeking an audience with the international experts.

They accuse the authorities of concealing information about the virus at the start of the outbreak, which has since killed more than 2 million people globally, and want answers.

“If the WHO dances to their tune, the government will have a good excuse to reject the family members of dead patients that are trying to hold the government accountable,” said Zhang, who was born in Wuhan and now lives in Shenzhen.

Zhang said he has faced surveillance and harassment from Chinese authorities for making public complaints, including regular visits from the police at his home. Ahead of the WHO scientists’ visit, he said a WeChat social messaging group he is part of with around 100 bereaved individuals, was shut down.

NBC News could not independently verify his claims, and Chinese officials were not available to comment on his allegations. The WHO has not yet replied to NBC News’ requests for comment on a possible meeting with a group of bereaved family members.

However, WHO spokeswoman Margaret Harris told a briefing in Geneva on Friday that the team “will go out but they will be bused to wherever, so they won’t have any contact with the community.”

“They will only have contact with various individuals that are being organized as part of the study,” she added.

While WHO officials say they are simply in China to follow the science, Zhang’s comments are part of a highly politicized environment surrounding the trip and the origin of Covid-19.

The mission in Wuhan has already been plagued by delays, concerns over access and bickering between China and the United States, which under then-President Donald Trump accused Beijing of hiding the extent of the initial outbreak.

Beijing, meanwhile, has pushed the idea that the virus existed abroad before it was discovered in Wuhan, with state media citing the alleged presence of the virus on imported frozen food packaging.

A Chinese foreign ministry spokesman, Zhao Lijian, said Friday that WHO and Chinese experts were working together to trace the origin of the virus, but stressed the mission was not a probe.

“I’d like to stress that the exchanges and cooperation on origin-tracing between WHO experts and Chinese professionals are part of a global study, not an investigation,” Zhao told a news conference in Beijing.

“However, we know that there are geopolitics out there on every side of this. It is very intense right now…but the science will come out in the end, it pushes towards the truth.”

Daszak said he and others would analyze the data and the virus trail but were aware of the “sensitive” working environment, noting that “every side has something to lose in this investigation.”

“I think that that if the science is allowed to speak, it will help heal this wound and help us move on,” he added.

Janis Mackey Frayer is a Beijing-based correspondent for NBC News.