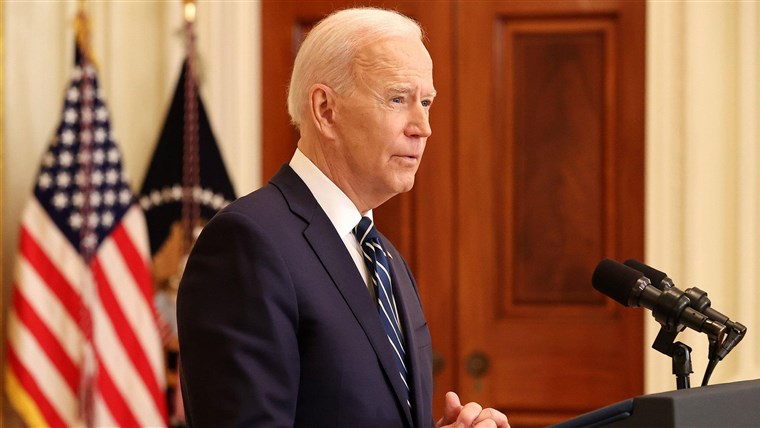 If North Korea wanted to get America’s attention, it seems to have worked.

Having brushed off two smaller missile tests less than a week ago, this time President Joe Biden condemned the ballistic missile launches, which were in violation of a United Nations resolution.

“We’re consulting with our allies and partners, and there will be responses,” Biden said during his first news conference as president Thursday. “If they choose to escalate, we will respond accordingly.”

Some experts believe attention-grabbing may have been North Korea’s goal all along: reminding Biden of North Korea’s destructive power and warning him to make a strong offer if negotiations between the two countries resume.

Though Biden described North Korea as his biggest threat, it is likely not the top priority for a presidency dominated so far by domestic coronavirus recovery and clashes with China on the global stage.

“North Korean nuclear issues were never going to be high up the Biden administration’s policy agenda,” said Tom Plant, director of proliferation and nuclear policy at the Royal United Services Institute, a London think tank. “North Korea is doing what it can to fix that. It wants to be noticed.”

This was straight out of the playbook for Pyongyang, which has a history of performing high-profile weapons tests to send messages to new U.S. administrations.

Its state-controlled KCNA news agency said the 2.5 ton missiles had accurately hit a target some 370 miles off its coast. South Korean officials previously said the distance was 270 miles.

Whatever the distance, it was an escalation and the timing seems no coincidence.

That review will say a lot about how his administration wants to deal with North Korea, a seemingly intractable problem whose solution has evaded multiple presidents across decades.

The U.S. says it has been trying in vain to make contact with the North since denuclearization talks stalled under President Donald Trump. It’s highly unlikely Biden will follow the same warlike brinkmanship adopted by his predecessor, but he has taken a far tougher rhetorical line when it comes to Kim personally, who was lionized at times by Trump but branded a “thug” by Biden last year.

Unlike Trump Biden has consistently called out North Korea’s human rights abuses, which a U.N. panel has compared to the atrocities committed by the Nazis. He has also called for the regime to abandon its nuclear weapons — something most experts say it will never do peacefully.

“I’m also prepared for some form of diplomacy, but it has to be conditioned upon the end result of denuclearization,” Biden said Thursday.

Watchdogs believe Pyongyang has as many as 60 nuclear weapons. Some experts believe it has the ability to mount these on intercontinental ballistic missiles that can strike the mainland U.S.

But North Korea does need to talk, many experts agree.

The cocktail of Covid-19, widespread flooding and international sanctions have battered the country — already isolated and largely impoverished — shrinking its economy and causing widespread food shortages.

Kim “needs to get some sort of dialogue going with the Americans that will lead to some form of sanctions relief,” John Nilsson-Wright, a senior research fellow at Chatham House, a London think tank, said.

Its display of ballistic missiles this week may be its attempt to present another type of conventional weapon that it is prepared to bargain with, according to Nilsson-Wright, who also teaches international relations and Japanese politics at Cambridge University.

While in Seoul, Blinken called on China to use its “tremendous influence” to persuade North Korea to give up its nuclear weapons.

Others say the launch was not all about the U.S.

The 2.5-ton warhead may have been an attempt at one-upmanship after South Korea tested its own missile last year with a 2-ton payload, according to Ankit Panda, a senior fellow at the Carnegie Endowment for International Peace, a Washington think tank.

“2.5-ton warhead! Someone’s keeping up with the Joneses down south,” Panda tweeted.

Markus Garlauskas, who until last year was the U.S. national intelligence officer for North Korea, similarly disagrees the launches were just “a cry for attention” from Washington.

He sees them as a sign of North Korea’s “clear determination to continue advancing its ballistic missile programs.” “If these go unchecked by the international community, this is likely to lead to launches of bigger and more capable systems, including those capable of carrying multiple nuclear warheads,” said Garlauskas, now a senior fellow with the Atlantic Council think tank.

The United Nations Security Council Sanctions Committee on North Korea will meet on Friday in response to the missile launches, a spokesperson for the U.S. Mission to the U.N. said, as the international community weighs its response.