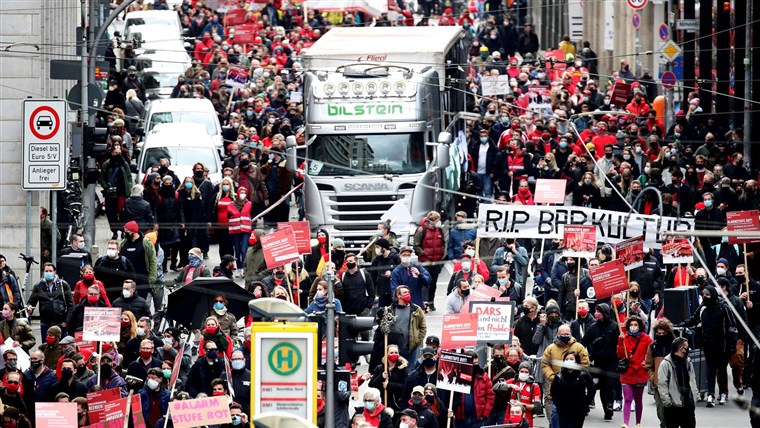 Both Germany and France announced new nationwide lockdowns on Wednesday as Europe enters a deadly new phase of the coronavirus pandemic.

Chancellor Angela Merkel says German officials have agreed to a four-week shutdown of restaurants, bars, cinemas, theaters and other leisure facilities in a bid to curb a sharp rise in coronavirus infections.

Merkel and the country’s 16 state governors, who are responsible for imposing and easing restrictions, agreed on the partial lockdown in a videoconference Wednesday. It is set to take effect Monday and last until the end of November.

Merkel said, “We must act, and now, to avoid an acute national health emergency.”

Shops and schools are to remain open, unlike during Germany’s shutdown during the first phase of the pandemic in March and April. Restaurants will be able to provide take-out food.

Merkel appealed to people not to make unnecessary journeys and said hotels won’t be able to accommodate people on tourist trips.

The decision came hours after Germany’s disease control agency said a record 14,964 new confirmed cases were recorded across the country in the past day, taking the national total in the pandemic to 449,275.

While it has fared better than many European countries during the pandemic, officials there warn that it, too, is beginning to lose control of the situation and cite the explosion of cases in the Czech Republic as a reason for earlier lockdowns.

“We can say that our health system can cope with the challenge today,” Merkel said. “But if the pace of infections continues like this, then we’ll reach the limits of what the health system can manage within weeks.”

Also on Wednesday, President Emmanuel Macron announced a second lockdown in France that will begin on Friday to try to combat a strong resurgence of the coronavirus within the country.

More than half of France’s intensive care units are already occupied by COVID-19 patients. French military and commercial planes are ferrying critically ill virus patients to other regions as hospitals fill up and French doctors have called on the government to impose a new nationwide lockdown.

With over 520 deaths recorded Tuesday, Macron said that a new nationwide lockdown would be the only possible way to successfully fight COVID-19.

“(France has been) overpowered by a second wave,” Macron said in a national televised address Wednesday. The government is scheduled to lay out further details of the new lockdown on Thursday.

Earlier, the World Health Organization said that the European region — which according to its definition includes Russia, Turkey, Israel and Central Asia — accounted for almost half of the 2.8 million new coronavirus cases reported globally last week.

The U.N. health agency said virus-related deaths were also on the rise in Europe, with about a 35 percent spike since the previous week, and that hospitalizations and ICU occupancy due to COVID-19 were increasing.

“We are deep in the second wave,” European Commission President Ursula von der Leyen told reporters in Brussels. “I think that this year’s Christmas will be a different Christmas.”

Belgium, the Netherlands, Spain, Britain and the Czech Republic have also seen a surge in new cases over the past 14 days, while infections rates in Germany were lower but climbing steadily.