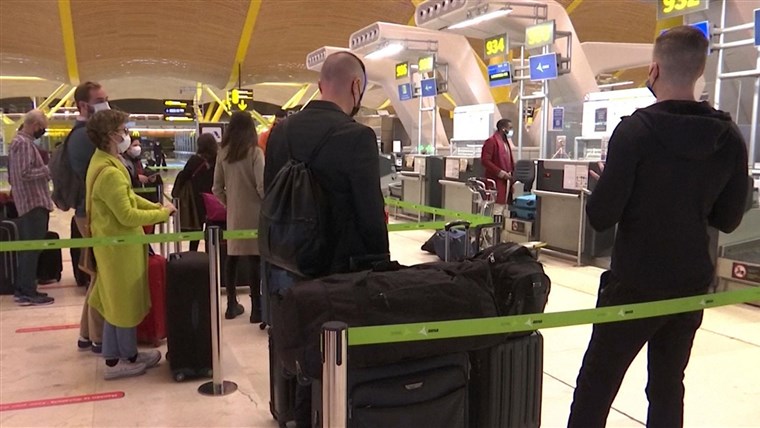 BRUSSELS — The European Union executive threw Britain a lifeline on Tuesday after it became stranded in Covid-19 isolation, recommending that E.U. members roll-back sweeping border closures to allow freight to resume and people to return home for Christmas.

Much of the world shut their borders to Britain after a mutated variant of the coronavirus was discovered spreading swiftly across southern England, halting a chunk of trade with the rest of Europe and leaving truckers stranded.

With lines of trucks snaking to the horizon in Kent, England, and supermarket shelves stripped just days before Christmas, British Prime Minister Boris Johnson scrambled to get French President Emmanuel Macron to lift a ban on freight from Britain.

Johnson and his advisers said the mutated variant of the virus, which could be up to 70 percent more transmissible, was spreading rapidly but that it had been identified because British scientists were efficient at genomic surveillance.

The European Commission advised that non-essential travel to and from Britain should be discouraged but said that people heading home should be allowed to do so, provided they undergo a Covid-19 test or quarantine for 10 days.

“Blanket travel bans should not prevent thousands of E.U. and U.K. citizens from returning to their homes,” European Justice Commissioner Didier Reynders said in a statement.

The recommendations are designed to set common rules within the E.U. and the ambassadors will consider adopting them on Tuesday. However, border controls are governed by national policy, so each E.U. country can have its own rules.

One option is to roll-out mass Covid-19 testing for truck drivers, though such tests usually take 24 to 48 hours for a result, so it was not immediately clear how swiftly trucks could be moving again, with Christmas days away.

The discovery of the new strain, just months before vaccines are expected to be widely available, sowed a fresh wave of panic in a pandemic that has killed more than 67,000 in Britain.

Scientists say there’s no evidence that vaccines currently being deployed in the U.K. — made by Pfizer and BioNTech — or other Covid-19 shots in development will not protect against this variant, known as the B.1.1.7 lineage.

The U.K. is in effective Covid-19 quarantine just nine days before it is due to finally leave the E.U. after a transition period — considered to be one of the biggest changes in post-World War Two British history.

Countries across Europe and beyond have suspended travel from Britain since the weekend. Germany imposed a ban on U.K. travelers from Tuesday that could remain in place until Jan. 6. Cases of the new strain have also been detected in some other countries, including Denmark and Italy.

The border closures have caused headaches across Europe, especially those trying to transport perishable food.

From Jan. 1, with the end of the Brexit transition period, only essential travel would be allowed from Britain unless Britain were added to an E.U. “safe country” list, which is currently composed of just eight countries.

This limitation would not apply to U.K. nationals who are residents in the E.U. or E.U. nationals resident in Britain.